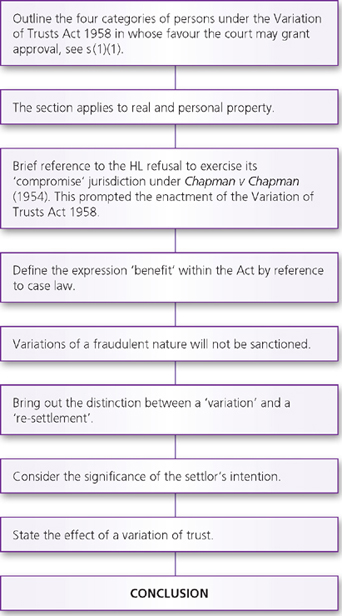 ■ understand the various methods of varying the management powers of trustees

■ distinguish between a variation of trusts and re-settlements

Trustees are required to administer the trust in accordance with its terms. They have a primary duty to obey the instructions as detailed by the settlor or implied by law. Any deviation from the terms of the trust is a breach making them personally liable, irrespective of how well intentioned the trustees may have been. But circumstances may arise, since the setting up of the trust, which indicate that the trust might be more advantageously administered if the terms were altered.

For example, authority may be needed to use funds from the trust to maintain an infant beneficiary; an investment or the impact of a potential liability to taxation may have the effect of depreciating the trust assets if no action is taken. A partitioning of the trust property between the life tenant and remainderman may have the effect of avoiding inheritance tax if the life tenant survives for seven years or more, whereas, if no action is taken, the entire capital may suffer inheritance tax on the death of the life tenant and a second time on the death of the remainder.

15.2 The rule in Saunders v Vautier

The courts drew a distinction between:

■ a variation concerning the management and administration of trusts; and

■ a variation of the beneficial interests under the trusts.

We shall now consider the first of these.

15.3 Variation of the management powers of trustees

15.3.1 Inherent jurisdiction of the court

The court has an inherent jurisdiction to depart from the terms of a trust in the case of an ‘emergency’, i.e. an occasion when no provision was made in the trust instrument and the event could not have been foreseen by the settlor. This power is very narrow and arises in order to ‘salvage’ the trust property, such as effecting essential repairs to buildings.

The power was exercised in Re New [1901] 2 Ch 534, which was described as the ‘high water mark’ of the emergency jurisdiction.

In Re Tollemache [1903] 1 Ch 955, the court refused to sanction a scheme authorising the mortgage of the life tenant’s beneficial interest in order to increase her income. There was no emergency.

The section is drafted in fairly wide terms and empowers the court to confer the authority on the trustees to perform functions whenever it is expedient to do so.


The purpose of s 57 is to secure that the trust property is managed as advantageously as possible in the interests of the beneficiaries and to authorise specific dealings with the trust property outside the scope of the inherent jurisdiction of the court. It may not be possible to establish an emergency or that the settlor could not reasonably have foreseen the circumstances which have arisen. In these circumstances the court may sanction the scheme presented for its approval.

However, there are a number of limitations within s 57. First, the scheme proposed by the trustees is required to be for the benefit of the trust as a whole and not only for an individual beneficiary. In Re Craven’s Estate (No 2) [1937] Ch 431, the court refused to sanction a scheme authorising an advancement to a beneficiary for the purpose of becoming a Lloyd’s underwriter. The scheme would not have been expedient for the trust as a whole. Second, additional powers may only be conferred on the trustees with regard to the ‘management or administration’ of the trust. No power exists under s 57 to alter the beneficial interest or to rewrite the trust administration clause as opposed to merely authorising specific dispositions or transactions. This distinction is one of degree. In Re Coates’ Trusts [1959] 1 WLR 375 and Re Byng’s Will Trusts [1959] 1 WLR 375, orders were made approving arrangements to confer wider powers of investment on the trustees. Orders approving such arrangements were frequently made between the passing of the Variation of Trusts Act in 1958 and the passing of the Trustee Investment Act 1961.

Under s 57 the courts have sanctioned schemes for the partition of land (Re Thomas [1939] 1 Ch 194); a sale of land where the necessary consent could not be obtained (Re Beale’s Settlement Trust [1932] 2 Ch 15); the sale of a reversionary interest which the trustees had no power to sell until it fell into possession (Re Heyworth’s Contingent Reversionary Interest [1956] Ch 364); blended two charitable trusts into one (Re Shipwrecked Fishermen’s and Mariners’ Benevolent Fund [1959] Ch 220); and extended investment powers of pension fund trustees (Mason v Farbrother [1983] 2 All ER 1078). 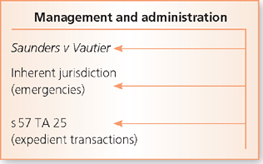 The section may not be used simply to terminate a settlement without making some new trust provision for the infant.

This section applies where land is settled. The court has the power to sanction ‘any transaction … which in the opinion of the court would be for the benefit of the settled land or the persons interested under the settlement’.

This section has a wider application than s 57 of the Trustee Act 1925, because it is not limited to managerial or administrative matters but allows alterations to be made to the beneficial interests. Moreover, it extends to both settled land and land held under a trust for sale. In Raikes v Lygon [1988] 1 All ER 884, the court decided that s 64 was wide enough to permit the creation of a second settlement.

This statutory provision was recently considered in the following case:

These sections give the court power to make property adjustment orders between spouses on divorce, separation or nullity, and this includes a power to make orders extinguishing or reducing the interest of either of the parties to the marriage.

This section gives the Court of Protection wide powers to authorise the making and variation of settlements of the property of mental patients.

The court has an inherent jurisdiction to approve compromise arrangements governing the rights of beneficiaries including infants and unborn persons under trusts. Before the House of Lords’ decision in Chapman v Chapman [1954] AC 429, there was some doubt as to whether the jurisdiction existed if there was not a genuine dispute between the beneficiaries. The House of Lords in that case clarified the meaning of the expression ‘compromise’, by deciding that its jurisdiction concerned cases of genuine disputes about the existence of rights.

The Variation of Trusts Act 1958 was passed in order to reverse the decision of the House of Lords in Chapman v Chapman (1954) and to introduce sweeping changes in the law. The jurisdiction of the courts was extended in order to approve variations of trusts (in respect of both administrative matters and beneficial interests) on behalf of infants, unborn persons and others who lacked the capacity to consent to an arrangement. The court is entitled to sanction ‘any arrangement varying or revoking all or any trusts or enlarging the powers of the trustees of managing or administering any of the property subject to the trusts’.

The court in its discretion may make an order approving a scheme, provided that the following four conditions are satisfied:

1. property, whether real or personal, is held on trust; and

2. the trust was created by will or inter vivos settlement or other disposition; and

In Allen v Distillers Co (Biochemicals) Ltd [1974] QB 384, the court decided that the Act was not applicable to an out-of-court settlement of litigation.

In D (a child) v O [2004] 3 All ER 780, the High Court decided that it had the power to lift the statutory limitation that exists under s 32 of the Trustee Act 1925 (power of advancement). This power was exercisable under the Variation of Trusts Act 1958, whereas, in Allen v Distillers (see above) the court ruled that it did not have jurisdiction to modify an interest under the VTA 1958. However, in the present case the court distinguished Allen v Distillers on the ground that Eveleigh J was not considering the sort of case of absolute entitlement that was before the court on this occasion. In D v O, what was proposed would have the effect of accelerating the benefit to the claimant by allowing the whole of the claimant’s fund or capital to be used for her benefit while she was still under age. It could not have been for the claimant’s benefit to divert any part of the fund from her.

Generally, the court may consent on behalf of potential beneficiaries who have a contingent interest in the trust (see s 1(1)(b)), i.e. ‘a person who may become entitled … to an interest’, for example a future spouse of a beneficiary. But the proviso to s 1(1)(b) prevents the court from approving on behalf of adult beneficiaries who are ascertainable and stand only one step removed from entitlement under the trust. It was the intention of Parliament that such persons should be allowed to consent for themselves.

For example: trustees hold property on trust for A for life with an ultimate remainder for his next of kin. A is a widower with one son, B (adult). A scheme is proposed in order to divide the fund equally between A and B. In such a case B is required to consent to the arrangement under the proviso to s 1(1)(b), on the ground that B is only one step removed from acquiring a vested interest, namely the death of A. This principle may be illustrated by the following case.

In Knocker v Youle [1986] 1 WLR 934 the court decided that it could not grant its approval on behalf of beneficiaries with contingent interests in the trust property.

Although the 1958 Act gives the court a wide discretion to approve a scheme varying the terms of a trust, there appears to be a limitation on this discretion. The courts have adopted the policy of not ‘rewriting’ the trust. Accordingly, a distinction is drawn between a ‘variation’ and a ‘re-settlement’. A ‘variation’ retains the basic fundamental purpose of the trust but alters some important characteristic of the trust, whereas a ‘resettlement’ destroys the foundation or substance of the original design or purpose of the trust. Whether a scheme amounts to a variation or a re-settlement will vary with the facts of each case.

‘Variations of trust may affect the trustees’ managerial powers and duties and also the interests of the beneficiaries.’


Only gold members can continue reading. Log In or Register to continue