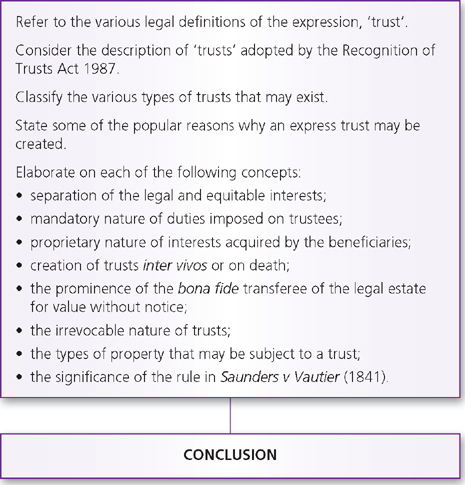 ■ identify the essential characteristics of trusts

■ grasp the various types of trusts that exist

Constructing a comprehensive definition of a trust is extremely difficult, for a variety of trusts exist, and some of these do not fit into any of the traditional definitions. It is much simpler to describe a trust and identify its essential characteristics. In essence, the mechanism of the trust is an equitable device by which property is acquired and controlled by trustees for the benefit of others, called beneficiaries. These beneficiaries, subject to a few exceptions, are entitled to enforce the trust. For a variety of reasons, it may be prudent to prevent the entire ownership of property (legal and equitable) being vested and enjoyed by one person because such person would be in a position to dispose of the entire interest, perhaps for an inappropriate purpose such as gambling away the entire fund. A trust may be set up in order to advance this objective.

By origin, the trust was the exclusive product of the now defunct Court of Chancery, but since the Judicature Acts 1873 and 1875, trusts may be enforced in any court of law.

The trust has been defined, or described, by many academics and, recently, by statute. The classic definition of a trust was stated by Underhill as follows:


This definition does not include charitable and private purpose trusts, but Underhill was merely defining traditional private trusts. A private purpose trust is intended to benefit objects which do not have the capacity to enforce the trust (such as maintaining a grave in a cemetery), as distinct from benefiting society as a whole or the public at large. Charitable trusts are distinct from private trusts in many ways (see Chapter 12), and the Attorney General, as a representative of the Crown, is empowered to enforce such trusts on behalf of the public. Private purpose trusts (or trusts for imperfect obligations) in any event are considered anomalous and are exceptionally treated as valid. Underbill’s definition of a trust refers to an ‘equitable obligation’ in that originally the Lord Chancellor and later the Court of Chancery enforced moral obligations undertaken by trustees (feoffees) in the interests of natural justice and conscience. The definition refers to property under the ‘control’ of trustees. It is evident that the trustees have the legal title to property but the essence of a trust is that they are required to hold the property for the benefit of the beneficiaries. It is because of the fiduciary position of the trustees and the temptation to abuse their position that a number of duties are imposed on the trustees. Finally, the beneficiaries, by definition, are the persons who are entitled to enjoy the benefit of the trust property and who are given a locus standi to enforce the trust and to ensure that the trust property is properly administered.

A person whose judgment and skill is relied on by another.


It may be noted that this is a vague definition of a trust, as Maitland admitted, but, on examination, it is not a definition at all, but a description of some of the elements of a trust.

In Lewin on Trusts a comprehensive definition set out by an Australian judge, Mayo J, in Re Scott [1948] SASR 193 was referred to in the text.


The American Restatement of the Law of Trusts (1959) declares:


G Thomas and A Hudson in The Law of Trusts (Oxford University Press, 2004) offer a definition of a trust in this form:


The ‘equitable obligation’ that is referred to in Thomas and Hudson’s definition is a reference back to the historical origin of trusts which were recognised only by equity prior to the Judicature Act 1873. The obligation to carry out the terms of the trust is attached to the trustee to control his actions as a fiduciary and to allay the fears that he may be tempted to take the property or otherwise abuse his position. The trustee acquires the legal title to the property and the beneficiary, as an equitable owner, acquires the right to enjoy the property.

During the lifetime or before death.

A trust has the following characteristics:

(a) the assets constitute a separate fund and are not a part of the trustee’s own estate;

(c) the trustee has the power and the duty, in respect of which he is accountable, to manage, employ or dispose of the assets in accordance with the terms of the trust and the special duties imposed upon him by law.

The reservation by the settlor of certain rights and powers and the fact that the trustee may himself have rights as a beneficiary are not necessarily inconsistent with the existence of a trust.

This description of a trust has been formulated by reference to the characteristics of a trust (these are discussed below).

The reference to the ‘conscience’ of the trustee concerns the original assumption of jurisdiction by the Lord Chancellor for enforcing trusts. The trustee is treated as a fiduciary with special duties imposed on him. If they abuse their position as fiduciaries by receiving unauthorised profits they become trustees of those profits. This notion of conscience requires the trustees to be aware that they are acting with impropriety. It is evident that the trust is required to attach to identifiable property, except with regard to the liability to account as an accessory. Finally, Lord Browne-Wilkinson declares that a beneficiary under a trust acquires a proprietary interest in the trust property (i.e. a right in rem). The effect is that the beneficiary is entitled to recover the property in either its original or substituted form, except as against a bona fide transferee of the legal estate for value without notice (‘equity’s darling’).

A right that exists against the world at large as opposed to in personam.

2.3 Characteristics of a trust

The distinctive features of a trust are outlined below. It is submitted that an understanding of these features is a more practical way of recognising and distinguishing a trust from other concepts.

These are personal, intangible property(ies) such as rights to have a loan repaid, the right to dividends from shares and intellectual property.

2.3.2 Separation of legal and equitable interests

These are rights that do not currently exist but may or may not exist in the future.

In addition, the same interests may be enjoyed jointly by the same persons under a trust. For example, T and B may hold the legal estate on trust for T and B equally.

If, however, the legal and equitable interests are united in the hands of the same person without a separation of interest, no trust exists. Thus, no trust exists if T holds the legal estate for himself absolutely.

The new arrangement may be illustrated as follows:

It should be noted that in respect of the sub-trust, B will have active duties to perform on behalf of his new beneficiary, C.

A trust is mandatory in nature. The trustees have no choice as to whether they may fulfil the intention of the settlor. Instead, the trustees are required to fulfil the terms of the trust as stipulated in the trust instrument and implied by rules of law. The beneficiaries are given a locus standi to ensure that the trustees carry out their duties (but note the anomalous nature of private purpose trusts – see Chapter 11).

The right to be heard in court or other proceedings.

A document signed by the testator and attested by two or more witnesses which disposes of the testator’s assets on his death.

Trusts may be created either inter vivos (during the lifetime of the settlor) or on death, by will or on an intestacy (under the Administration of Estates Act 1925, as amended). An inter vivos trust may be created by deed or in writing other than by way of a deed, orally or by conduct. Irrespective of the form which the trust takes, the trust becomes effective from the date of the execution of the document or statement. On the other hand, trusts created by wills or on intestacies take effect on the death of the testator or person dying intestate.

A person who dies without making a valid will. His estate devolves on those specified under the intestacy rules.

The settlor’s position vis-à-vis the trust is analagous to the position of a promoter (or shareholder) of a company and his relationship with the company. The well-known, fundamental rule in company law is that a company is an artificial legal person, distinct from its members. Thus, a company is capable of enjoying rights and is subject to duties which are generally not attributable to its members. In other words a company may own property, enter into contracts, sue and be sued and open and operate bank accounts in its own name. The rights and liabilities of the company are treated separately from the rights and duties of the members or shareholders. Accordingly, even if a company is controlled by one shareholder, the company and that shareholder are treated as distinct legal persons. This is known as the doctrine in Salomon v Salomon & Co Ltd [1897] AC 22. A company was formed to take over Mr Salomon’s business and the House of Lords ruled that, despite Mr Salomon holding 20,001 of the 20,007 shares issued by the company, the company and Mr Salomon were distinct legal entities. Lord Macnaghten expressed the general rule thus:

The same general principle of independent legal personality of a company (or corporate veil) was affirmed by the Supreme Court in Prest v Petrodel Resources Ltd [2013] 2 AC 415. However, the corporate veil may be lifted in limited circumstances when the notion of separate legal personality is abused for the purpose of promoting some wrongdoing. The test was stated by Lord Sumption in Prest v Petrodel in the following manner:

The trustees are the representatives of the trust. Owing to the opportunities to abuse their position the rules of equity were formulated to impose a collection of strict and rigorous duties on the trustees. Indeed, trustees’ duties are so onerous that they are not even entitled to be paid for their services as trustees, in the absence of authority.

Trustees are liable in their personal capacity for mismanaging the trust funds and in extreme cases may be made bankrupt, should they neglect their duties.