Formalities for the Creation of Express Trusts 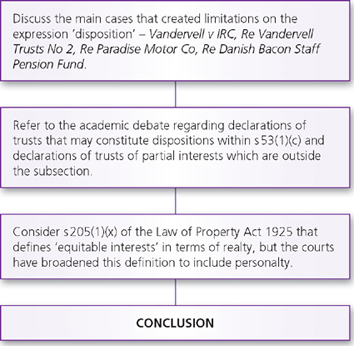 Formalities for the creation of express trusts

■ recognise when the formalities are relevant in a problem question

As a general rule, equity does not insist on special formal requirements in order to create an express trust: ‘Equity looks at the intent rather than the form.’ However, occasionally Parliament has intervened and has imposed a number of formal requirements. These formalities vary with the subject-matter of the trust, such as land, the nature of the interest involved, such as an equitable interest, and the mode of creation, such as inter vivos or by will. These formalities are distinct from the necessary pre-conditions (see Chapter 4) needed to be satisfied in order to transfer the property to the trustees and so constitute the trust. Many of these formalities were originally enacted in the Statute of Frauds 1677. This was a statute passed in order to prevent fraud and require writing in appropriate circumstances. This chapter will consider the formal requirements for the creation of an inter vivos trust of land and the inter vivos transfer of an equitable interest by a beneficiary under a subsisting trust.

5.2 Declaration of a trust of land

The subsection is only applicable to inter vivos trusts concerning land and not personal property, thus, a trust concerning one square inch of land is subject to the subsection, but a trust of £1 million of personalty may be declared orally.

‘Land’, under Sched 1 to the Interpretation Act 1978, ‘includes buildings and other structures, land covered with water, and any estate, interest, easement, servitude or right in or over land’.


Thus, included in the definition of ‘land’ are all rights to the land. In addition, s 2(6) of the Law of Property (Miscellaneous Provisions) Act 1989 defines an ‘interest in land’ as ‘any estate, interest or charge in or over the land’. Thus, a mortgagee’s right over the land is treated as an interest in land.

Section 53(1)(b) of the Law of Property Act 1925 is only applicable in respect of declarations of trusts as the means of benefiting another. A declaration of trust was examined in Chapters 3 and 4. The test is whether a present, irrevocable intention to create a trust was manifested by the settlor. This requires the settlor to comply with the ‘three certainties’ test: certainty of intention, subject-matter and objects.

5.2.3 ‘Manifested and proved by some writing’

For instance, on Day 1, S, a settlor orally declares a trust in respect of land in favour of B, absolutely. This declaration is within s 53(1)(b) of the LPA 1925 and, because it is not supported by writing, it is unenforceable. However on Day 2, S executes a document endorsing the terms of the trust declared on Day 1. The trust is now enforceable, not from Day 2, but retrospectively, from Day 1.

The effect of non-compliance with s 53(1)(b) is to render unenforceable the valid declaration of trust.

‘Writing’ for these purposes does not assume any special mode and has taken the most diverse set of forms, ranging from recitals in an instrument to affidavits, answers to interrogatories, telegrams and even letters to third parties. In short, writing may take any form that may be appropriate for the Land Registry. The test is whether the material terms of the trust are included in a document (or series of documents) signed by the settlor. The material terms, of course, involve the ‘three certainties’ test.

In the law of evidence a ‘document’ has been defined in s 13 of the Civil Evidence Act 1995 as ‘anything in which information of any description is recorded’. Thus, a document for these purposes may include an audio or video cassette, and even information stored in electronic form. But this notion of a document may be too broad to constitute ‘writing’ for the purposes of the Law of Property Act 1925. The objective under the 1925 Act assumes the delivery of the terms of the trust to the Registrar, for the purposes of registration in the Land Registry.

This requirement is fundamentally different from the test enacted in s 2(1) of the Law of Property (Miscellaneous Provisions) Act 1989 concerning contracts for the sale or other dispositions of land. Under this Act the terms of the contract are required to be included in one document.

Section 53(1)(b) of the Law of Property Act 1925 requires the person able to declare the trust to sign the document(s). The requirement here is that the settlor must endorse the document containing the terms of the trust. The signature need not be the full, formal signature of the settlor but may take the form of some mark attributed to the settlor and intended by him to authenticate the document(s). Thus, initials or the thumbprint of the settlor will be sufficient. Section 1(4) of the Law of Property (Miscellaneous Provisions) Act 1989 enacts that ‘ “sign” in relation to an instrument includes making one’s mark on the instrument and “signature” is to be construed accordingly’. Likewise, the settlor’s voice or image on a recording may amount to a signature.

However, the signature of the settlor’s agent is not effective for these purposes.

Section 53(2) of the Law of Property Act 1925 (replacing s 8 of the Statute of Frauds 1677) provides that ‘This section shall not affect the creation or operation of implied, resulting and constructive trusts.’ Resulting and constructive trusts are types of implied trusts that are created by the courts. These trusts are exempt from the above formal requirement. Accordingly, an inter vivos resulting trust of land may arise without the terms being reduced into writing.

In Hodgson v Marks (1971) it would have been ironic that the precursor to s 53(1)(b) of the LPA 1925, namely s 7 of the Statute of Frauds 1677, a statute passed to prevent fraud, could have been used to perpetrate a fraud, but for s 53(2) of the LPA 1925. In any event, a similar conclusion could have been reached by adopting the constructive trust institution, namely to prevent a fraud being committed on Mrs Hodgson. In such a case the court could have applied the maxim, ‘Equity will not allow a statute to be used as an engine for fraud’ as illustrated in Rochefoucauld v Boustead [1897] 1 Ch 196 (see later in Chapter 8).


Rationale of the provision

(i) prevent fraud by prohibiting oral hidden transfers of equitable interests under trusts; and

(ii) assist trustees by enabling them to identify the whereabouts of the equitable interest subsisting under a trust: see Lord Upjohn in Vanderveľl v IRC [1967] 2 AC 291:

The effect of non-compliance with this provision is that the purported disposition is void. This is distinct from s 53(1)(b): see above. The wording of the statutory provision (s 53(1)(c)) is mandatory in nature. The operative words are ‘must be in writing’.

An essential restriction on the operation of s 53(1)(c) is that it is applicable only to subsisting equitable interests. In other words, the provision is applicable to the interest of a beneficiary under a subsisting trust. The subsection is not applicable to the original creation of a trust, but is activated only when a beneficiary under a trust seeks to dispose of his interest. For instance, S, a settlor, transfers property to the trustees, A and B, to hold property upon trust for С absolutely. Thus, A and В hold the legal title to property and С enjoys the equitable interest. The formalities that S will need to comply with, if any, will depend on the type of property concerned. But this arrangement does not involve s 53(1)(c). If С wishes to dispose of his equitable interest (subsisting) he is required to comply with the statutory provision. A subsisting equitable interest may exist under any type of trust, express, resulting, constructive or statutory.

Writing is not required to be included in a formal document but within this limitation may take a variety of paper forms such as letters and telegrams. The test is whether a permanent form of representation exists of the transfer of the relevant interest (see earlier regarding s 53(1)(b)).

The signature of the disponer or his agent may take any form which endorses the document, including thumb prints, initials and perhaps the disponer’s voice on a tape recording: see above.

The section authorises the signature of an agent, provided the agent was lawfully authorised in writing. The position here is different from s 53(1)(b): see above.

The key feature of s 53(1)(c) is the meaning of the term ‘disposition’. This has not been defined in the statute. But the term ‘conveyance’ has been defined in s 205(1)(ii) of the Law of Property Act 1925 as including a disposition. The subsection provides as follows:

Romer LJ, in his second classification of a disposition in Yerbury (1936), declared that a direction by a beneficiary under a subsisting trust to the trustees (holding the legal title) to hold upon trust for another beneficiary is within s 53(1)(c). For instance, S creates a trust of 50,000 shares in BT plc to T1 and T2, as trustees, by transferring the legal title to the shares for the benefit of В absolutely. If В directs T1 and T2 to hold the property on trust for C, this intended disposition would be within s 53(1)(c). Thus, В is required to issue the direction in writing otherwise it is void.

In Grey v IRC [1960] AC 1, HL, the House of Lords decided that an oral direction by an equitable owner to the trustees of a trust fund to hold the property upon trust for another was a purported disposition and void for non-compliance with s 53(1)(c).

Held: The oral instructions by Mr Hunter were ineffective and void for non-compliance with s 53(1)(c), but the confirmatory documents had the effect of transferring the equitable interests to the grandchildren. Accordingly, the documents were stampable.