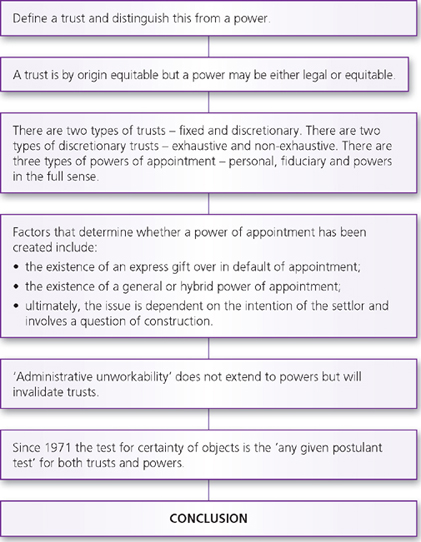 ■ contrast a discretionary trust with a power of appointment

A discretionary trust exists where the trustees are given a discretion to pay or apply property (the income or capital or both) to or for the benefit of all or anyone selected from a group or class of objects on such terms and conditions as the trustees may see fit. In tax law this type of trust is known as a trust without an interest in possession. The trust is created in accordance with the express intention of the settlor. The relevant property is transferred to the trustees and the scope of the trustees’ discretion expressed in the trust instrument.

For example, S, a settlor, transfers a cash fund of £100,000 to trustees on trust to pay or apply the income and capital (including accumulations of income) to or for the benefit of any or all of the settlor’s children, A, B and C, as the trustees may decide in their absolute discretion.

The instrument setting out the terms of an express trust.

The alternative type of express trust that may be created is a ‘fixed’ trust or a trust with an interest in possession. This is the case if, on the date of the creation of the trust, the settlor has not only identified the beneficiaries under the trust but also quantified the interest vested in each beneficiary. Thus, each beneficiary is entitled to sell, exchange or gift away his interest, subject to provisions to the contrary as detailed in the trust instrument. In a fixed trust the trustees do not have a discretion to decide the extent of the beneficial interest which the objects may enjoy, for example trustees hold specified property on trust for the children of the settlor, D, E and F, in equal shares absolutely. On the date of the creation of the trust, each beneficiary has a fixed one-third share of the fund that he may retain or dispose of as he likes.

Under a discretionary trust, the individual members of the class of objects have only a hope or ‘spes’ of acquiring a benefit under the trust. In other words, under a discretionary trust, the members of the class of objects, prior to the exercise of the trustees’ discretion, do not enjoy an interest in the trust property but are treated as potential beneficiaries and are incapable of disposing of their potential interests by way of a trust.

A discretionary trust may be either ‘exhaustive’ or ‘non-exhaustive’. This is determined by reference to the intention of the settlor.

It follows that the distinction between an exhaustive and non-exhaustive discretionary trust is based on the power of the trustees to refrain from distributing the property that is within the discretion of the trustees. In the ordinary course of events the trustees will be required to accumulate the income that has not been distributed. The accumulated income is treated as capitalised income or capital in both trust law and tax law. In IRC v Blackwell Minor’s Trustees (1925) 10 TC 235, the accumulation of undistributed surplus income at the discretion of the trustees was treated as capital of the beneficiary, and not liable to income tax.

Prior to its abolition, the period of accumulation was determined by reference to a number of statutory provisions. The combined effect of s 164 of the Law of Property Act 1925 and s 13 of the Perpetuities and Accumulations Act 1964 was that the settlor became entitled to select any one (but only one) of a specified number of periods as the maximum period during which the trustees may accumulate the income. These periods were unduly complex, and outlived their usefulness.

The Perpetuities and Accumulations Act 2009 was passed, following the recommendations of the Law Commission in its report published in 1998. The Law Commission analysed the policy behind the rule against excessive accumulations and decided that the application of the current principles were disproportionate and unnecessarily complex, and ought to be abolished, except for charitable purposes, where the period ought to be modified. The reason for dealing separately with charitable trusts is that it was regarded as being in the public interest to restrict the period for which income may be accumulated. In its report, the Law Commission concluded as follows:


Sections 13 and 14 of the Perpetuities and Accumulations Act 2009 reflected the opinion of the Law Commission. This Act came into force on 6 April 2010. Section 13 introduced the general principle and abolished the rule against excessive accumulation, except for charities. The effect is that in the case of a non-charitable trust, the trustees are entitled to accumulate the trust income for as long as they consider reasonable.

Section 13 of the Perpetuities and Accumulations Act 2009:


With regard to charitable trusts, the Law Commission’s recommendation for a modification of the accumulation period was enacted in s 14 of the Perpetuities and Accumulations Act 2009. It was considered to be in the interest of the public that charitable income, including accumulated income, be distributed within a short period of time. This was considered to be a period of 21 years. Thus, income accumulated for charitable purposes is required to be distributed by the trustees within 21 years from the date that the income accrued. A power inserted in the trust instrument which exceeds the statutory period is valid for 21 years and void in respect of the excess period.

Where a settlor wishes to make a present disposition on trust but is uncertain as to future events and would like the trustees to react to changed circumstances and the needs of the potential beneficiaries, he may create a discretionary trust. This would require the trustees to take into consideration the circumstances, including fiscal factors surrounding individual members of the class of objects. The trustees may well take into account that the distribution of income will be more tax-efficient if paid to objects with lower income, and transfers of capital may be more beneficial to those with larger incomes. The effect is that the discretionary trust has the advantage of flexibility. The settlor may nominate himself as one of the trustees and, even if he does not, he may still be entitled to exercise some influence over the trustees.

6.4.2 Protection of objects from creditors

The settlor may authorise another or others to distribute property to a class of objects but without imposing an obligation to distribute the same. This is called a mere power of appointment (or bare power, or power collateral).

For example, S may transfer property by will to his widow, W, for life with remainder to such of his children A, B and C, as W may appoint by will. W is referred to as a donee of the power and A, B and C as the objects of the power. They are not beneficiaries but, like the objects of a discretionary trust, are potential beneficiaries or have a ‘spes’ of enjoying a benefit prior to the exercise of the power in their favour. If W makes a valid appointment in favour of the objects they become beneficiaries in respect of the amount of property distributed in their favour. On the other hand, if the donee of the power fails to make an appointment, the property is held on resulting trust for the settlor or his estate.

Of first appearance, or on the face of it.

gift over in default of appointment

An alternative gift in the event of a failure to distribute property under a power of appointment.

In order to dispense with the resulting trust, it is customary for the settlor to insert an ‘express gift over in default of appointment’ in the trust instrument. If this clause is inserted, the objects under the ‘gift over’ take the property unless the donee of the power validly exercises the power. Indeed, prima facie, the individuals entitled on a gift over in default of appointment are entitled to the property subject to such interest being defeated on a valid exercise of the power.

It was pointed out in Chapter 3 that a mere power of appointment may be ‘personal’ or ‘fiduciary’. A ‘personal’ power is one granted to a donee of the power in his personal capacity, such as the testator’s widow in the above example. Such powers impose no duties on the donee of the power, save for a distribution in favour of the objects if the appointor wishes to exercise his discretion. Conversely, a fiduciary power is created where the appointor acquires the property in his capacity as a fiduciary or trustee. A number of fiduciary duties are imposed on the appointor. These were listed by Megarry VC in Re Hay’s Settlement Trust [1982] 1 WLR 202, as a duty to consider periodically whether or not the power ought to be exercised, a duty to consider the range of objects of the power and a duty to consider the appropriateness of individual appointments.

Both personal and fiduciary powers may be released by the appointor, but Warner J in Mettoy Pension Fund Trustees Ltd v Evans [1990] 1 WLR 1587, created a further category of powers, called ‘fiduciary powers in the full sense’. The distinctive feature of this last type of power is that it cannot be released by the appointor. If the donee of the power fails to exercise his discretion the court will ensure that the discretion is exercised in favour of the objects.

On the other hand, in Re Weekes’s Settlement [1897] 1 Ch 289, the court, on construction of the instrument, concluded that a mere power was created.

Ultimately, the question whether a ‘mere power of appointment’ or a ‘trust power’ was created varies with the intention of the settlor. This is a question of fact. Decided cases illustrate how unpredictable this question is likely to be. There are two types of gifts that are consistent with the conclusion that a mere power of appointment was intended by the settlor. These are:

■ The creation of an express gift over in default of appointment. This is an express alternative gift in the event of the donee of the power failing to exercise the power. The settlor has made provision by declaring alternative beneficiaries in the event of the failure to exercise the power, for example ‘50,000 is transferred to trustees to distribute the income for a period not exceeding 15 years in favour of such of the relatives of the settlor as the trustees may decide in their absolute discretion. In the event of the trustees failing to distribute any part of the income to the relatives, Mr X will be entitled to the same’. In this case the clause entitling Mr X to a beneficial interest is an express gift over in default of appointment. The material feature is that the clause is only activated if the trustees fail to distribute the property in favour of the relatives of the settlor. Re Mills [1930] 1 Ch 654 illustrates this principle.

In Blausten v IRC [1972] Ch 256, the settlement gave the trustees the power to introduce any person other than the settlor as a member of a class of objects, but subject to the written consent of the settlor. It was held that a hybrid power of appointment was created.

Likewise, in Re Manisty’s Settlement [1973] 3 WLR 341, the court decided that a hybrid power was created. In this case the trustees were given a power to add objects to a class of potential beneficiaries which excluded the settlor, his wife and certain named persons.

Figure 6.1 Classification of private trusts and types of discretions