Appointment, Retirement and Removal of Trustees 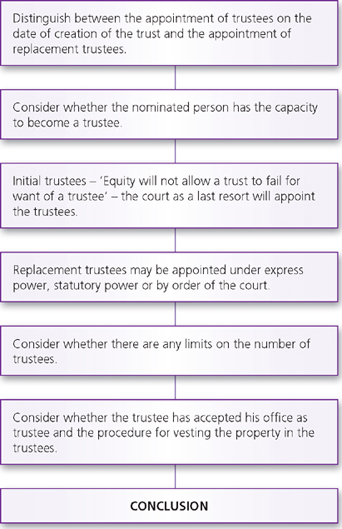 Appointment, retirement and removal of trustees

■ identify when and how an appointment of trustees may be made

■ appreciate the occasions when a trustee may be removed from office

The settlor has the freedom to select eligible persons to be the first trustees. He may appoint the trustees inter vivos or by his will. In the case of an inter vivos trust the settlor is required to transfer the property to the trustees for failure to achieve this result will make the trust imperfect. In the case of a trust created on the settlor’s death, the trust can never be imperfect for the settlor has managed to part with the trust property. If he does not name the trustees in his will or those named are unable or unwilling to act, the trust will still be valid for it is completely constituted and the maxim is ‘Equity will not allow a trust to fail for want of a trustee.’

There are only two occasions when it may be necessary to appoint trustees:

■ on the creation of a new trust – whether inter vivos or by will; and

■ during the continuance of an existing trust, either in replacement of a trustee or as an additional trustee.

The settlor or testator who creates a trust usually appoints the first trustees. If, in purported creation of a trust inter vivos, the settlor fails to nominate trustees, the intended trust will be imperfect. This principle, however, does not extend to trusts created by wills because, on the death of the testator, the trust becomes completely constituted. The deceased would have managed to part with the trust property. On the assumption that the trust is completely constituted, but the testator does not name trustees in his will or the trustees named are unwilling or unable to act, a replacement trustee will be appointed as on a continuance of the trust (see below). The principle applied here is that ‘Equity will not allow a trust to fail for want of a trustee.’

When a trust is created (whether inter vivos or by will) the trust property (real or personal) vests in all the trustees as joint tenants. The effect is that on the death of a trustee the property devolves on the survivors. This is the effect of s 18(1) of the Trustee Act 1925.

On the death of the sole or surviving trustee, the property vests in his personal representatives, subject to the trust, until replacement trustees are appointed. This principle is enacted in s 18(2) of the Trustee Act 1925.

The authority to appoint replacement trustees is derived from three sources, namely:

This hierarchical order of authority to appoint trustees is required to be followed strictly. It is only when there is no person in one group willing to make an appointment that the power can be exercised by a person in a different group: see Re Higginbottom [1892] 3 Ch 132, where the majority of the beneficiaries under a trust were not able to prevent the sole executrix of the sole surviving trustee from appointing new trustees.

Similarly, where two or more persons have the power to appoint new trustees, they are required to exercise the authority jointly, unless there are express provisions to the contrary. It follows that such a joint power cannot be exercised where one of the appointors dies or cannot agree on the candidate to be appointed as trustee. This was decided in Re Harding [1923] 1 Ch 182.

There are seven circumstances listed in s 36(1) when a replacement trustee may be appointed. These are:

1. When a trustee is dead. Under s 36(8), this includes a person nominated as trustee under a will but predeceasing the testator.

3. Where a trustee desires to be discharged from all or any of the trusts or powers reposed in or conferred on him. Thus, a trustee may retire from part only of the trust.

4. Where a trustee refuses to act. This includes the occasion when the trustee disclaims his office. It is advisable that the disclaimer be executed by deed.

5. Where a trustee is unfit to act. Unfitness refers to some defect in the character of the trustee which suggests an element of risk in leaving the property in the hands of the individual, for example a conviction for an offence involving dishonesty or bankruptcy (see Re Wheeler and De Rochow (1896)).

6. Where a trustee is incapable of acting. Incapacity refers to some physical or mental inability to administer the trust adequately, but does not include bankruptcy (see Re Wheeler and De Rochow (1896)). Under s 36(3), a corporation becomes incapable of acting on the date of the dissolution.

7. Where the trustee is an infant, i.e. a person under the age of 18. Such a person may become a trustee under an implied trust (resulting or constructive). An infant is incapable of becoming an express trustee.

Section 36(1) lists, in chronological order, the persons who are entitled to exercise the statutory power of appointing replacement trustees. These are:

■ The person or persons nominated in the trust instrument for the purpose of appointing new trustees (see the discussion earlier).

A trustee who is legitimately removed as a trustee is not a ‘continuing’ or ‘refusing’ or ‘retiring’ trustee for the purposes of s 36(8). He is a removed trustee. This was decided in Re Stoneham’s Settlement Trust [1953] Ch 59.

Section 36(4) provides that the personal representative of the last surviving or continuing trustee includes those who have proved the will of the testator or the administrator of a person dying intestate.

Section 36(5) provides that a sole or last surviving executor intending to renounce probate shall have the power of appointment of trustees at any time before renouncing probate.

Section 36(6) authorises the appointment of additional trustees although no trustee needs to be replaced:


The subsection is self-explanatory but it may be observed that a trust corporation (corporate professional trustee, such as a bank or an insurance company) has the power of two or more individual trustees. No power exists under s 36(6) to increase the number of trustees beyond four.

Direction of the beneficiaries

Sections 19–21 of the Trusts of Land and Appointment of Trustees Act 1996 (TOLATA 1996) invested new powers in the beneficiaries to direct a retirement of trustees and/or appointment of trustees. These provisions relate to trusts of all types of property (whether land or personalty). But the provisions may be excluded in whole or in part by the trust.

Section 19 of TOLATA 1996 applies where there is no person nominated under the trust instrument to appoint new trustees, and all the beneficiaries are of full age and capacity and collectively are absolutely entitled to the trust property. The beneficiaries have either one or both of the following rights. A right to direct in writing that one or more of the trustees shall retire from the trust, and/or that a named person or persons be appointed, in writing, as new trustee or trustees. The direction may be by way of substitution for a trustee or trustees directed to retire or as an additional trustee or trustees.

‘The mechanics of the appointment, retirement and removal of trustees are of practical significance and integral for express trusts.’