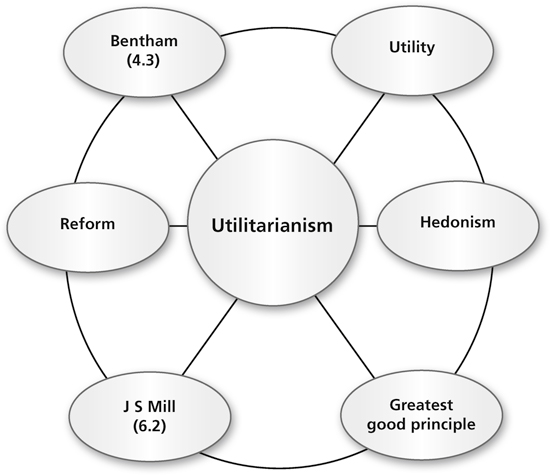 1.  As noted in section 4.3, Bentham played a vital role in legal positivism, but he is also crucial in considering utilitarianism.

2.  He was a qualified attorney (solicitor), although he never practised but preferred to work and write as a polemicist (a person who engages in public controversies), his major theoretical work being the Introduction to the Principles of Morals and Legislation (1789).

3.  He was influenced by French Enlightenment philosophes and by Hume (from whom he developed the utility principle) and Locke (e.g. Enquiry Concerning Human Understanding (1748)), so much of his work combines continental rationalist with British empiricist modes of thought (see chapter 3).

4.  He was one of a group of intellectuals that included John Stuart Mill and Herbert Spencer who were characterised as ‘philosophical radicals’ and who had a common objective of wanting to remove anomalies such as the:

(b)  control of the economy by the aristocracy and other privileged groups (also prior to 19th-century economic reforms).

5.  In adopting such attitudes they found themselves:

(a)  opposed to much previous and by then outdated legal philosophical tradition, such as was represented by Blackstone

(b)  in favour of various aspects of reform, such as a wider franchise (right to vote) and more representative government.

6.  Bentham and other utilitarians argued that scientific explanation of legislation and morals is possible if it is done in the context of human behaviour, the rationale behind this being in crude terms hedonistic, meaning:

(a)  enjoyment of pleasure

(b)  fear of pain or punishment

7.  Both can be measured by objective criteria with regard to their constitutive elements, although they themselves might be subjective or objective, such as:

8.  He also believed that people’s standards of right and wrong were related to such contradistinctions and qualities.

9.  It is possible to identify three principles or characteristics that make up the main bases of Bentham’s philosophy:

(a)  utility, or the greatest happiness principle, by which he meant that which promotes pleasure, rather than usefulness