Trespass to the person 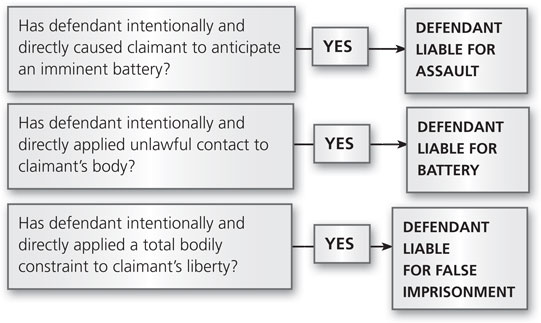 Trespass to the Person 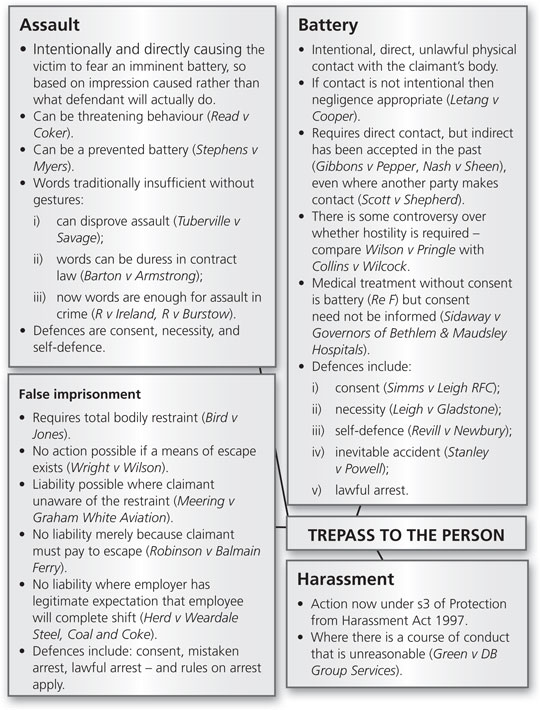 1.  The old view was that assault was an incomplete battery.

2.  Modern definition is intentionally and directly causing a person to fear being victim of an imminent battery (Letang v Cooper (1965)).

1.  Assault is free-standing, so intention refers to the impression it will produce in claimant, not as to what defendant intends to do. Compare R v St. George (1840) with Blake v Barnard (1840).

5.  An attempt to commit a battery which is thwarted is still an assault (Stephens v Myers (1830)).

6.  Traditionally words alone were not an assault:

but could disprove an assault (Tuberville v Savage (1669));

and a threat on its own can be assault (Read v Coker);

and in contract law, words can amount to duress if the threat is sufficiently serious (Barton v Armstrong (1969));

more recently, in crime, words alone and even silence have been accepted as assault (R v Ireland; R v Burstow (1998)).

7.  The claimant must be fearful of an impending battery. Compare Smith v Superintendent of Woking (1983) with R v Martin (1881).

There are a number of possible definitions:

the defendant intentionally and directly applies unlawful force to claimant’s body – but force is irrelevant in, for example, medicine;

the defendant, intending the result, does an act which directly and physically affects the claimant, but still implies damage;

has been said to include the ‘ordinary collisions of life’, but this is very unlikely (Wilson v Pringle (1987)).

1.  Intention is a fairly recent requirement – without it an action should be brought in negligence (Fowler v Lanning (1959)).

but now between intention and negligence (Letang v Cooper (1965));

and even where other parties have actually caused the harm (Scott v Shepherd (1773)).

4.  Hostility is a recent requirement, with traditional foundations:

Lord Holt CJ in Cole v Turner (1704) suggested that ‘the least touching of another in anger is a battery …’;

but conflicting with Lord Goff’s test in Collins v Wilcock (1987) of whether the contact is acceptable in the conduct of daily life.

5.  Medical treatment without consent has always been battery: