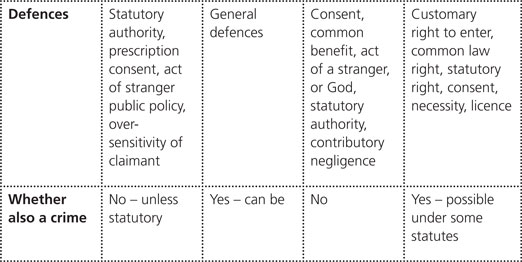 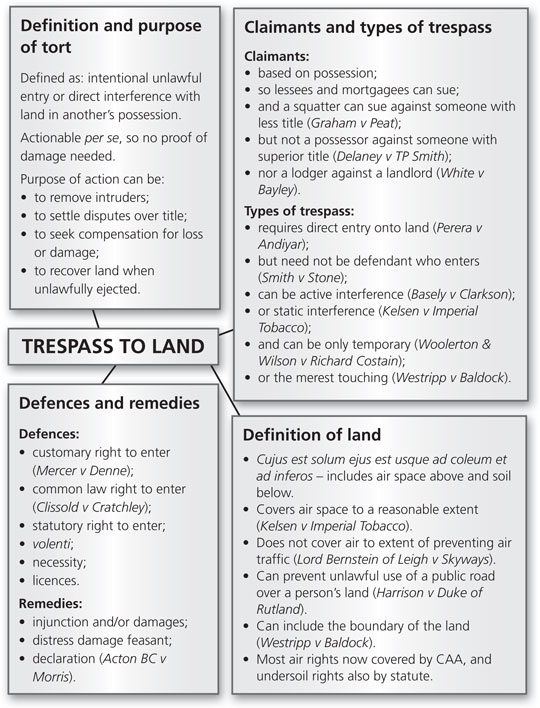 6.1 The Origins and Character of Trespass

1.  Trespass is as old as the common law itself.

2.  It was necessary so claimants could bring their own action where the distinction between civil and criminal law was unclear.

3.  Derives from the Latin: trans (through) and passus (a pace).

4.  It is most accurately used in conjunction with land.

5.  But there are torts of trespass to the person and to goods also.

6.  It is used generally to refer to an interference.

7.  It is actionable per se (so without proof of damage).

8.  Originally it was only actionable if it arose directly as a consequence of the defendant’s direct and positive act.

9.  Indirect interference or omission would be an action on the case (forerunner of negligence) when damage had to be shown.

6.2.1 Definition, Character and Purpose of the Tort

1.  Developed from the writ quare clausum fregit by way of the taking of an enclosed area.

2.  Defined as the intentional or negligent, unlawful entry upon or direct interference with the land in another’s possession.

3.  The tort is actionable per se, so no proof of damage needed.

4.  Damages are payable if there is any loss.

5.  It can be intentional, but also by a person who enters lawfully, but then carries out an unlawful act.

6.  There may be many purposes of suing:

to settle disputes over title;

to seek compensation for loss or damage;

to recover land from which claimant was unlawfully ejected.

7.  The action can be by a possessor rather than an owner.

1.  If the tort were based only on title a tenant could not claim. If it was based on pure possession then an owner might not claim.

2.  So, an action is in favour of the person in possession at the time the trespass is committed, as against the wrongdoer.

3.  So ‘possession is title as against a wrongdoer…’.