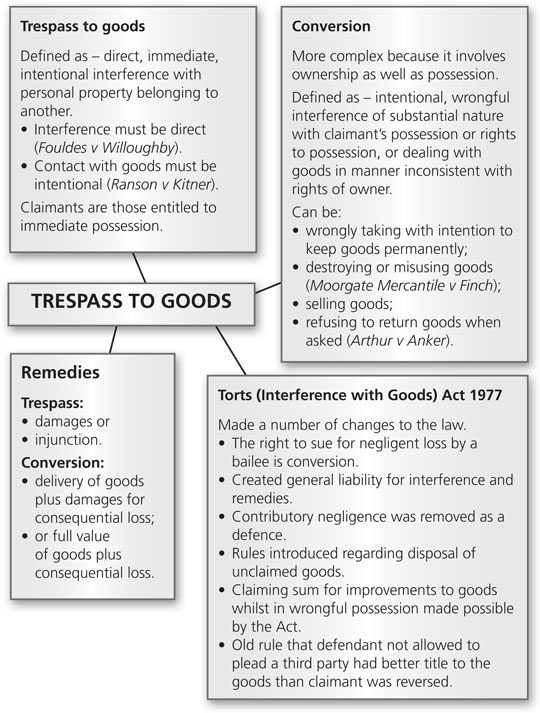 1.  Trespass, meaning interference, is one of the oldest areas of tort.

2.  Trespass to goods developed alongside trespass to land and to the person, and was similar but protected personal property.

3.  Medieval law became outdated and in need of reform, so updated and clarified in Torts (Interference with Goods) Act 1977, but not entirely, so some common law still remains, adding confusion.

1.  One of the original two torts to do with goods.

2.  Defined as ‘direct, immediate interference with personal property belonging to another person …’.

3.  Claimants are those entitled to immediate possession.

5.  The interference must be intentional in the sense that contact with the goods is intentional (Ranson v Kitner (1888)).

6.  Traditionally actionable per se (without proof of damage), but this probably does not survive (Letang v Cooper (1965)).

7.  Under s11(1) Torts (Interference with Goods) Act 1977 the defence of contributory negligence is not available.

8.  Wheel clamping can be a trespass unless the claimant voluntarily undertook the risk of the clamping (Vine v Waltham Forest London Borough Council (2000)), where the claimant had not seen warning signs and did not appreciate the consequences of trespassing.

1.  Trespass to goods is a fairly simple tort; conversion is complex.

a)   This is because it involves ownership as well as possession.

b)   As it takes many forms it is often said to defy easy definition.

2.  Broadly defined as ‘intentional, wrongful interference of a substantial nature with the claimant’s possession or right to possession of the goods or ‘dealing with goods in a manner inconsistent with the true owner’s rights …’. So it might occur even where the defendant has no knowledge that the goods belong to the claimant (Lewis v Avery (1972)).

3.  There are a number of examples of conversion:

wrongfully taking the goods with the intention of keeping them permanently, or at least for some time;

selling the goods or assisting in their disposition;

refusing to return the goods once their return has been demanded (Arthur v Anker (1996)) (wheel clamping).

4.  Conversion does not cover intangible rights unless those rights are sufficiently connected with a chattel (OGB v Allan Ltd (2007)).

5.  After the Act a verbal statement denying the claimant’s title is not conversion.

6.  Again the Act removes contributory negligence as a defence.

2.  In all three torts there was no remedy for a claimant who did not have possession or an immediate right to possession of the goods.

3.  So common law developed an action on the case (as in land) to challenge interference with the claimant’s reversionary interest in the goods.

1.  The Act tried to remove overlaps and ambiguities with common law.

2.  It did make a number of changes to the law:

the right to sue for negligent loss by a bailee is conversion;

contributory negligence was removed as a defence;

rules were introduced regarding disposal of unclaimed goods;

claiming a sum for improvements made to the goods whilst in wrongful possession was made possible by the Act;

the old rule that the defendant was not allowed to plead that a third party had better title to the goods than the claimant was reversed.

1.  In trespass to goods the claimant may recover damages or an injunction.

2.  Conversion has been modified by the Act with two possibilities:

delivery of the goods, plus damages for consequential loss;

if this is not possible or appropriate then the claimant can have the full value of the goods, plus damages for any consequential loss.

1.  Product liability is only one aspect of consumer protection.

2.  Its origins are in contract law:

b)   effective consumer protection began with the Sale of Goods Act 1893, which implied terms as to quality of the goods into contracts.

3.  Otherwise only limited opportunities existed to sue in tort in respect of dangerous goods.

4.  Suing in contract had obvious shortcomings:

remedies were only available to the parties to the contract;