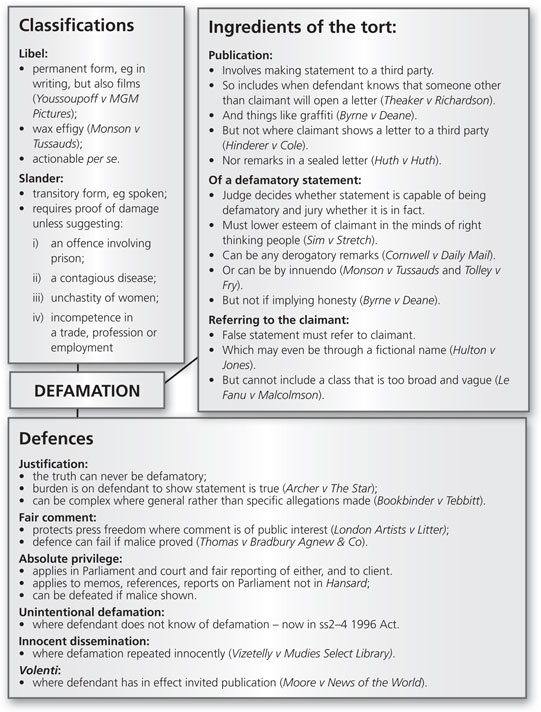 9.1.1 The Categories of Defamation

2.  As such it can be made in a number of ways, but there are two specific categories: libel and slander.

3.  The general distinction is between ‘permanent’ and ‘transitory’:

libel has been called a written form and slander a spoken form;

this view is no longer adequate because of modern technology;

the difference owes more to origins than real justification;

it has been discarded by most commonwealth jurisdictions;

this was recommended in the UK by the Faulkes Report;

but the Defamation Act 1996 did not address this issue.

4.  The two categories do have two important distinctions:

b)   Libel is actionable per se; for slander damage must be shown, except in four circumstances:

imputation of an offence involving imprisonment;

imputation of a contagious disease;

imputation of unfitness or incompetence in a trade, profession, office or calling (and now by Defamation Act 1952 for any employment provided claimant could be harmed as a result).

5.  The difference between permanent and transitory is not always obvious, but there are acknowledged situations:

a written defamation is obviously libel;

radio and television broadcasts are libel under the Defamation Act 1952 and the Broadcasting Act 1990;

by the Theatres Act 1968 s4 a defamation in a public performance of a play is also libel;

a red light hung outside a woman’s house could be libel;

the spoken word in general is slander;

gestures in general are slander;

tapes are probably slander because they can be wiped;

but other recordings, such as CD and vinyl, whether made in studios or from live performance, are less easy to categorize.

9.1.2 The Definition and Ingredients of the Tort

1.  Defined as ‘the publishing of a defamatory statement which refers to the claimant and which has no lawful justification …’.

2.  Each separate element of the tort must be proved.

1.  This involves communicating the statement to a third party.

2.  Each repeat is a fresh publication and therefore actionable, so there can be many defendants to a defamation action.

a postcard (as it is assumed it will be seen by a third party);

every sale of a newspaper;

every lending of a book from a library;

a letter addressed to the wrong person;

a letter the defendant knows someone besides the claimant might open (Pullman v Hill (1891) and Theaker v Richardson (1962));

making a remark so that it is overheard;

the defendant can also be liable for the consequences of a defamatory statement that (s)he knows will be repeated (Slipper v BBC (1991));

it is uncertain whether repeating the remark through internal mail amounts to fresh publications.

4.  In the following there is generally no publication:

a statement made only to the claimant who then shows it to a third party (Hinderer v Cole (1977));

communication between spouses only;

a letter addressed only to the claimant;

2.  The judge directs the jury on the meaning of defamation.

If the judge concludes that no reasonable man could find the words defamatory (s)he withdraws the case from the jury (Capital & Counties Bank Ltd v Henty (1882)).

If the meaning can only be defamatory the jury is so directed.

3.  If more than one defamatory meaning is alleged the judge rules which words are capable of being defamatory and which to put before the jury (Lewis v Daily Telegraph (1964)).

In Mapp v Newsgroup Newspapers Ltd (1997) CA held that the judge should evaluate the words to delimit the possible range of meanings.

By s7 Defamation Act 1996 either party can ask before trial if words are capable of bearing a particular meaning.

4.  The jury then decides whether the words in fact are defamatory: ‘a statement which tends to lower the plaintiff in the minds of right-thinking members of society generally, and in particular to cause him to be regarded with feelings of hatred, contempt, ridicule, fear and disesteem …’ (Lord Atkin in Sim v Stretch (1935)).

5.  So defamatory remarks depend entirely on context and include:

6.  Implying honesty is not defamatory (Byrne v Deane (1937)); nor are statements that lead to sympathy rather than scorn (Grappelli v Derek Block Holdings Ltd (1981)).

7.  ‘Innuendo’ can also be defamation:

so, words can defame because of their juxtaposition with other things (Monson v Tussauds (1894) and Cosmos v BBC (1976));

although a complaint of such a meaning can bring other evidence into court (Allsopp v Church of England Newspaper Ltd (1972)).

Referring to the Claimant

1.  The claimant must show that the statement referred to him/her:

this is easy if (s)he is named:

it is sufficient if claimant can show people might think it refers to him/her;

or with cartoons (Tolley).