The Economics of Motorways of the Sea: Re-defining Maritime Transport Infrastructure 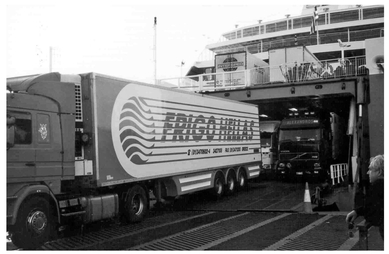 The Economics of Motorways of the Sea: Re-Defining Maritime Transport Infrastructure

Ships and ports are considered also in the context of modal shift; that is, transferring freight from road to sea, or the so-called “Motorways of the Sea” (MoS). Reviewing MoS policy and developments in the context of comparable road and rail infrastructure allows for new insights about the reality of maritime transport infrastructure.

This chapter briefly considers the general policy approach to developing MoS in Europe and the influence this has had in helping to re-appraise our understanding of maritime transport relative to land transport modes. This is followed with an analysis of modal shift MoS examples, emphasising some of the challenges faced, which tend to relate to market realities determined by policy approaches and influenced by traditional definitions of transport infrastructure. Thereafter the discussion centres on developing, explaining and justifying the need to re-define our understanding of the term maritime transport infrastructure.

In Europe, governments at EU and Member State levels are now working to facilitate MoS services leading to large-scale modal shift. According to the European Commission, the sea represents the only real solution to tackle road freight traffic growth in Europe, hence the inclusion of MoS projects in the Trans-European Transport Network (TEN-T) (Commission of the European Communities, 2004). Whilst such motives are indeed honourable, the appreciation of what exactly constitutes seaway infrastructure still requires careful consideration, more especially in view of economic distortions resulting from ongoing public financing of land transport infrastructure generally.

The TEN-T of MoS is intended to recreate the road and rail network on the water, by concentrating flows of freight in viable, regular searoutes. TEN-T MoS project sare expected to improve port facilities and infrastructure, as well as electronic logistics management systems, safety and security and administrative and customs procedures, as well as access routes for year-round navigability. The policy and funding emphasis, therefore, is largely aimed at ports and transport access to ports.

The EU Van Miert High-Level Group, during its deliberations on extending Europe’s TEN-T network, nevertheless decided that MoS were “Floating Infrastructure” (Commission of the European Communities, 2004). This corresponded with ideas put forward by GIE (2007), albeit the latter went further by highlighting the need for public financing of the “boat infrastructure” in the specific context of integrating waterborne transport into the Trans-European Networks. Clearly there is a recognition here that the ‘boat’ needs to be taken into account.

Such views were supported through the findings of the SUTRANET project funded by the EU Interreg IIIB North Sea Programme (SUTRANET, 2007). Both GIE and SUTRANET findings consider the role of the port as being that of (merely) a transport node, and certainly not a seaway or MoS. In this regard, defining a seaport as maritime transport infrastructure seems to be totally insufficient.

EU funding is aimed at counteracting ongoing transport market distortions favouring land transport modes, and Member States themselves are also requested to do more in this area. The various EU TEN-T MoS initiatives are intended to facilitate new developments through current limited financial intervention. Some success is also occurring with the EU Marco Polo Programme which aims to support MoS service start-ups, albeit over a limited period of three–four years. However, the bulk of investment in MoS projects is expected to be provided by private transport operators.

At the same time, public funding of roadway and railway infrastructure is set to continue at high levels for the foreseeable future, which will lead to ongoing challenges for MoS start-ups. The key question here is – why should there be limited short-term support for maritime transport when large-scale public sector funding for roadway and railway infrastructure continues?

EU Member States have been requested to co-finance MoS initiatives themselves as well and under the new EU TEN-T MoS policy this is now allowable. In addition to international services between states, MoS services could also comprise domestic/coastal routes within states. Where road transport does not pay its full cost of using road infrastructure (as in the UK) then the need for MoS support is found to be greater (UK Marine Motorways Study, 2002).

In Italy, the EcoBonus MoS incentive scheme is perhaps the most advanced modal shift initiative so far within the EU. This provides for state support of €240 million over three years towards MoS services, with some 30 MoS routes qualifying, and allowing for a 20–30% fare rebate to truckers to help equalise costs with road transport.

Another MoS scheme for routes between France and Spain has been implemented rather differently. In this instance a tender process was developed for an Atlantic Spain–France MoS service, based on an agreement between both countries, and supervised by the EC. In this MoS scheme the ports have been selected by bidders themselves, not by the state. Subsidy is considered as start-up aid to support operations (over three or five years) with the criteria of evaluation for bids being:

Clearly, the development of MoS initiatives in Europe is still at an early stage. The EC and Member States are also at a formative stage of really understanding what MoS is, and how it fits into the wider transport policy context. Implementation of different MoS funding schemes by individual Member States results in non-standardisation and could lead to confusion amongst service providers. Conversely, those States not implementing any MoS scheme at all may be unlikely to gain the modal shift benefits from the start-up of MoS services.

This implies that there needs to be a better understanding of what is meant by the term “maritime transport infrastructure”, or MoS, as well as a shift towards some standardisation on attractive and easy to use/implement MoS funding methods and incentives which take full account of subsidies applying to alternative land transport modes.

3. Modal Shift and Motorways of the Sea (Mos)

New MoS modal shift transport services have developed in a number of countries over recent years. Italy has been at the forefront of European MoS developments over the last 15 years or so. MoS in the modern sense arguably began when state-owned Finmare introduced the innovative Viamare service in 1991. That service employed five three-deck Ro-Ro ships each capable of carrying well over 100 trailers plus 50 drivers, to provide a daily link between two dedicated out-of-town terminals at Voltri (Genoa) and Termini Imerese (near Palermo). While the Viamare “Autostrade del Mare” experiment was not without its difficulties (Baird, 1997), the initiative demonstrated for the first time in Europe what could be achieved in terms of road-to-sea modal shift on a large scale.

Since then ship design and efficiency has continued to improve and today the right ships are available now to do the job of modal shift very effectively. Existing Ro-Ro and Ro-Pax (i.e. freight plus limited passenger capacity) vessels offer fast speed (22 knots or more), coupled with high payload, and high reliability (Figure 1). Although ships of 2,000 lane metres (i.e.