THE CONTEMPORARY ROLE AND POSSIBLE REFORM OF PARLIAMENT

The contemporary role and possible reform of Parliament 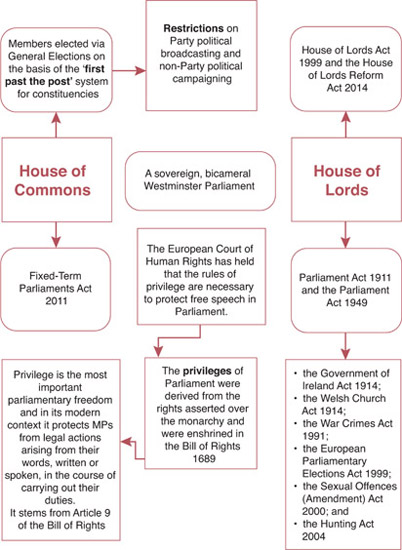 9.1.1 Parliament is the main legislative body in the UK’s constitution. It is a bicameral body, meaning that it is comprised of two chambers, the House of Commons and the House of Lords.

9.1.2 The main functions of Parliament are:

9.1.3 Perhaps the most significant of these roles is to secure executive accountability and Parliament attempts to do this using a range of methods.

9.1.4 Parliament’s ability to hold the executive accountable is weakened by the fact that the executive has become dominant. The primary reason for this is the strong Party system that has developed since the early 20th century. The first past the post electoral system supports the creation of a strong, two-Party system and makes it difficult for smaller Parties to win seats.

9.1.5 The ability of Parliament to hold the executive accountable can be impacted on by the Party system in the following ways:

9.1.6 The United Kingdom is divided into 659 constituencies, each represented by one Member of Parliament (MP). Each constituency should be approximately the same in terms of voter numbers and distribution and the boundaries should respect local government boundaries. However, in practice there can be considerable differences between constituencies in terms of both geographical size and voting population.

9.2 The electoral system relevant to the ‘Westminster Parliament’

9.2.1 The principle of universal adult suffrage was not fully realised in the United Kingdom until the 1920s, and is based upon one equal vote per voter. The rules for eligibility of voters are contained in the Representation of the People Act 1983. A voter must be an adult, a citizen of the United Kingdom (or an EU citizen for local elections), and registered on the electoral roll of a local authority.

9.2.2 The following are disqualified from voting:

9.2.3 Eligibility for standing as a candidate in a parliamentary General Election is governed by the House of Commons Disqualification Act 1975. The following categories are disqualified:

9.2.4 There are also restrictions upon individual eligibility to stand as a candidate in a General Election:

9.2.5 The voting system in the United Kingdom was traditionally a simple majority system known as ‘first past the post’ or ‘plurality’ system. In such a system a winning candidate need achieve only one more vote than the next candidate in a constituency in order to take a seat as a Member of Parliament (MP).

9.2.6 Criticisms of the first past the post system include the fact that it is defective in securing democratic representation since it ignores all votes except for the winning candidate. Hence the smaller political parties and minorities often have little or no representation. For example:


In 2010 the General Election results were as follows:


9.2.9 It is notable that in ‘Loyal Opposition’ to the Conservative majority Government elected in May 2015, as well as 232 Labour MPs, there sits a group of 56 Scottish Nationalist Party (SNP) MPs, who between them received only 4.7% of the votes cast in the United Kingdom as a whole, but occupy 8.6% of the seats.

9.2.10 Contrast this with the United Kingdom Independence Party (UKIP), whose 12.6% share of the national voting won them a single seat in the Commons.

9.2.11 Outright ‘proportional representation’, with a share of the vote transferred to a straightforward share of 650 seats in the Commons, as opposed to the ‘first past the post’ system currently used, would have secured UKIP more than 50 seats.

At this point we can now address other electoral system formats used in the United Kingdom today.

9.3 Other electoral systems used in the United Kingdom

9.3.1 Recent changes have introduced forms of proportional representation to elect certain representatives and moved the United Kingdom to a position where there is a ‘mixed’ electoral system (see table below). The first past the post system is, however, still currently used to elect Members of Parliament.


9.3.2 The major political parties considered reform of the electoral system as part of their manifestos for the 2010 General Election with:

9.3.3 The Conservative-Liberal Democrat Coalition Agreement 2010 led to a national referendum in 2011 on the introduction of the Alternative Vote system of electing Members of Parliament to the House of Commons, which was rejected.

9.4 The Electoral Commission and controls on lobbying and campaigning

9.4.1 The Electoral Commission is an independent body that monitors and regulates elections of different kinds, including General Elections, across the United Kingdom.

9.4.3 The Electoral Commission itself also produces basic guides to electoral processes each time a significant election approaches, and the legal position in this section of this chapter is also based on this material, and is accurate at the time of writing in May 2015. See www.electoralcommission.org.uk/ for further details and updates.

9.4.4 The Political Parties, Elections and Referendums Act 2000 (PPERA 2000) introduced new controls on Party spending and campaign funding and established the Electoral Commission with wide responsibilities for the conduct of elections (discussed below). The Act also regulates the activities of a range of participants.

9.4.5 The Electoral Commission was established under the PPERA 2000 as a new independent body charged with responsibility for all aspects of elections, local and general or regional, in the United Kingdom. The body as a whole is accountable to Parliament.

9.4.6 The Electoral Commission’s duties include:

9.4.7 The Commission deals with issues relating to the transparency of political campaigns and parties, for example:

9.4.8 One important role is to regulate the funding of political parties. The PPERA 2000 defines permissible and impermissible donors and requires the disclosure and recording by the Commission of donations. Anonymous or unidentifiable donations are impermissible.

9.4.10 The Political Parties and Elections Act 2009 granted the Commission a variety of additional supervisory and investigatory powers; increased the transparency of donations to political Parties; and proposed a range of new civil sanctions that may be imposed on donees and political Parties.

9.4.11 The Electoral Commission is also responsible for monitoring compliance with the Transparency of Lobbying, Non Party Campaigning and Trade Union Administration Act 2014 (‘the Lobbying Act’), which affected the responsibilities of ‘non-party campaigners’.

9.4.12 The Lobbying Act requires, controversially, that non-Party campaigning groups, such as charities and trade unions, must register with the Electoral Commission if they expect to spend £20,000 or more in the run-up to a General Election in support of one or more political Parties. At a more national level, campaign spending for a non-Party campaigning group is then limited to:

9.4.13 Perhaps most importantly, non-Party campaigning groups can only spend a maximum of £9,750 per constituency in the build-up to an election – greatly limiting their ability to advocate in favour of a particular candidate in crucial constituencies for a particular political Party.

9.4.14 This new regulation of non-Party campaigning groups was introduced to increase transparency in the way that financial support is indirectly marshalled behind particular political Parties.

9.4.15 The Commission continues to review the future development of electoral systems and regulations and produces consultation documents on new ideas such as the expansion of electronic voting systems. In particular, the impact of the new Lobbying Act will be reviewed by Government in an inquiry led by Lord Hodgson, beginning in 2015. (Critics of the Lobbying Act 2014 have called the legislation the ‘Gagging Act’ because of the way that it limited spending on political awareness-raising by non-Party campaigning organisations, such as trade unions, which naturally support the Labour Party, in the run-up to the General Election 2015.)