The best hope of mankind? A brief history of the UN 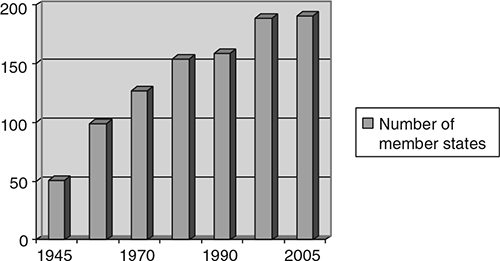 The best hope of mankind? A brief history of the UN

We usually think of international organizations as a twentieth-century phenomenon that started with the establishment of the League of Nations in 1919. This is, for the most part, true. However, in the late nineteenth century nations had already established international organizations for dealing with specific issues. The foremost among them were the International Telecommunication Union (ITU), founded in 1865 (originally called the International Telegraph Union), and the Universal Postal Union, which dates back to 1874. Today, both of these organizations are part of the UN system. The International Peace Conference held in The Hague in 1899 established the Permanent Court of Arbitration, which started its work in 1902. It was the first medium for settling international disputes between countries and a predecessor of the UN’s International Court of Justice. The outbreak of World War I in August 1914 and the carnage that followed, however, showed the limits of this mechanism. It also signaled the final end of an international system—the so-called Concert of Europe—that had saved the old Continent from the scourge of a major war since Napoleon’s adventures a century earlier.

Between 1914 and 1918, Europe saw the worst killing spree of its already bloody history. Almost twenty million people perished. Empires (the Ottoman, the Austro-Hungarian, and, temporarily, the Russian) collapsed. New nations (such as Czechoslovakia, Estonia, and Finland) were born. Radical revolutions were won (in Russia) and lost (in Germany). In short, a new world order emerged.

The League of Nations: “a definite guaranty of peace”

The president was not alone in placing such high hopes in the new organization. Wilson, with his open idealism and fresh internationalism, offered a ray of hope for a better future. But in retrospect, Wilson’s confident rhetoric appears out of place. The new League was dealt a devastating blow when the U.S. Senate refused to ratify the Versailles Treaty. The country never joined the League, making the newly formed organization permanently handicapped. 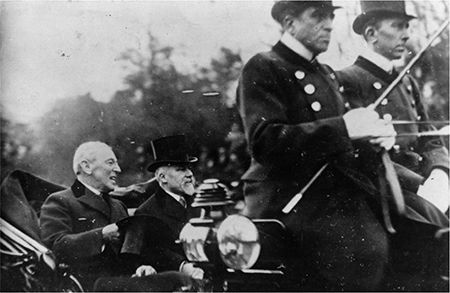 2. President Woodrow Wilson rides with French premier Georges Clemenceau to the signing of the Treaty of Versailles.

Nevertheless, after being housed temporarily in London, the League commenced its operations in Geneva, Switzerland, in 1920. It soon scored some limited successes. In the early 1920s, the League settled territorial disputes between Finland and Sweden over the Aland Islands, between Germany and Poland over Upper Silesia, and between Iraq and Turkey over the city of Mosul. The League combated the international opium trade and alleviated refugee crises in Russia with some success. By acting as the umbrella organization for such agencies as the International Labor Organization (ILO) and the Permanent Court of International Justice (predecessor of today’s International Court of Justice, ICJ), it also provided a model for the future United Nations.

A victors’ organization, the League was dominated by France and Great Britain, with Japan and Italy as the other two permanent members of the League Council (the rough equivalent to the UN Security Council and the highest authority on matters of international security). The twenty-eight founding members, represented in the General Assembly, were mostly from Europe and Latin America.

Indeed, the League of Nations was in this sense an expression of the Eurocentric world of its times: virtually all of Africa, Asia, and the Middle East were controlled by European imperial powers. To be sure, the League established the so-called mandate system to prepare the “natives” of some territories previously ruled by the German and Ottoman empires for self-government and independence. The governments that received the mandates—for example, Britain in Palestine and France in Lebanon and Syria—were granted broad authority regarding such preparations. They took their time. Independence for most European mandates would have to wait until after 1945 and would be accompanied by much violence, instability, and, in the long run, chronic insecurity.

Shortsighted though they were, the mandates were a time bomb that would explode only after the League had ceased to exist. It was the League’s failure to prevent the outbreak of World War II that caused its demise.

The world at war

Although the absence of the United States was a significant factor in rendering the League of Nations ineffectual, the organization’s importance was further minimized by the lack of respect it commanded among other great powers. Germany and the Soviet Union were members, but only briefly: Germany joined in 1926, only to exit the League after the Nazis came to power in 1933. In 1933 the Soviet Union entered the League. Six years later, after its attack on Finland in late 1939, the USSR became the only League member ever to be expelled.

By that point the League had also seen the departure of two of its founding members. Unhappy with the League’s criticism of its occupation of Manchuria, Japan left the club in 1933. In 1935–36 Italy was equally dismissive of its membership obligations after its successful attack and occupation of Ethiopia, one of the three African members of the League (the others were Liberia and South Africa).

Why did the League fail in countering this series of aggressive acts by a number of great powers willing to use military force for expansionist purposes? The global economic crisis of the 1930s certainly curbed the enthusiasm of others—France and Britain in particular—to risk lives and resources to fight distant wars that did not have an immediate bearing on their national security. Thus, they turned to appeasement, a policy that ultimately failed. During the 1938 Munich Conference, Britain and France acquiesced in the dismantlement of Czechoslovakia by agreeing to the addition of the Sudetenland to Hitler’s Reich. If that act had been justified by the existence of a large German-speaking population in the ceded parts of Czechoslovakia, there might have been no excuse for Germany’s later occupation of the remainder of Czechoslovakia. When Germany finally attacked Poland in September 1939, after concluding a sinister pact with the Soviet Union a month earlier, the high hopes placed upon the League only two decades earlier were completely crushed.

The League of Nations was further handicapped by its inability to apply sufficient pressure in clear-cut cases of aggression. According to its covenant, the League could introduce verbal or economic sanctions against an aggressor and, if these methods failed, intervene militarily. In theory these steps were logical and reasonable. But while verbal sanctions could not deter an aggressor that was determined and strong, economic sanctions required international collaboration. As the League had no authority beyond its limited membership, a country suffering from the pressure of economic sanctions could still trade with nonmembers. Especially during the international economic crisis of the 1930s, willing trading partners were not hard to find. Because the League had no army of its own, military intervention required member countries to furnish the necessary troops. In practice this meant French or British troops, but neither country was interested in getting involved in potentially costly conflicts in Africa or Asia.

By the time the League expelled the Soviet Union in 1939, there was no getting around the fact that it had failed in its overall objective. The League had not become, as Wilson had hoped, a “definite guaranty for peace.” Nevertheless, the onset of World War II made it even more evident that some form of international organization was needed to safeguard against yet another descent to Armageddon in the future. One goal was paramount: a repetition of the League experience could not be allowed.

An act of creation

The first “Declaration by United Nations” dates back to January 1, 1942, when representatives of twenty-six nations pledged their governments to continue fighting together to defeat the Axis powers and to obtain a “just” peace. Thus, unlike the League, the UN started off as an alliance that came into being soon after the American entry to the war, following the Japanese attack on Pearl Harbor and Germany’s declaration of war on the United States in December 1941. World War II became a truly global conflict, pitting the so-called Grand Alliance (headed by the United States, Great Britain, and the Soviet Union) against the Axis powers (Germany, Italy, and Japan).

World War II was, simply, deadly. The estimated civilian and military death tolls ran as high as 72 million. The deeper impact of the war on global and national economies, as well as on political structures around the globe, was profound. European empires collapsed either during or as a result of the war. The United States and the Soviet Union emerged as the strongest nations on earth. Germany and Japan were occupied and militarily emasculated. In sum, the world was transformed.

The UN was created, in part, to manage that transformation. As in the case of the League, it was an initiative of the American president, this time Franklin D. Roosevelt, whose administration pushed for the creation of the UN during the last years of the war. In August 1944 delegates from China, the Soviet Union, the United Kingdom, and the United States met at Dumbarton Oaks, a private estate in Washington, D.C., to draw up the basic blueprint for the new international organization. By October the outline for the UN Charter was ready. After the surrender of Germany in April of the following year (and the death of Roosevelt in the same month), the charter was signed in San Francisco on June 26, 1945. On October 24, 1945, with the Pacific war also concluded, the United Nations officially came into existence. 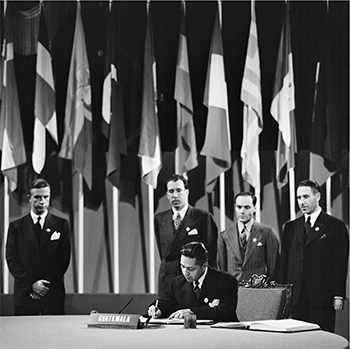 3. After months of intense negotiations, the UN Charter was officially adopted on June 25, 1945. A member of the Guatemalan delegation signs the charter at the official signing ceremony the next day.