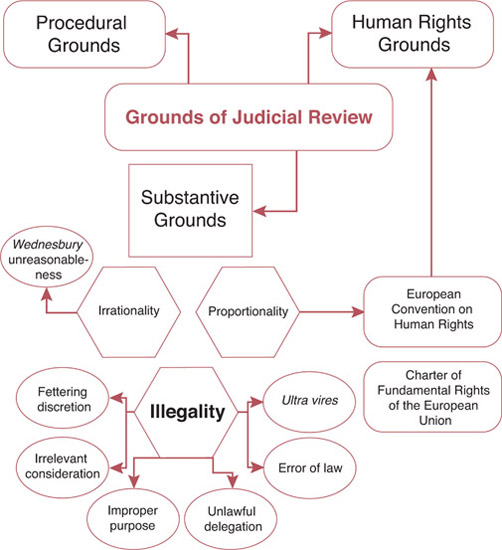 14.1 An overview of grounds for judicial review

14.1.1 It is extremely difficult to classify the grounds for judicial review since they are broad and can overlap. This was recognised by the House of Lords in Boddington v British Transport Police (1998).

14.1.2 The way this book breaks down grounds of judicial review is to take them in three particular categories:

14.1.4 ‘Human rights grounds’ are what we might call the basis of a claim for an infringement with a human right protected by an Article of the ECHR – in a sense, each protected human right, if breached, can be a distinct human rights-based ground of judicial review in that regard.

14.1.5 A useful starting point (in terms of examining how grounds of judicial review are and have been typically classified) is the classification in Council for Civil Service Unions v Minister for the Civil Service (1985) (the GCHQ Case) where Lord Diplock referred to the following three grounds (however, Lord Diplock recognised that these grounds may overlap and that others may be developed to supplement them):

14.1.6 The first two of these are different groups of substantive grounds, using the classification in this book – and accordingly are dealt with in this chapter. Procedural impropriety makes up the mainstay of the group of procedural grounds – dealt with in Chapter 15.

14.1.7 Grounds that have developed since the decision in the GCHQ Case include:

14.1.8 Figure 14A at the start of this chapter should therefore be used as a guide in identifying the grounds for judicial review, and is based on the three grounds in the GCHQ Case.

14.2 Types of illegality and the importance of statutory interpretation in deploying arguments about illegality in claiming judicial review

14.2.1 A body will act in this way when it acts outside of the powers conferred on it: in other words it lacks the necessary jurisdiction.

14.2.2 Lord Diplock in the GCHQ Case defined this as where ‘the decision maker must understand correctly the law that regulates his decision-making power and give effect to it’.

14.2.3 Examples of bodies acting in such a way include:

14.2.4 In contrast, in Akumah v Hackney London Borough Council (2005) the House of Lords held that the Council had statutory power to manage, regulate and control ‘dwelling houses’ and this should be interpreted widely to include regulation of car parking. Consequently the Council’s action to clamp cars in a car park attached to a block of flats was held intra vires.

14.2.5 Illegality as a failure to act is where a body has a statutory duty to act and fails to do so. Whether the duty to act is enforceable by the courts will depend on the wording of the statute: if the obligation to act is clear and precise the court will hold it enforceable. Conversely, if the duty is not specific the court will not hold it enforceable. If, under statute, the Secretary of State has default powers to intervene to ensure the duty to act takes place, the courts will generally not intervene: R v Secretary of State for the Environment, ex parte Norwich City Council (1982).

14.3 Illegality as an excess of powers (ultra vires)

14.3.1 The various grounds as types of illegality as considered below are concerned with the way in which bodies exercise their discretion; regardless of how wide a body’s discretion may be, the court can examine whether it has been exercised ultra vires: for example, in relation to an improper purpose: Padfield v Minister for Agriculture, Fisheries and Food (1968).

14.4 Illegality as an improper purpose

14.4.1 This is where the body uses its powers to achieve a purpose that it is not empowered to do: see Padfield v Minister for Agriculture, Fisheries and Food (1968).

14.4.2 Examples of the application of this ground include:

14.5.1 An error of law can take several forms, including incorrect interpretation, whether discretion has been properly exercised and whether irrelevant considerations have been considered or relevant ones ignored.

14.5.3 Examples of bodies acting in such a way include:

14.5.4 Errors of fact are not usually reviewable unless they are central to the decision that has been made, for example: if the decision is based on facts for which there is no evidence (Ashbridge Investments v Minister of Housing and Local Government (1965)); and where facts are proved incorrect or have been ignored or misunderstood (R v Criminal Injuries Compensation Board, ex parte A (1992)).

14.5.5 Where the decision involves a person’s individual rights, the courts are more likely to review any error of fact. For example, in R v Secretary of State for the Home Department, ex parte Khawaja (1984) the court held that whether the applicant was indeed an illegal immigrant had to be determined as fact before the power to detain or expel could be exercised.

14.6.1 In exercising its discretion a body must be seen to take into account all relevant considerations and not be swayed in its decision-making by irrelevant ones. It should be noted that this can overlap with the previous ground of improper purpose.

14.6.3 Examples of the application of this ground include: