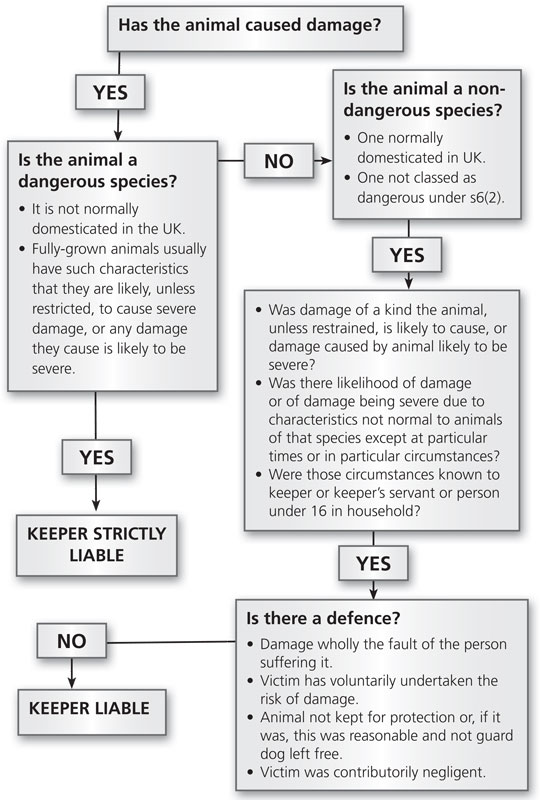 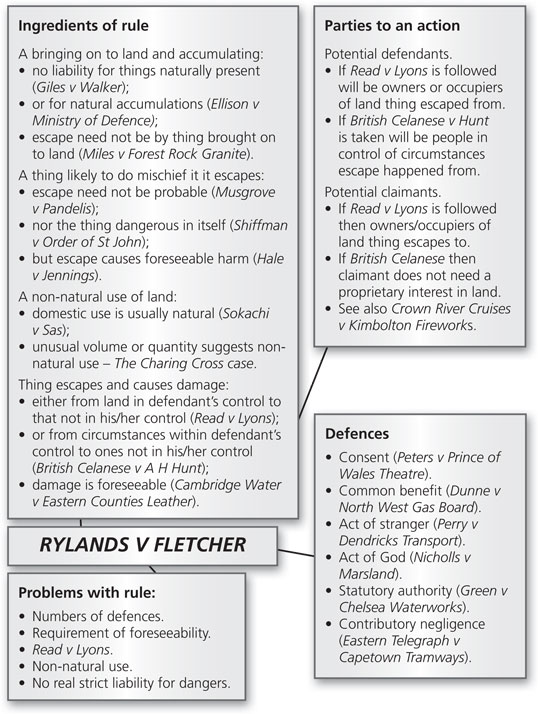 5.1 The Rule in Rylands v Fletcher

5.1.1 The Definition, Purpose, and Character of the Rule

1.  First defined by Blackburn J. In Court of Exchequer Chamber in the case: ‘the person who, for purposes of his own, brings on his land, and collects and keeps there anything likely to do mischief if it escapes, must keep it in at his peril, and, if he does not do so, he is prima facie answerable for all the damage which is the natural consequence of its escape.’

2.  Lord Cairns in HL added requirement of non-natural use of land.

3.  The tort is said to be one of strict liability, but it is possible to argue it as a type of nuisance used to cover isolated escapes.

There are many defences available, so it is strict liability only in the sense that the claimant need not prove fault.

If the use of land is natural an action will fail.

It was previously distinguished from nuisance which required foreseeability, where Rylands v Fletcher did not.

Judges have limited strict liability by restricting the use of the rule – to escapes from land only (Read v Lyons (1947)) and to ‘special use of land bringing with it increased danger to others’ (Rickards v Lothian (1913)), and see also Cambridge Water and Crown River Cruises v Kimbolton (1996).

Claimants have recovered even though not occupiers of land, so it is not a straightforward extension of nuisance.

1.  There are four key ingredients to the tort:

b)   of a thing which is likely to do mischief if it escapes;

c)   which amounts to a non-natural use of land;

A Bringing on to Land

2.  There is no liability where the thing naturally accumulates (Ellison v Ministry of Defence (1997)).

4.  The person bringing the thing on to the land need not be the owner or occupier of the land (Charing Cross Electricity Supply Co v Hydraulic Power Co (1914)) (The Charing Cross Case).

5.  The defendant must have had a purpose for bringing the thing on to the land, but it need not have been for his/her benefit. Compare Smeaton v Ilford Corporation (1954) with Dunne v North Western Gas Board (1964).

6.  The escape can be of something other than the thing brought on to the land (Miles v Forest Rock Granite Co (1917), where explosives used in blasting caused rock to escape).

A Thing Likely to do Mischief if it Escapes

3.  t must be a source of foreseeable harm if it does escape (Hale v Jennings Bros. (1938), where a ‘chairoplane’ car flew off the ride in a fairground).

A Non-Natural use of Land

1.  This was added by Lord Cairns in HL: ‘if the defendants, not stopping at the natural use of their close, had desired to use it for any purpose I may term a non-natural use … and in consequence … the water came to escape … it appears to me that which the defendants were doing they were doing at their own peril…’.

2.  It was developed and explained by Lord Moulton in Rickards v Lothian (1913): ‘not every use of land brings into play this principle. It must be some special use bringing with it increased danger to others, and not merely by the ordinary use of land or such as is proper for the general benefit of the community.’

3.  Non-natural use is a fluid concept inevitably changing with technological developments.

4.  It is ‘extraordinary’ use rather than ‘artificial’ use.

8.  Technical developments may be non-natural while at an innovative stage (Musgrove v Pandelis (1919)).

10.  If a public benefit is gained from the activity it may make it a natural use (British Celanese v AH Hunt (1969)).

11.  Things connected with war may be a natural use even in peace time (Ellison v Ministry of Defence (1997)).

12.  Some activities will be seen as a non-natural use despite being of public benefit, e.g. use of chemicals (Cambridge Water (1994)).

The Thing must Actually Escape and Cause Damage

1.  Blackburn’s original rule was not rigidly restricted to neighbouring landowners (he probably intended a general liability for dangerous activities).

2.  The rule was limited by Lord MacMillan in Read v Lyons (1947): ‘the rule derives from a conception of mutual duties of adjoining landowners …’.

4.  However, escape is also defined as ‘from a set of circumstances over which the defendant has control to a set where he does not’ by Lawton J in British Celanese v A H Hunt (1969).

1.  A defendant in an action will be either:

according to Lord Simon in Read v Lyons an owner or an occupier who satisfies the four requirements; or

according to Lawton J in British Celanese a person where the escape is from a set of circumstances under his control to one which is not.

2.  Possible claimants also vary according to the judge:

Blackburn J suggested there is no need for the claimant to have a proprietary interest.

Lord MacMillan in Read v Lyons said there is.