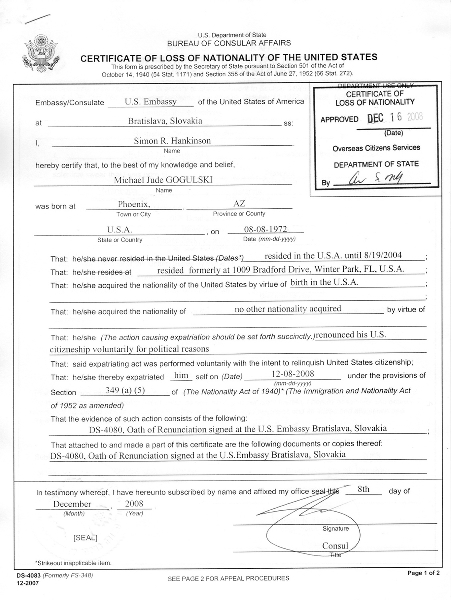 Man, it turns out, can lose all so-called Rights of Man without losing his essential quality as a man, his human dignity. Only the loss of a polity itself expels him from humanity.

—Hannah Arendt, The Origins of Totalitarianism

Why is citizenship fundamental for possessing rights? What happens when citizenship is taken away? What are the differences and similarities between the different conceptions of modern citizenship? In this chapter I will try to answer these questions by explaining the theoretical basis of the study of citizenship and its revocation. I define the concept of citizenship through exploration of the coherence debate within the study of citizenship. Then, I explain the notion of the national world system, which I argue is the reason (and justification) for the revocation of citizenship. The state measure of taking away citizenship has both practical and symbolic significance. I conclude this chapter by explaining my research design and presenting the policy of taking away American citizenship and the legal terminology that is utilized to express it. In this research, I place the revocation of citizenship into a sociological framework as well as a comparative-historical context. The scope of my study includes not only the actual implemented policy of expatriation, but also the social and symbolic meanings of such policy. This sociological framework is illuminated through the analysis of the texts of proposed and legislated laws; the views of the politicians who introduced those bills; the reactions of the United States Supreme Court; the interpretations of the State Department; and the positions of international treaties on this issue.

Citizenship is usually defined (with some variations) as “both a set of practices and a bundle of rights that define an individual’s membership in a polity.”1 Yet, defining citizenship as an analytical concept is a presumptuous task for two reasons. First, its definition is highly contested and has competing, if not contradictory, meanings and applications, ranging from the purely legal/bureaucratic to an indicator of status, a form of identity, and a set of practices. Second, this institution is constantly changing and will probably continue to change in the future. Citizenship in its various forms is contingent upon historical struggles and conflicts, and both access to it and the types of privileges and obligations it entails have been contested by various political organizations.

Given the constantly transforming nature of citizenship, I describe it by highlighting one of the important debates regarding the characteristics of citizenship. This debate involves two contradictory views. On one side of the theoretical spectrum are scholars who argue that citizenship is a constant and coherent value that describes both rights and obligations associated with belonging to a particular political entity (usually, a nation-state). The major opposing theory argues that citizenship is neither coherent nor consistent and that the rights and obligations associated with it can have opposing (and sometimes conflicting) rationales, motives, or justifications, even when proposed by the same people. Although scholars have described national citizenship in a variety of additional ways, I claim that all writings on citizenship can be categorized into one of the above-mentioned analytical classifications.

In some instances researchers are aware of this distinction between understanding citizenship as a stable concept and the perception of this status as the outcome of ongoing and everlasting political struggle, and even try to advocate for one perspective over another. For many other scholars of citizenship, this debate is only implied in their writings. Moreover, some of the scholars I mention might even reject my analytical categorization of their own theories. I hope to persuade the reader of the usefulness of this particular classification of theories, at least for the purposes of this book.

According to Brubaker, the difference between Germany and France is in their conception of citizenship. While France’s model is one of territorial inclusion and assimilative citizenship (jus soli), Germany applies a model of nationhood based on ethnic inclusion (jus sanguinis). The former gives priority to the protection of individual rights within the territory of the state, while the latter emphasizes ethnic origin as the criterion for equal citizenship or naturalization. Brubaker invokes a cultural explanation of citizenship, which attributes a volk-centered nationhood to Germany and a civic-centered citizenship to France, and argues that these differences arise from particular historical circumstances of state-building. The French nation-state and its national consciousness were gradually developed, and the notion of citizenship was crystallized within the framework of the state during the French Revolution. Conversely, the German national consciousness was for centuries divorced from any cohesive or unified organization (a German state). “The French understand their nation as the creation of their state, the Germans their nation as the basis of their state.”2 While Brubaker’s conception of citizenship and nationhood is theoretically contingent on historical circumstances, in reality it is deeply rooted in national self-perception (which is reinforced by its institutionalization in immigration policies) and thus is unlikely to change. Joppke and Roshenhek criticized the shortcomings of the implicit primordialist account in Brubaker’s position from 1992 (which he later retracted), especially “the assumption of a ‘straight line’ between reified and fixed identities and policies, which leaves out the fundamental role of conflict and contingency, that is, politics and history, as intervening variables.”3

This standpoint, which perceives nationality as a reified and fixed identity, is shared by many people in the academic community and in the general public. The broad generalization of citizenship practices and national culture can be very useful in locating overarching characteristics of large societies. The simplification of the notion of citizenship as consisting of a single and coherent value system is usually a necessity for both comprehending and explaining national trends. Accordingly, many scholars identify a nation-state with a particular coherent citizenship in both descriptive and normative terms.4 Many others argue that if a single coherent citizenship is not established, a conception of citizenship should be constructed for each specific state.5

Brubaker’s unitary approach is challenged by Rogers Smith, who claims that the various citizenship principles are neither coherent nor consistent. In other words, at any given time, citizenship is a mix of multiple civic ideas. Smith explores the United States’ conception of citizenship by examining all federal statutes and all federal, circuit, and Supreme Court decisions from the nation’s origins (1798) to the progressive era (1912), and he argues that three conceptions of citizenship can (and usually do) exist together in the same polity. These three correspond with liberalism, “ascriptive inegalitarianism” (which supports the superiority of the origins of current rulers), and republicanism,6 which can be expressed simultaneously “in logically inconsistent but politically effective combinations.”7 In his analysis of the American Revolution, de Tocqueville described this nation as an essentially liberal democratic society, especially since it appeared remarkably egalitarian in comparison to the class hierarchies in Europe. Even if some inconsistencies could be pointed out, as in attitudes towards slavery, de Tocqueville depicted them as temporary exceptions likely to dissipate in time, particularly through universal liberal citizenship laws. However, careful analysis of court rulings on important citizenship issues covering three centuries of American history shows that for over 80 percent of this history U.S. laws declared that most of the world’s population was ineligible for full American citizenship solely because of race, origins, or gender. In the same manner, for at least two-thirds of its history, the majority of the domestic population in the United States was also ineligible for this political status. The Tocquevillian and post-Tocquevillian theses falter because they center their examinations on the dominant minority in American history—European white men. That is, the relative egalitarianism among white men was surrounded by abundant structured ethno-national hierarchies that accorded all other non-male, non-white, non-Christian, non-heterosexual people an inferior political status. Smith suggests replacing the Tocquevillian perspective with a view of America as having overlapping and multiple traditions so as to be able to pay appropriate attention to oppression and inequality within the United States.

Smith’s is not the only criticism of Brubaker’s path-breaking 1992 study. Theories of citizenship have been constantly revised to better correspond to real-life situations. The unitary point of view has been criticized in several ways. One is that citizenship is not consistent for each nation-state but highly dependent on internal and external historical developments. According to another, citizenship is not an independent “cultural idiom” but a value contingent on internal and external events.8 And a third is that citizenship might be coherently defined, but only as the outcome of the political struggle between permanent interest groups (each possessing different conceptions of citizenship).9 Nevertheless, for all their differences, these still accept the underlying principle that citizenship involves a coherent and stable worldview (at least for particular groups within the state).

Following Brubaker’s initial work on citizenship, many scholars chose to explore naturalization as a focal point where the “nature” of citizenship and nationhood is brought into sharp focus. “Admission and exclusion are at the core of communal independence. They suggest the deepest meaning of self-determination.”10 Determining who becomes a member is the state’s way of shaping and defining the national community. Thus, granting citizenship is a powerful tool in maintaining the state’s sovereignty, especially in times when it confronts substantial external pressures (such as transnational migration), which can undermine its independence and self-determination. However, concentrating only on the inclusion mechanism can be misleading. On the one hand, politicians choose agreed-upon standpoints and “avoid ‘compromising’ stances, which would mean being of the same mind as the occupants of opposite positions in the space of the political field.”11 The centrality of immigration policies and the vast public attention it draws force politicians to distinguish themselves by using definite and opposing political philosophies. Hence, focusing on incorporation regimes may mislead one to conclude that all policies are coherent and stable. On the other hand, looking only at inclusion does not take into account Walzer’s assertion that both admission and exclusion are at the core of communal independence. In this book, I concentrate on the revocation of citizenship in order both to understand why states take away citizenship and to better explain what citizenship is.

Before explaining the reasons for and mechanisms of taking away citizenship, I wish to consider the hegemonic national logic in which modern citizenship is embedded and which constitutes the backdrop for the need to take away citizenship.

As empires disintegrated, the modern states that grew out of them attempted to establish sovereignty over heterogeneous communities and promote an ideology of national homogeneity, persecuting social groups that failed to comply with the unifying ethos. The nation-state typically pursues a tight fit between the perceived ethnic, religious, cultural, or political borders of nationality and its territorial borders. Nationality is constructed around ethnic, religious, cultural, or political identities and by excluding groups that clash with such cohesive factors.

The ideas of nationalism and nations coincide with the arrival of modernity as a powerful order-building system. “Throughout the era of modernity, the nation-state has claimed the right to preside over the distinction between order and chaos, law and lawlessness, citizen and homo sacer, belonging and exclusion, useful (=legitimate) product and waste.”12 The nation-state came into being in the eighteenth century in America and Europe, flourished in Europe in the late nineteenth century, and from then on spread to other regions of the world. The modern state signifies the making of a universal legal and constitutional order.13