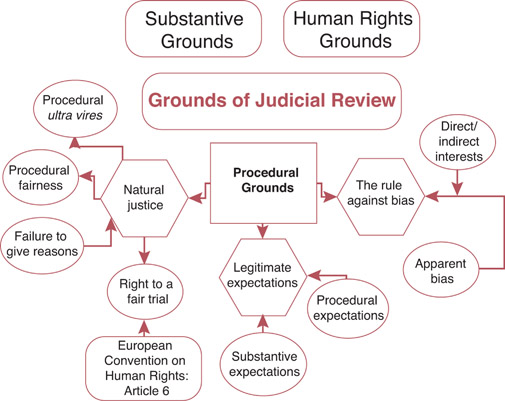 15.1 An overview of procedural grounds for judicial review

15.1.1 Lord Diplock in the GCHQ Case (discussed above) described procedural impropriety as ground of judicial review to include ‘the failure to observe basic rules of natural justice or failure to act with procedural fairness’ and also ‘failure… to observe procedural rules expressly laid down in… legislative instrument’.

15.1.2 This chapter considers the different procedural grounds that taken as a collective whole can be said to encompass the fuller concept of procedural impropriety.

15.2.1 The origin of the ‘natural justice’ principles of procedure is found in the common law. They effectively require a public body to act fairly.

15.2.2 With the passing of the Human Rights Act 1998, Article 6 of the ECHR, which requires ‘a fair and public hearing within a reasonable time by an independent and impartial tribunal established by law’, is now enforceable in English courts.

The right to a fair hearing (audi alteram partem)

15.2.3 Traditionally the courts would only apply the right to a fair hearing to judicial decisions: Local Government Board v Arlidge (1915).

15.2.4 In Ridge v Baldwin (1964), however, it was concluded that irrespective of whether a decision is judicial or administrative there is, in principle, a right to be heard. Judicial proceedings will attract a higher procedural standard of the right to a fair hearing than administrative decisions.

15.2.5 One exception to the right to be heard is where there are overriding factors in the interests of national security: GCHQ Case (above). (See also R v Secretary of State for Transport, ex parte Pegasus Holdings Ltd (1989).)

15.2.6 Failure to permit a hearing may also not invalidate the decision when the court concludes that the outcome of the decision would have been the same regardless. For example, in Glynn v Keele University (1971) the court dismissed an application by a student against their expulsion from the university on the basis that no representation by them would have affected the decision.

15.2.7 Whether a hearing is itself fair is not subject to fixed requirements, although the more serious the consequences for the individual, the higher the standard required for the hearing to be fair.

15.2.8 A fair hearing could require one or more of the following requirements therefore, depending on the facts of the case:

15.2.9 For example, there is no absolute right to an oral hearing. According to R v Army Board of the Defence Council, ex parte Anderson (1992), whether an oral hearing is required for the hearing to be fair will depend on the subject matter and circumstances of the particular case. Consequently the question is whether any written proceedings are sufficient to ensure a fair hearing.

15.2.10 Arguments that an oral hearing is an entitlement of a person who may be deprived or may continue to be deprived of a fundamental right, such as their liberty, will be well received by the courts however: see Osborn v Parole Board (2013). The right to cross-examine any witnesses will only arise if there is an oral hearing.

15.2.11 Similarly, the right to legal representation will depend on the nature of the hearing and the rights that will be affected. In R v Secretary of State for the Home Department, ex parte Tarrant (1985) the criteria to be applied in determining whether legal representation is necessary include:

15.2.12 There does, however, appear to be no such discretion when the matters are ‘criminal’ – for example, in Ezeh v UK (2002) a prison governor’s decision not to allow legal representation at a disciplinary hearing was a breach of the right to a fair trial (Article 6 ECHR).

15.3 Bias: the rule against bias (nemo judex in causa sua)

15.3.1 Impartial and independent decision-making is a fundamental aspect of the rule of law.

15.3.2 The rule against bias is described as being strict in that the risk or appearance of bias will suffice. As stated by Lord Hewart in R v Sussex Justices, ex parte McCarthy (1924), ‘justice must not only be done but must manifestly and undoubtedly be seen to be done’.

15.3.3 If a decision-maker becomes aware that they may be biased, they should remove themselves from the decision-making process: AWG Group v Morrison (2006).

15.3.5 This principle, of automatic disqualification because of a direct interest, was extended in R v Bow Street Metropolitan and Stipendiary Magistrate, ex parte Pinochet Ugarte (1999). In this case extradition proceedings were challenged on the basis that Lord Hoffmann had links with Amnesty International, which had provided evidence. Whilst there was no evidence of actual bias, it was concluded that there could be the appearance of bias and therefore the case was re-heard. The House of Lords stated that any direct interest whether financial, proprietary or otherwise would lead to automatic disqualification.

15.3.6 In other instances, where there is no direct personal interest but a non-direct interest that may give the appearance of bias, the court will examine whether in the view of a ‘fair minded and informed observer’ taking into account all the circumstances there is a ‘real possibility’ of bias: Porter v Magill (2002).

Failure to give reasons as a potential ground of judicial review?

15.3.7 Numerous statutes impose a duty to provide reasons. For example, there is a duty to give reasons on request in tribunals and public inquiries: Tribunals and Inquiries Act 1992.

15.3.8 There is no absolute duty to give reasons under the common law rules of natural justice, although there is a strong presumption that they should be provided: R v Secretary of State for the Home Department, ex parte Doody (1993).

15.3.9 There have been developments in the common law though where reasons must be provided. These include, for example:

15.3.10 Conversely, there are situations where there will be no duty to provide reasons. This may occur where to do so would be extremely costly or particularly onerous on the decision-maker, or where the reasons for a range of potential decisions are laid out in advance of a final decision by the decision-maker: see R v Higher Education Funding Council, ex parte Institute of Dental Surgery (1994) and R (Asha Foundation) v Millennium Commission (2003).

15.3.11 Where a Minister fails to provide reasons for a decision, the court may infer that there were in fact no proper reasons for that decision: Padfield v Minister of Agriculture, Fisheries and Food (1968).

15.3.12 Where reasons are required, they must enable the parties to understand the basis for the decision, but this does not necessarily mean they have to be detailed or comprehensive. The level of detail necessary will depend on the facts of the case: South Buckinghamshire DC v Porter (2004).

15.3.13 Article 6 of the ECHR does not explicitly require the giving of reasons. However, it could be implied because of the need to have reasons in order to be able to exercise any right to appeal. Article 5 of the Convention, however, expressly states in the context of the right to liberty and security that arrested persons shall be informed promptly and in a language they understand of the reasons for their arrest.

15.4.1 Legitimate expectation is a well-accepted principle of EU law, and has been increasingly recognised by the English courts. It occurs when the decision-maker, by either their words or actions, creates a reasonable and therefore legitimate expectation that certain procedures will be followed in reaching a decision.

15.4.4 For a promise to create a legitimate expectation it must be clear, unambiguous and precise: R v Inland Revenue Commissioners, ex parte MFK Underwriting Agents Ltd (1990). However, the individual does not have to be aware of it, since it is the decision-maker who should be aware of any expectation created: R (Rashid) v Secretary of State for the Home Department (2005).

15.4.5 Some examples of where there was a clear, unambiguous and precise promise, creating a legitimate expectation, include:

15.4.6 Examples of where the promise was not considered sufficiently clear, unambiguous and precise enough to create a legitimate expectation include:

15.4.7 It should be noted that a legitimate expectation cannot arise from a promise or representation that is unlawful: R v Ministry of Agriculture, Fisheries and Food, ex parte Hamble (Offshore) Fisheries Ltd (1995) and R (Bibi) v Newham LBC (2001).

15.4.8 The question of whether there is an enforceable legitimate expectation is more complex when it involves a situation where there has been a change of policy.

15.4.9 Whilst legitimate expectation as a ground for judicial review promotes certainty and trust in executive authority, thus upholding the rule of law, it must also be recognised that the executive must be able to develop, adapt and change policies particularly if in the public interest.