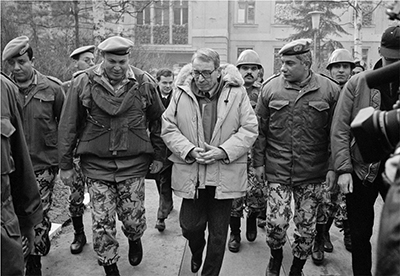 “Certainly the idea of an international police force effective against a big disturber of the peace seems today unrealizable to the point of absurdity.” It was an unexpected line from Lester B. Pearson, delivered as part of his Nobel Peace Prize acceptance speech in December 1957. After all, peacekeeping is among the most visible roles that the UN has played on every continent (save North America). At the end of 2014 there were sixteen individual active missions, manned by approximately 100,000 soldiers from 128 countries. Yet as Pearson, whose remarkable career included stints as Canada’s foreign and prime minister, indicated, trust in the success of such operations has not always been excessively high.1

Indeed, as Pearson—who was at the time the Canadian representative at the UN and who can take much of the credit for the creation of the first large-scale peacekeeping force in 1956 (to protect the Suez Canal)—perceived six decades ago, the UN has not lived up to the high expectations of its founders. One statistic illustrates this fact: between 1948 and 1988 the UNSC had authorized only thirteen peacekeeping missions. In those same years a number of interstate and an increasing number of intrastate (or civil) wars took place around the globe. In 1982 alone, more than forty intrastate conflicts were under way. 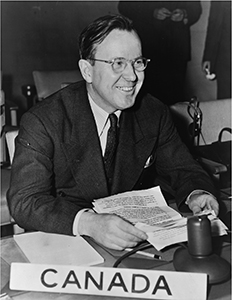 7. When Lester Pearson, Canada’s delegate to the UN, won the Nobel Peace Prize in 1957, the citation praised him, in part, for his consistently “realistic and positive attitude.…Lester Pearson’s vision is not that of a dreamer. He looks at life and the conditions of the world as they are, basing his conclusions on realities.”

Cold War pressures, particularly the inability of the Security Council to agree on matters of war and peace in a charged East-West context, explain part of the imperfect record. But even after the Cold War, UN peacekeeping has been faced with numerous problems that have shattered the image of benevolence and neutrality that the world body is supposed to project. In the 1990s genocides (in Rwanda) and ethnic cleansing (in the former Yugoslavia) took place despite the presence of blue-helmeted forces in those areas.

If anything, UN peacekeepers face more formidable challenges today than they did when they first took to the field in the 1950s. This is mainly because peacekeeping is no longer just about standing between two hostile sides in order to pacify a war and allow diplomacy take its course. Today’s peacekeeping activities–or “peace operations”—are far more complex in nature: keeping peace is not the same thing as making and building peace.

The UN Charter and peacekeeping

The UN Charter itself does not refer to “peacekeeping,” but the concept developed (and became a central part of the UN’s agenda) in later years. This was in part a result of the simple fact that the fifty-one founders of the UN rejected the idea that the organization could intervene in internal affairs of a country. Thus peacekeeping—which eventually meant placing military contingents within the borders of a state for the specific purpose of blocking hostilities—could easily be regarded as a breach of national sovereignty. To guard against that possibility, “traditional”—or what is often referred to as “first generation”—peacekeeping was possible only with the consent of the hostile parties. Unfortunately this could also work in reverse: a “host” country could demand that the UN peacekeeping force exit its territory (for example, Egypt in 1967) or simply refuse them entry.

Nor did the UN have the means at its disposal for extensive peacekeeping missions. The idea of having permanent UN bases scattered around the world, originally envisioned in article 43 of the UN Charter, never got off the ground. Though this failure owed much to the emergence of Soviet-American rivalry in the immediate postwar years, it was also linked to the reality that the world of 1945 was governed with empires that assumed that they were entitled to play the role of a policing power within their “sphere.” Countries such as Britain and France considered their imperial possessions as falling within the limits of their national sovereignty. In possession of the veto right in the UN Security Council, they were in a position to block the establishment of anything resembling an international rapid-reaction force.

However, the swift dissolution of European empires in the aftermath of World War II created problems and conflicts that required a new kind of policing power. In 1947–48 the large-scale killings related to the partition of India and Pakistan, as well as the first Arab-Israeli War and the emergence of the Palestinian refugee issue, clearly indicated that the UN required a military arm if it was ever to subdue conflicts around the globe. These two crises resulted in the founding of the two longest-lasting UN peacekeeping missions: in May 1948 the United Nations Truce Supervision Organization (UNTSO) in the Middle East was established with headquarters in Jerusalem; in January 1949 the UN Military Observer Group in India and Pakistan (UNMOGIP) was deployed to monitor the ceasefire in the Kashmir region. Both were and remain small-scale observatory missions. Their extraordinary longevity is not a happy symbol for either region.

The Korean conflict of 1950 saw the deployment of the largest UN force in a conflict area. But the purpose of the American-dominated mission was to counter an attack that had already taken place, not to police a fragile peace. Less well known is the fact that UN peacekeepers remained on the South Korean side of the demilitarized zone until 1967, at which point U.S. and South Korean troops took over.

It was only in the mid-1950s that peacekeeping—“the first genuinely international police force,” as Pearson put it—was born.

The Egyptian nationalization of the Suez Canal in the summer of 1956 was followed by an Israeli invasion and Anglo-French intervention. With the UNSC paralyzed, the General Assembly passed a landmark resolution (GA Res. 998) on November 4, 1956 authorizing the Swedish Secretary-General, Dag Hammarskjöld, to raise and deploy a UN Emergency Force (UNEF), responsible to Hammarskjöld and headed by a neutral officer. The proposal originated with Lester Pearson, who initially suggested that the force consist of mainly Canadian soldiers. But the Egyptians were suspicious of having a Commonwealth nation defend them against Great Britain and her allies. In the end, a wide variety of national forces were drawn upon to ensure national diversity. Pearson received the 1957 Nobel Peace Prize for his role and is today considered the father of modern peacekeeping.

On November 4, 1956, the UN General Assembly adopted a Canadian proposal that requested, “as a matter of priority, the Secretary-General to submit to it within forty-eight hours a plan for the setting up, with the consent of the nations concerned, of an emergency international United Nations Force to secure and supervise the cessation of hostilities” along the Suez Canal. The vote was 57 to 0, with 19 abstentions. Egypt, France, Israel, the United Kingdom, the Soviet Union, and various eastern European states were among the abstainers.

The purpose of the 6,000-strong multinational peacekeeping force was straightforward: to erect a physical barrier between Israel and Egypt. It worked, if only for a decade. UNEF’s presence depended on the consent of the regional (or host) nations. In 1967 Egyptian leader Gamal Abdel Nasser told UNEF to leave shortly before the so-called Six-Day War, during which Israel occupied the Sinai peninsula (as well as the Golan Heights and the West Bank).

The main significance of the Suez crisis from the perspective of the UN was as a prototype of modern peacekeeping. In numerous other conflicts after 1956, the blue helmets, worn mainly by soldiers from countries that were not among the P-5, would arrive and provide a shield against future hostilities. They would not be authorized to fire their guns except in self-defense.

As its name implies, UNEF was created simply to soothe an emergency situation. Its job was not to resolve the deeper sources of the conflict or enforce a permanent settlement. Moreover, the blue-helmeted soldiers who were stationed on the western part of the Sinai peninsula could be told to leave by their host country, Egypt, at any moment. In other words, peace could ultimately be kept only if those on either side of the conflict found it in their interest. A decade after the Suez conflict the Egyptians asked UNEF peacekeepers to leave on the eve of the Six-Day War. The repercussions of that 1967 conflict set the backdrop for the seemingly never-ending Israeli-Palestinian conflict.

Despite its limited long-term success, the prototype established at Suez was the general model used in most Cold War–era UN peacekeeping missions. The particular characteristics of this type of “first generation” peacekeeping mission were their stringent neutrality and impartiality in the conflict in question, which allowed the UN and its member states to refrain from choosing sides. In an era characterized by the East-West rivalry, this was virtually the only way in which an international military mission could gain the support of states on opposite sides of the Cold War divide. However, the emphasis placed upon monitoring the situation, rather than influencing it, the need to have the consent of the conflicting parties, and the nonuse of force (except in self-defense) made the Suez prototype unfit for all types of conflict situations, particularly the many succession struggles that erupted in the aftermath of European decolonization in the 1950s and 1960s.

UN peacekeeping operations have greatly evolved in their purpose and complexity over the years. Observers thus like to divide them into three or four groups, usually referred to as “generations.” Although the word is misleading in that implies a clear chronological progression rather than the parallel existence of several types of operations, the generations can roughly be defined as follows (this is not the only possible division; others talk of as many as six generations of peacekeeping):

First Generation peacekeeping (or traditional peacekeeping) refers to operations aimed at creating a physical barrier between two warring parties—both of them internationally recognized states—that have given their consent to peacekeepers’ presence. The classic example of this type of an operation is the role of the United Nations Emergency Force (UNEF) after the 1956 Suez crisis.

Second Generation peacekeeping (or peacebuilding) refers to the implementation of complex, multidimensional peace agreements, mostly in the aftermath of civil wars. Again the consent of the various parties is required, but they are usually not both (or all, if more than one) states. In addition to traditional military functions, peacekeepers play a role in various police and civilian functions. The goal is the long-term settlement of the underlying conflict. Examples of this type of operations include Namibia in 1989–90 and Cambodia in 1991–93.

Third Generation peacekeeping is often referred to as peace enforcement. These activities include low-level military operations, enforcing cease-fires, and rebuilding “failed states.” The problem with the use of the term “generation” is particularly evident here: the Congo mission in the early 1960s was essentially the first example of peace enforcement, third generation peacekeeping actually predated the second generation ones. Two of the more recent examples of this type of operations are former Yugoslavia and Somalia in the 1990s.

Fourth Generation peacekeeping (rarely called such) refers to delegated peacebuilding when, for example, the UN subcontracts various peacebuilding and peacekeeping tasks to, say, regional organizations. Perhaps the best known example of this is NATO’s role in Bosnia from the mid-1990s on.