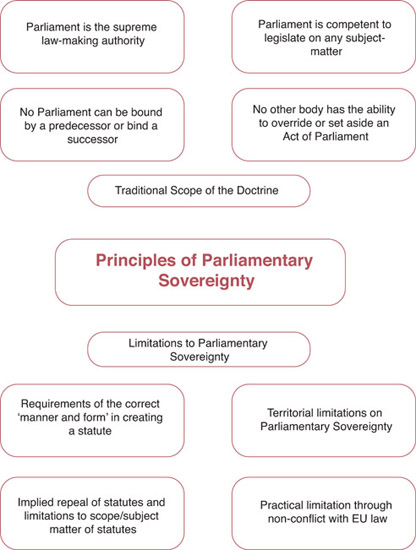 3.1.1 One of the key characteristics of the British constitution is the dominance of the legislature, Parliament. A result of the historical struggle between the Crown and Parliament (culminating in the Bill of Rights 1688), the doctrine is not laid down in statute but is a fundamental rule of common law. In other words, it is the judiciary that has created and maintained the doctrine as a basic principle of the constitution.

3.1.2 The classic definition of parliamentary supremacy is that offered by Dicey:

3.2.1 Parliament theoretically has unlimited legislative power – that is, the potential ability to create any law.

3.2.2 This ‘unlimited legislative power’ principle means that Parliament traditionally has the authority to legislate on any subject matter. Examples include the following:

3.3 Exploring the details of legislative supremacy

3.3.1 It is often observed that ‘No Parliament can be bound by a predecessor or bind a successor’. This means that each and every Parliament must be supreme in its own right.

3.3.2 Consequently, no Parliament can be bound by a preceding Parliament, or bind a future one. The mechanism for securing this principle is known as the doctrine of implied repeal.

3.3.3 Parliament may expressly repeal any previous law. The courts must then give effect to the later statute. However, Parliament may not expressly repeal earlier legislation leaving two or more conflicting statutes. The doctrine of implied repeal then applies, in that the courts are required to apply the latest statute, considering earlier law to be impliedly repealed – see Vauxhall Estates Ltd v Liverpool Corporation (1932) and Ellen Street Estates Ltd v Minister of Health (1934).

3.3.4 The consequence of the application of implied repeal is that no legislation can be entrenched, in other words protected from future changes in the law that Parliament may wish to make.

3.3.5 It is also often claimed that ‘No other body has the ability to override or set aside an Act of Parliament’.

3.3.7 The courts no longer assert this authority and instead apply the principle that once an Act is passed, it is the law. This is known as the enrolled Act rule. Consequently, the enforcement of the procedural rules for creating an Act is in the hands of Parliament and the courts will refuse to consider whether there have been any procedural defects – see Edinburgh and Dalkeith Railway v Wauchope (1842), Lee v Bude and Torrington Junction Railway Co (1871) and Pickin v British Railways Board (1974). All a court can do therefore is to construe and apply Acts of Parliament.

3.3.8 In order for an Act to exist, it must comply with the requirements of common law on the creation of statute law. A Bill becomes an Act if it has been approved by both Houses of Parliament (unless the Parliament Acts 1911 and 1949 are invoked) and has received the Royal Assent.

3.3.9 Other requirements, such as standing orders, conventions and practices govern the passage of a Bill through the Houses and the enforcement of these rules is a matter entirely for Parliament.

3.4.1 There are said to be limitations to parliamentary supremacy relating to what is known as the ‘manner and form’ of legislation, and the way that legislation is created. Typically controversy arises in this context if the House of Commons attempts to legislate in a manner that precludes the approval of new legislation by the House of Lords, also part of the Westminster Parliament; something that is possible under the Parliament Acts.

3.4.2 An example of this can be seen in the Colonial Laws Validity Act 1865 and its interpretation in Attorney-General for New South Wales v Trethowan (1932). In this case the New South Wales legislature was bound in the way in which it abolished its Upper House.

3.4.4 In R (Jackson) v Attorney-General (2005) it was argued that the Parliament Act 1949 was invalid and that consequently the Hunting Act 2004 passed under it was also invalid, because the parliamentary House of Lords was bypassed in the creation of the 2004 Act using the mechanism allowed for in the 1949 Act. The judicial House of Lords held that the 1949 Act was valid. Consequently it appears that the Parliament Acts could technically be used to achieve constitutional change without the consent of the House of Lords.

3.4.5 However, this was expressly doubted by Lord Steyn, who implied that the courts would continue to have a role in ascertaining whether the use of the Acts was constitutionally proper or correct. Using the Acts in a way that was unchecked and increasingly common would probably also raise considerable political criticism.

3.4.6 Whilst Parliament may technically have the authority to legislate for anywhere in the world (extra-territorial jurisdiction), there are geographical limitations to the ability to enforce that law. Hence, the practical consequences render the law unenforceable and therefore redundant.

3.4.7 For example, in 1965 Parliament attempted to assert control over what was then Southern Rhodesia by passing the Southern Rhodesia Act. This invalidated any legislation passed in the country. Parliament’s competence to pass such an Act was affirmed in Madzimbamuto v Lardner-Burke (1969). However, the practical effectiveness of the Act was limited by the fact that it could not be enforced. Hence, de jure power may have rested in the Westminster Parliament, but de facto power was in the hands of the Rhodesian Government.

3.4.8 We can see this recognised by the courts: