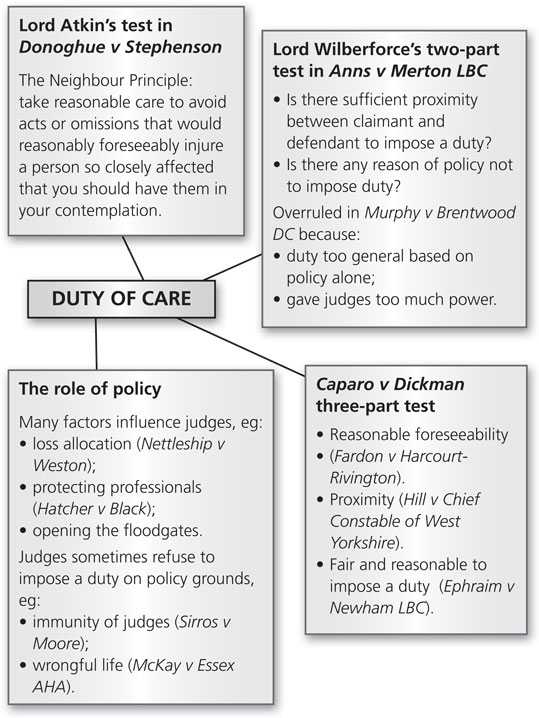 1.  The modern starting point is Lord Atkin’s judgment in Donoghue v Stevenson (1932), which established negligence as a separate tort – though its origins were in actions on the case.

2.  A new approach was needed, as no other action was available.

Negligence is a separate tort.

Lack of privity of contract is irrelevant to mounting an action.

Negligence is proved as a result of satisfying a three-part test:

(i) there must be a duty of care owed by defendant to claimant;

(ii) the duty is breached by the defendant falling below the appropriate standard of care;

(iii) the defendant causes damage to the claimant that is not too remote a consequence of the breach.

Lord Atkin’s ‘Neighbour Principle’: ‘You must take reasonable care to avoid acts or omissions which you can reasonably foresee would be likely to injure your neighbour. Who, then, in law, is my neighbour? Persons who are so closely and directly affected by my act that I ought reasonably to have them in my contemplation as being affected so when I am directing my mind to the acts or omissions in question’.

A manufacturer owes a duty to consumers and users of his products not to cause them harm.

6.  Policy has always been a crucial element so the court will not only decide whether there is a duty, but whether there should be.

7.  Many factors influence the judges:

8.  Judges have often cited policy when refusing a duty of care:

where claimant is responsible for own misfortune (Governors of the Peabody Donation Fund v Parkinson (1984)).

9.  At one point Lord Atkin’s test was simplified by Lord Wilberforce in Anns v Merton LBC (1978) into a two-part test.

a)   Is there sufficient proximity between defendant and claimant to impose a prima facie duty?

b)   If so, does the judge consider that there are any policy grounds which would prevent such a duty being imposed?

10.  The Anns test was always seen as too broad because:

a)   it creates a general duty based only on proximity;

b)   it gives judges too much power to decide on policy alone.

d)   in Harris v Perry (2008) it was held that it was impractical for parents to keep children under constant supervision and it would not be in the public interest for the law to require them to do so.

15.  The Anns test was flawed, but the new test is arguably no better:

it claims to follow the separation of powers theory;

but it is more complex and secret, and restricts development. 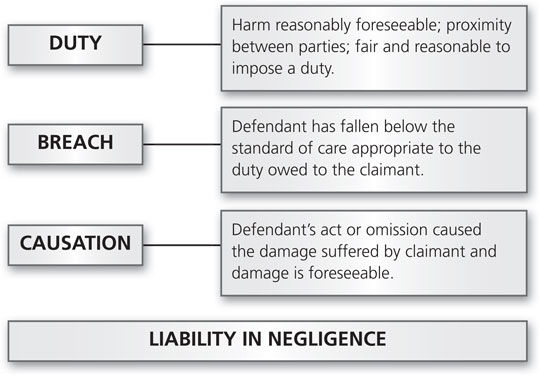 What must be proved for negligence

2.  Negligence is not mere carelessness, so no duty no liability.

a)   Is the situation or loss of a type to which negligence applies?

b)   Does the defendant owe a duty to the actual claimant?

6.  However, courts have also considered many controversial situations.

2.2 Breach of the Duty of Care

2.2.1 The Standard of Care and Reasonable Man Test 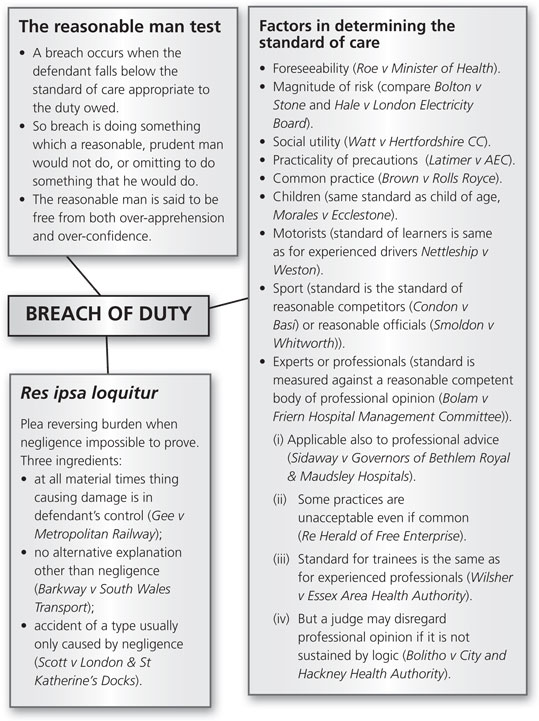 1.  A breach occurs whenever a defendant falls below the standard of care appropriate to the particular duty owed.

3.  The reasonable man has been described as ‘the “man on the street” or “the man on the Clapham omnibus” …’

4.  Or, as MacMillan L.J. put it in Glasgow Corporation v Muir (1943), the test is ‘independent of the idiosyncrasies of the particular person whose conduct is in question … The reasonable man is presumed to be free from both over-apprehension and over-confidence’.

5.  So breach of duty then is merely the same as fault.

who can best bear the loss;

whether or not the defendant is insured;

the justice of the individual case;

how the decision affects society as a whole.

7.  Judges have established criteria by which to measure the standard.

2.2.2 Principles in Determining the Standard of Care

1.  Foreseeability: no obligation for defendant to compensate for incidents beyond his normal contemplation or outside his existing knowledge; compare Roe v Minister of Health (1954) with Walker v Northumberland County Council (1995).

3.  Social utility: a risk averting a worse danger may be justified (Watts v Hertfordshire CC (1954)), but not any risk at all (Griffin v Mersey Regional Ambulance (1998)).

4.  Practicality of precautions: need not take extraordinary steps or suffer extraordinary cost (Latimer v AEC (1953)) – but if defendant is in sufficient control to avoid harm then s(he) is obliged to act (Bradford- Smart v West Sussex County Council (2002) on preventing bullying in schools).

b)   The disabled and sick: standard appropriate to disability.

c)   Motorists: the same standard applies to all drivers, even learners (Nettleship v Weston (1971)) and one becoming ill while driving (Roberts v Ramsbottom (1980)), but not if unaware of the illness (Mansfield v Weetabix Ltd (1997)).

7.  Experts and professionals are not bound by the standards of a reasonable man but those of a reasonable practitioner of that particular skill or profession (Bolam v Friern Hospital Management Committee (1957)).

d)   Some practices are unacceptable even though common (Re Herald of Free Enterprise (1989)).

f)   The test applies even if the defendant does not have full professional qualifications (Adams v Rhymney Valley DC (2000)).

g)   The rule has been approved since. ‘There is seldom any one answer exclusive of all others to problems of professional judgement.
A court may prefer one body of opinion to the other; but that is no basis for a conclusion of negligence …’ Per Lord Scarman in Maynard v West Midlands RHA (1985).

h)   Only a small number of doctors following the practice is sufficient to relieve liability (De Freitas v O’Brien and Conolly (1995), where 11 out of 1000 would have operated).

i)   However, the test has been subject to many criticisms:

it allows the professionals to set the standard;

it is inconsistent with negligence principles generally;

it can often legitimize quite marginal practices;

definition of a competent body of opinion is too imprecise;

the test can lead to professionals closing ranks.

Thompson v James and Others (1996) – failure by GP to follow guidelines in warnings about measles vaccinations, and claimant brain damaged as a result.

k)   If the judge feels that the opinion held is not sustained by logic, then it may be disregarded (Bolitho v City and Hackney Health Authority (1997)).