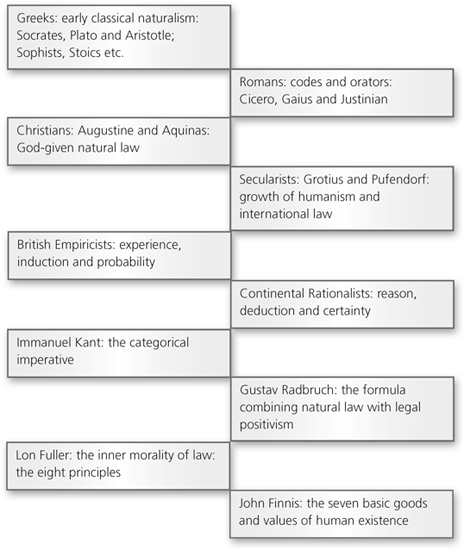 1.  Probably the most famous early Greek philosophers were Socrates, Plato and Aristotle, their objective being to study what they perceived as the nature of things; they identified an unchanging nature that was paramount and pre-eminent above all other things.

2.  Socrates (469–399 BCE) did not leave any writings of his own, other than indirectly via his student Plato, but he believed that:

(a)  instinct was not enough to explain human nature

(b)  there must be a higher power, which he thought of as reason or intellect

(d)  virtue is knowledge, and humans should be wise in everything they do in life.

3.  Plato (427–347 BCE) was a disciple of Socrates and developed his thoughts and beliefs into what became known as the Platonic ideal:

(b)  justice is reflected in the notion of ‘order’ or harmony

(c)  the orders of Greek society were the:

(d)  this was in turn reflected in the three parts of the human soul, namely:

4.  Plato’s great work was The Republic, which took the form of a dialogue in which he used various characters to represent differing points of view, by asking questions of the sort that his own teacher Socrates had used (hence the ‘Socratic’ question and answer method of teaching).

(a)  the nature of a thing is its end, and he looked to human nature for answers to philosophical questions

(b)  mankind achieves knowledge by learning about its own nature, hence the aphorism (summary of the principle) expressed as Know Thyself.

6.  Other works were Ethics and Politics, which were based on the fundamental premise that all men act for some good and that their end in life is to do good.

7.  He wrote about the four ‘causes’ which he identified as:

8.  By ‘end’ he meant the whole activity of man as established in the form of human nature, and the need to achieve fulfilment by completion of a person’s development.

2.1.2 Other Greek Movements and Ideas

1.  The Sophists preferred to use argument or rhetoric rather than these kinds of detailed theories of knowledge, so they developed and perfected the art of persuasion and became famous orators, exemplified by:

Gorgias of Leontini, who said that he did not need to know about a subject in order to be able to answer questions about it.

2.  By Plato’s time there had developed some prejudice against the Sophists, and by Aristotle’s time the word had become something of a term of abuse.

3.  The Stoics developed a theory of natural law that used as its basis some of the ideas of Plato and Aristotle, believing that natural law is:

(a)  right reason in agreement with nature

(b)  of universal application, unchanging and everlasting

(d)  unalterable, and that to try to change it would be sinful.

4.  Their ideal man was one guided through his life by reason, citizens of the then known world equally at home in the Persian (Iranian), Hellenistic (Greek) or Roman civilisations, and more particularly they:

(b)  were tolerant of people who worshipped other gods (pantheism)

(c)  were scientists, believing in a universe designed in accord with divine reason and governed by divine providence, the purpose of mankind being to live a good life in accordance with natural laws

(d)  had a keen sense of duty, which later came to be reflected in the ideals of the Romans.

5.  Sceptics were exemplified by Pyrrho (c. 365–275 BCE) and believed that real knowledge of things is impossible.

6.  Epicureans took their name from Epicurus (341–270 BCE) and believed that the highest good is to seek pleasure or freedom from pain, a philosophy that resurfaced in the 19th-century ideas of the utilitarian movement (chapter 6).

1.  The Romans had considerable interest in adapting and developing Greek ideas to benefit the expanding Roman Empire because:

(b)  the Romans had conquered most of the known world, so they could administer that law everywhere, with as much Roman flavour as they could manage.

2.  They believed in and developed a number of ideas including:

(a)  ius naturae, almost the same idea as the law of nature, meaning a law supported by natural reason, i.e. it should also be a law applicable to all nations, thus acting as a support for ius gentium

(b)  ius gentium or the law of nations, used to describe the laws that the Romans found common to different states, as opposed to their own municipal laws, although it was also used in a different sense to mean those laws that applied both to citizens and foreigners

(c)  ius civile, on the other hand, was the main body of Roman civil law that originally only applied to Roman citizens.

(a)  true law is right reason in agreement with nature, diffused among all men, constant and unchanging

(b)  to curtail that law is unholy, to amend it illicit, and to repeal it impossible

(c)  all men could therefore potentially be equal in reason and understanding before that law, even if not in their material and human circumstances.

4.  Cicero is credited with combining the Stoic idea of a universal law of nature directing the course of human conduct, with the psychological attitude of the Sceptics, thus adapting the Greek tradition (for which he had great respect) with that of the Romans.

5.  Marcus Aurelius (121–80 CE) followed the Stoic tradition, and was credited with reforming the laws to remove some of their contradictions and severe consequences, for the benefit of minors, women and slaves.

6.  Gaius (or Caius) (130–80 CE) was a jurist of the Sabinian school who wrote his Institutes about 161 CE, and although not famous in his own times became so later because his work was subsequently used in a number of different ways and for a variety of purposes:

(b)  as a model for classifying the law into a tripartite or three divisional system comprising the law of:

(c)  by Justinian several hundred years later as the basis of his own Institutes.

7.  Justinian (527–565 CE) is remembered for a number of important and influential legal works, and he:

(d)  enacted new laws under the title of Novellae.

1.  One of the problems of trying to understand early jurisprudential ideas is the lack of continuity in written sources, but despite this traditions continued and developed and the links are there even when they cannot always easily be traced.

2.  Towards the end and after the fall of the Roman Empire, Christian influence grew and spread throughout the known world, and much of the philosophy of classical natural law was amenable to the Catholic Church, once it had been adapted to replace classical pantheistic ideas of multiple gods with one Supreme Being.

3.  Saint Augustine of Hippo (354–430 CE) was one of their greatest bishops and philosophers, and his works included Confessions and Retractations, On Free Will, and The City of God.

4.  As a Catholic theologian he was able to fuse Platonic philosophy with revealed dogma, but with the emphasis on Christianity wherever the two came into conflict which came to be known as Christian Platonism.

5.  In De Civitate Dei (The City of God) he tried to show the human condition struggling against the forces of evil, pulled in contrary directions by good and wicked people.

6.  So the highest or eternal law is the will of God, with mankind’s positive law something of a lower order, whose purpose is merely to keep people in check.

7.  In 1140 CE the Catholic Church gathered together a version of Canonical law that provided the early medieval conception of what was meant by the law of nature (the Decretum Gratiani, the oldest collection of Church law embodied in the Corpus Iuris Canonici).

8.  It was believed that mankind is ruled by two types of laws, natural law and custom, natural law being that which is contained in the Scriptures and the Gospels.

9.  This concept of Christianised natural law formed the main basis of jurisprudential belief from the 5th century throughout the middle ages, and continued more or less unchallenged in the Western world until the intellectual developments of the post-medieval Enlightenment (section 3.3) and Reformation led to serious opposition and questioning of accepted beliefs.

1.  In the early part of the second millennium, Saint Thomas Aquinas (1225–74 CE) was probably the leading exponent of Christian natural law (Thomist philosophy), as explained in his book Summa Theologica.

2.  He classifies law into four categories:

(a)  eternal law, comprising divine reason which can only be understood by God, constituting His infinite and unknowable universal master plan

(b)  natural law, which mankind is able to discover by the use of reason, and which involves participation in God’s eternal purposes

(c)  divine law, the law that God has imposed on mankind which is learnt from the Bible

(d)  human laws, i.e. those imposed by temporal authorities on their subjects for their overall benefit, which are:

designed to deal with the realities of the world

recognition of what some six centuries later would become the subject matter for the Bentham–Austin command theories of positive law, the rule-based derivatives of Hart, and other 20th-century developments of this precursor of legal positivism.

3.  Law to Aquinas is rational regulation for the good of the community, made by the person(s) having powers of government and promulgated or published, which is what provides the positivist element.

4.  His idea of moral law may be described as the general principle that all finite beings move towards their ends by the development of their potentialities, which is sometimes referred to as Christian Aristotelianism.

1.  It is not practical to identify and do justice to all the writers and philosophers who went on subsequent to the 13th century to develop natural law theory, for a number of reasons:

(a)  there were religious and secular versions, which themselves varied considerably

(c)  the timescale involved covers some 2,500 years from the early Greeks to the present day.

2.  The persistence in combining religion (and by implication morality) with law when considering the essential requirements for a legitimate legal system meant that the scope of the subject widened as the centuries passed.

3.  A few of the more influential writers who had things to say about natural law and related philosophy in the 16th to 18th centuries include: