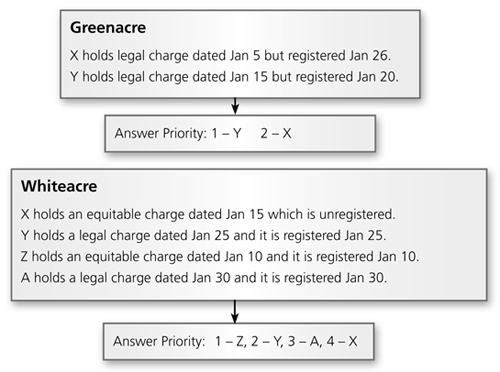 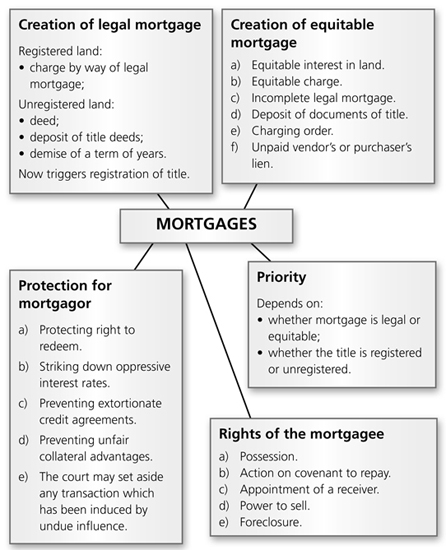 1.  A mortgage of land is the conveyance or transfer of land made to secure the future repayment of a loan or the discharge of some other obligation.

12.2 The Development of Mortgages at Common Law and in Equity

1.  Before 1926, when the owner of land took out a mortgage he/she actually conveyed the land to the lender, stipulating that, on a certain date, the mortgagee would reconvey the property back to the mortgagor.

2.  The repayment had to be on the date agreed and there was no scope for varying the date.

1.  Equity modified the effects of the common law in the 17th century and allowed the repayment to be made after the redemption date, called the ‘equitable right to redeem’.

2.  The mortgagor also remained the owner of the property even during the currency of the loan, but subject to the loan.

3.  If the mortgagee went into possession of the property then he/she had to account for any profit made.

12.3 The Creation of Mortgages

1.  Legal mortgages can only be created where the borrower has a legal interest (fee simple or term of years) in the property.

2.  In registered land a legal mortgage is created by a registered charge which can take two different forms.

a)  The most usual form is a charge by way of legal mortgage:

this is effective at law once it has been registered by the chargee entering as the proprietor of the charge in the Charges Register;

if it is not registered then it will only be effective in equity and will take effect as a minor interest requiring protection by notice or caution.

b)  It is also possible to create a mortgage by ‘charge by way of demise of a term of years’, which means that the mortgagee got a leasehold interest of 3000 years in the property. This means of creating a mortgage has now been abolished for mortgages of registered land under the LRA 2002.

4.  A first legal mortgage of an unregistered freehold or leasehold land executed after 1 April 1998 will trigger a requirement of first registration at HM Registry.

If there is no application for first registration of the mortgagor’s estate within two months, then the mortgage will lapse as a disposition of a legal charge.

The mortgagor will still have a legal estate but the mortgage will merely be a contract to create a legal charge and will take effect in equity only.

5.  Historically, mortgages in unregistered land were made by deposit of title deeds, as this was an effective safeguard against attempts to deal in the estate without notifying the first mortgagee.

These mortgages, if made after 1 April 1998, will trigger first registration of title.

Mortgages made prior to this date should have been registered at the Land Charges Registry as a Class C(i) land charge if they wished to have priority over other charges.

It was the only legal interest in land (called a puisne mortgage) that could be registered at the Land Charges Registry.

Today the creation of a mortgage will always act as a trigger for compulsory registration of the title.

12.3.2 The Creation of Equitable Mortgages

1.  There are many different forms of equitable mortgage. These are some examples:

A mortgage of a borrower’s equitable interest in land – this must be equitable because the borrower only has an equitable estate, e.g. a beneficial interest under a trust of land.

An informal or incomplete mortgage of a legal estate in land – e.g. a defect in the creation of a legal mortgage or failure to register the charge at the Land Registry.

An equitable charge – land charged with an obligation, such as the repayment of a debt, but unlike a mortgage no property passes to the chargee, only the right to sue for the debt.

Mortgage by deposit of documents of title, coupled with a written and signed contract of loan. Prior to the LP(MP) Act 1989 a mortgage could be created by depositing title deeds without the need for written documents (Russel v Russel (1783)). Today there must be a written contract.

1.  There are four main ways that equity has attempted to protect the mortgagor:

protecting the equitable right to redeem;

12.4.1 Protecting the Equitable Right to Redeem

1.  The mortgagor has the right to redeem the mortgage on the contractual date for redemption.

3.  The courts have struck down any attempt to ‘fetter the equity of redemption’ (Biggs v Hoddinott (1898)).

4.  Attempts to postpone the contractual date for redemption may be struck down where it results in reduction of value of the asset, e.g. a leasehold property (Fairclough v Swan Brewery Co Ltd (1912)).

1.  Mortgagees can reserve to themselves the right to vary the interest at any time.

2.  Control by the courts of oppressive interest rates depends largely on their inherent jurisdiction to declare any mortgage term ‘void’ if it is ‘oppressive’ or ‘unconscionable’.

3.  When the court reviews interest rates, they will only vary them if it sees the mortgagor is in a weaker bargaining position than the mortgagee (Cityland and Property (Holdings) Ltd v Dabrah (1968)).

4.  A borrower of ‘intelligence’ and a ‘man of business’ could not successfully challenge an interest rate of 75% (Carringtons Ltd v Smith (1906)).

5.  There is no objection in principle to the index-linking of mortgage commitments (Multiservice Bookbinding Ltd v Marden (1979)).

1.  Protection for mortgagors against unconscionable credit agreements is provided by the Consumer Credit Act 1974.