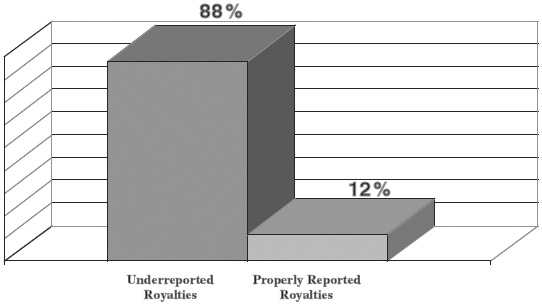 Licensors and licensees alike spend enormous amounts of time negotiating license agreements for intellectual property. Such negotiations generally include not only the royalty rate, but also how that rate is applied, and if and when it might vary. It is hoped this investment of time will result in a license agreement that is not only acceptable to both parties, but also clearly stated.

After the agreement is signed, however, the license is often put in a file drawer, never to be looked at again, except when problems arise. Why don’t licensors spend the same amount of time and effort in license monitoring as they do in securing the license agreement? After all, in a typical business transaction, parties do not rely on trust alone to document the exchange of goods and services; payment amounts are compared against invoices, shipping logs, or other documents from an accounting system.

It is the licensor’s fiduciary duty to insure that optimal royalties, at the negotiated royalty rate, are realized under each license agreement. This is true for both non-profit foundations and for-profit companies. Licensing provisions must be monitored, and prompt action taken if a licensee fails to comply with the agreement’s reporting, and royalty payment, requirements. This is not to suggest that licensors should become skeptical of business partners, or assume they are not trustworthy. Rather, it is just the best business practice to keep abreast of the situation so discrepancies can be identified early, before money is lost and the business relationship jeopardized.

Underpayment of royalties is common (see Exhibit 14.1). Even reputable and trustworthy licensees, who intend to pay the correct amount of royalties, often pay less than what is owed, due to misunderstandings and errors. As such, unmonitored license agreements leave valuable assets unprotected.

Why is it that licensors rarely monitor the process under which royalties are calculated and paid? Sometimes the lack of monitoring is due purely to a shortage of resources. In addition, for licensees, staff responsible for royalty calculations and license compliance are typically not the same people who negotiated the agreement. There may be interpretation differences, or simply a lack of understanding concerning what data are to be gathered and reported, or where to obtain required elements for calculations and reports. There also may be a disconnect because information systems are not available, or programmed, to accumulate the required items. For licensors, staff tasked with responsibility for monitoring compliance may be unfamiliar with the license terms, or mistakenly concerned that a monitoring program will send the wrong message.

License agreements can be complex, with the actual royalty calculation based on variable data, from multiple sources. Royalty audits are a common means of monitoring license compliance. Historically, companies have avoided royalty audits because they do not want to insinuate mistrust, and jeopardize the relationship. To respond to these concerns, licensors should be reminded of the similarities between license transactions and sales transactions. Just as sales customers are not insulted by verifying payments against invoices, licensees will not be upset by a similar examination of royalty streams.

Licenses create a symbiotic relationship; licensees need the license to develop, manufacture, or sell a product or service; licensors may become dependent on royalty income, or the research channel. It must be understood that the use of a royalty audit is not an accusation of fraud, but rather an acceptance of the potential for human error. In fact, license agreements generally include a clause permitting royalty audits; often the right is negotiated, and agreed to, as a condition of the license. Often, the licensee has agreed to retain documents specifically for this purpose. Licensors should guarantee accurate royalty streams, by invoking the system of checks and balances offered by a royalty audit.

Still concerned? There are several ways to minimize the likelihood that the licensee will be offended by an audit. Give them early notice, make audits routine, rather than in response to a suspected problem, and make it clear that all licenses of a certain size, or type, are always audited.

The give-and-take of the negotiating process often forces the licensor to agree to a lower royalty rate, or less favorable terms, than originally desired. If the licensor’s monitoring procedures are lax, then the gap between desired royalties, and royalties actually realized, is going to widen.

Many people think monetary license monitoring is limited to royalty audits. However, there is a great deal more to a compliance program. Below we discuss these topics, which include the agreement language, royalty audits, desk audits, and, most importantly, proactive communication between licensor and licensee.

WHAT IS A ROYALTY AUDIT?

The term “audit” is a term of art in the accounting profession that refers to an examination performed under generally accepted accounting principles (GAAP), resulting in an “opinion” on a company’s financial statement, taken as a whole. In contrast, when the term “royalty audit” is used, it refers to an analysis of information, to determine whether a licensee is performing in accordance with a license agreement.

A royalty audit is used to determine whether a licensor is receiving the proper amount of contractual information, and payments, due under a license. If the royalty audit uncovers non-compliance, the auditors then generate a quantification of the unreported sales, and/or units, and outline understated royalties owed to the licensor.