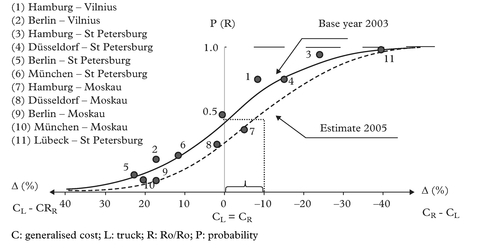 This chapter deals with modal split models and compares the classical binary mode choice approaches with practical decision situations of shifting cargo from road to sea and tries to quantify the qualitative factors influencing the split between modes in addition to pure financial determinants. In a first section the classical modal split models are briefly reviewed, to be followed by two different examples for the application of modal split models on European freight transport problems.

For a long time, the system-immanent disadvantages of inter modal transport including maritime or rail transport compared to direct trucking have not been quantified in monetary terms. There have been only certain tentative estimates available assuming advantages of transport cost of 15–30% in favour of sea transport to be necessary to shift a certain amount of cargo from road to sea or to avoid shifts from sea to road. Among others scientists, the author has dealt with this problem since years.1

The basis of the empirical modal split functions tested in the following is the classical interchange modal split model. This modelling approach was dominated by post-distribution models. The advantage of this procedure is the principle inclusion of the characteristics of the trip and the modes performing it. The first models included only one or two characteristics of the trip, almost vehicle operation cost and travel time. As found by several researchers, a S-shaped curve seemed to represent this kind of behaviour adequately. This hypothesis is shown in the following Figure 1. Empirical tests have shown that the forecasting ability is doubtful due to missing explanatory parameters. Among others such as qualitative factors they ignore a number of policy-sensitive variables. Therefore it seems to be necessary to modify this type of model.2

Since some of the determinants of mode choice are not possible to be quantified and expressed in monetary terms, it seems to be necessary to apply a modal split model which estimates system-immanent disadvantages of inter modal transport compared to pure road haulage.

The ratio of the proportions or transport shares of both modes is equivalent with the probability to choose the one or the other mode. The components of the formula are defined as follows:

Linearisation by using logarithms results in the following formula was used for linear regression: