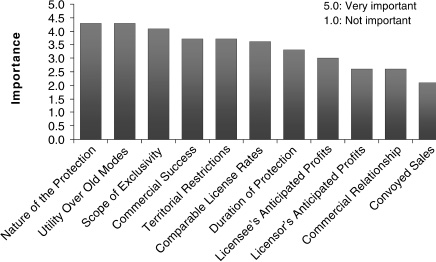 To get an idea of the size of the business of licensing, look at statistics gathered by the IRS. While this data cannot completely capture the entire picture, it can provide a reasonable approximation. The IRS has compiled data showing the total amount of royalty income reported by active companies.1 For 2002, the most recent data available, companies in all the industries covered by the IRS reported a total amount of $115 billion in royalty income. “All Industries” is comprised of the following business categories: agriculture, arts and entertainment, construction, finance, information, insurance, lodging, manufacturing, real estate, remediation, restaurants, retail, support services, transportation, warehousing, and wholesaling.

To get an idea of the revenues associated with this level of licensing, the royalty income (representing payments by licensees) is divided by the most common royalty rate associated with intellectual property (IP) licensing. This royalty rate, which will be discussed at greater length later in this book, is five percent. When the calculation is completed, revenues derived from licensed IP nearly reach an enormous $2.3 trillion. This huge amount does not include revenue generated from licensed IP where no royalty payment is due, such as where companies have cross-licenses allowing each party to use the other’s IP without a royalty payment.

Historical information allows for detecting trends in the business of licensing. The IRS gathered the same royalty income as far back as 1994. In 1994 the total amount of royalty income for all industries was almost $50 billion. In just eight years, the business of licensing has more than doubled. Dividing the $50 billion by the same five percent royalty rate indicates that revenue generated by licensed IP was only $998 billion for 1994.

Technology licensing can be gauged by focusing on industries where licensing would be expected to involve technological innovations, not trademarks and copyrights. Shown below is a table showing royalty income for selected manufacturing industries expected to deal in licensed technology.2

Royalty Income for Selected Manufacturing Industries (in thousands of dollars)

Trademark and copyright licensing can be approximated by focusing on the IRS data compiled for industries where technology is not as often licensed, but where licensing focuses on trademarks and copyrights. For 2002, royalty income totaled $18.7 billion for the accommodations, arts, broadcast, entertainment, internet publishing and services, food, motion pictures, publishing, recordings, and recreation industries. Still, assuming a five percent royalty rate as the basis for the royalty payments, the revenue derived from licensed trademarks and copyrights exceeded $373 billion. While the data does not lie, this level of trademark and copyright-based revenue seems low.

The pharmaceutical industry provides evidence of the reasons behind licensing, which are relatively common for most industries, even though the patented technology of pharmaceuticals and biotechnology companies is unique.

During the past ten years, royalty rates have been pressured upward by several conditions within the pharmaceutical industry:

It takes more than ten years, and several hundred million dollars, to put a new drug on the market.

Pharmaceutical companies are under constant pressure to continually obtain or discover promising compounds.

Internal research and development pipelines are not sufficiently filled with new discoveries and products.

Pharmaceutical companies need to supplement their research and development deficiencies with licensing activities.

Pharmaceutical companies are in heated competition to acquire new molecules and technology from any source.3

A quick history of healthcare starts with the traditional pharmaceutical companies, that became multinational giants by turning chemicals into medical products benefiting millions of people. The chemical-based products were easy to use and very inexpensive to mass-produce. Then came—initially from university labs—products based on genes and organisms. In many ways these new discoveries were superior to chemical-based products, having fewer side effects; but biotechnology therapies were, and still are, costly to make. They were also sometimes difficult to market because they often must be injected or inhaled. Big drug companies largely left biotechnology to the small companies, created by scientists and venture capitalists. Now the big drug companies are in trouble. They are watching their research pipeline shrink while simultaneously seeing some biotech firms successfully commercialize gene and organism-based products.

Ernst and Young, a consulting and accounting firm, reports that biotech firms are more productive than the old guard. Since 2003, biotech firms have submitted more new drug applications to the Food and Drug Administration than have old-line firms.4 In response, the old-line drug companies are shifting their focus and exploring biotechnology. Some are spending more internal research dollars on biotechnology. Some are banking on alliances, product licensing deals, or acquisitions of small biotech firms. Some are pursuing multiple initiatives. Glaxo spent $5.2 billion on internal research and development, but says it expects half its new products to come from outside its organization. Patricia Danson, of the Wharton School at the University of Pennsylvania, says that no firm can rely exclusively on its own research and development.5

Amgen is the world’s largest biotechnology company. Amgen’s chief executive, Kevin Sharer, recently told the Philadelphia Inquirer that his company no longer subscribes to the “not-invented-here” syndrome. An example of this new attitude is Amgen’s recent acquisition of Abgenix for $2.2 billion. The deal will provide Amgen with full rights to the experimental cancer drug Panitumumab, which the companies have been developing together. Real estate, manufacturing facilities, cash, and inventory were never mentioned as anything of importance in this deal. IP was the sole source of value.

Young companies, with promising new technologies and products, are in the driver’s seat, as larger companies clamor around them. Inventors are being approached at earlier stages of development, and with larger offers. Pfizer, signed a $1.9 billion deal with Vicuron. This is the biggest deal ever for a drug in the first phase of regulatory approval.

Industry conditions are also allowing inventors to get more than money. The inventors are getting to structure deals any way they want. Nuvelo announced an agreement to sell rights to its new Alfimeprase, an experimental anti-clotting enzyme, to Bayer HealthCare. Nuvelo will receive up to $385 million, plus royalties of between 15 and 37.5 percent of sales outside the United States. The unique feature of this deal is that Nuvelo will retain U.S. commercialization rights.