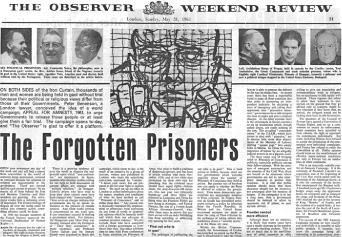 The absolute rights discussed so far do not allow for limitations, exceptions, qualifications, or balancing against other rights. Genocide, crimes against humanity, slavery, and torture are simply international crimes, which are prohibited and can be individually punished by any state wherever the acts were committed. The rights we consider in this chapter may, by contrast, be limited through legal restrictions designed to protect a defined legitimate objective. So, for example, liberty can be restricted in the context of the detention of someone following a lawful conviction in a court of law. Freedom of speech is not absolute. As we all know, shouting ‘fire’ in a crowded theatre can be punished. Although we all should have freedom to receive and impart information, there are obviously legitimate restrictions on passing on commercial or military secrets. Photographs of celebrities may be of interest to a wide readership but their publication may be restricted in order to protect an individual’s privacy.

Is it meaningful then to talk about ‘rights’ in such contexts? You have the right not be detained – until the authorities justify your detention. You have the right to publish – but not if it upsets others. We seem to be merely giving with one hand and taking away with the other. However, the human rights framework applies and is useful. The human rights approach starts from a presumption that we all have rights to liberty, freedom of expression, belief, assembly, association, property, and fair trial. Any restriction on these rights has to be justified as proportionate to the aims pursued by the restriction according to a three-stage schema developed in human rights law (we examine this schema in the next section). The restriction on our freedoms need not be sinister or nefarious. Few contest the need for certain convicted criminals to be deprived of their liberty; introducing human rights in this context enables us to see how we have to start from the presumption that the individual is entitled to liberty unless a fair procedure demonstrates the necessity of incarceration.

Let us start with the right to life and return to freedom from incarceration at the end of this chapter. The right to life would seem at first glance to be absolute, but on closer inspection, it is clear that some deliberate acts which result in the loss of life are not necessarily human rights violations. A police officer, confronted by an armed assailant, may have to shoot in self-defence to save his or her own life or the lives of others. The cases become harder when the danger becomes less imminent. What if a state engages in the targeted assassination of suspected terrorists? Human rights courts have been faced with dozens of complaints that the security forces have used excessive force which was unnecessary in the circumstances. As a general rule, the force used has to be ‘proportionate’ to the danger to be averted. The UN Basic Principles on the Use of Force and Firearms by Law Enforcement Officials states that:

Law enforcement officials shall not use firearms against persons except in self-defence or defence of others against the imminent threat of death or serious injury, to prevent the perpetration of a particularly serious crime involving grave threat to life, to arrest a person presenting such a danger and resisting their authority, or to prevent his or her escape, and only when less extreme means are insufficient to achieve these objectives. In any event, intentional lethal use of firearms may only be made when strictly unavoidable in order to protect life.

This simple rule is under threat as governments seek to shift the discussion from the context of principles appropriate for a hostage situation, to the realm of anticipatory self-defence to prevent attacks on the nation. It may be helpful here to separate out three proportionality rules which tend to get confused. The first two rules do not authorize limitations on individual freedom – rather they restrict what states may do when they resort to military force.

The second rule concerns what is increasingly known as ‘collateral damage’. It is part of the framework designed to protect the right to life. The law of armed conflict prohibits indiscriminate attacks on civilians. In particular, there is a prohibition on launching an attack which may be expected to cause incidental loss of civilian life which would be excessive in relation to the concrete and direct military advantage anticipated. In other words, the rule demands that the civilian damage has to be proportionate to the military advantage. At a certain point, the collateral damage becomes disproportionate to the military advantage and hence illegal. Those who violate this rule may be tried as war criminals. Examples of prosecutions for violations of this rule are hard to find; we can, however, highlight that the shelling of Sarajevo was successfully prosecuted at the International Criminal Tribunal for the former Yugoslavia. Prosecutor Louise Arbour charged General Galić with a count of attacks against civilians, and he was eventually convicted in 2003 of the war crime of spreading terror among the civilian population as well as crimes against humanity. He was sentenced to 20 years’ imprisonment.