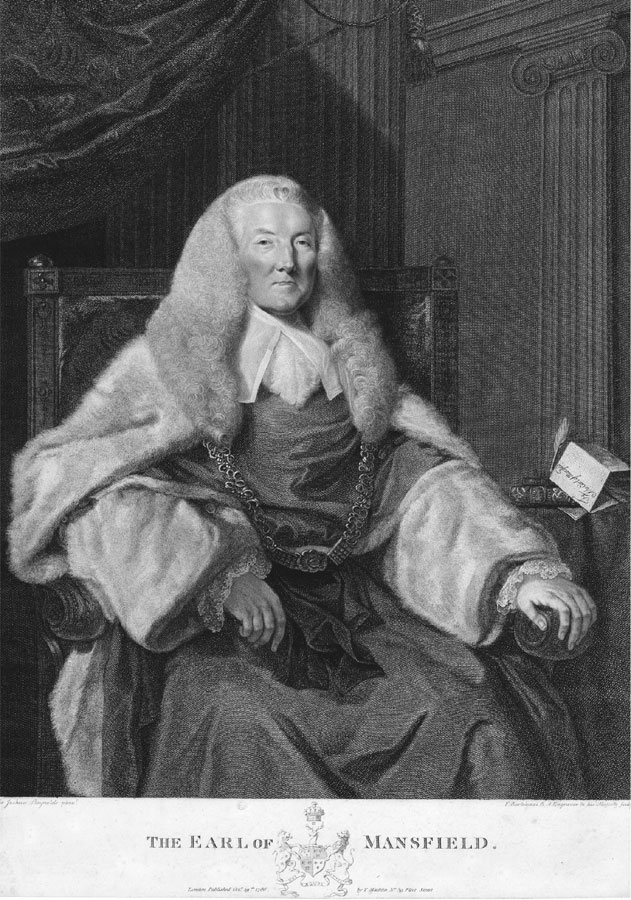 The Purity of England’s Air

The constitution is pervaded by the rule of law on the ground that the general principles of the constitution (as for example the right to personal liberty, or the right of public meeting) are with us the result of judicial decisions determining the rights of private persons in particular cases brought before the courts.

A. V. Dicey, Lectures introductory to the Study of the Law

ON Thursday 28 November 1771, a ship called the Ann and Mary was moored in the Thames ready to leave for the West Indies with its cargo. That cargo had a name that would reverberate in English legal history for the case that bore it and for the ruling that concluded that case, known simply to posterity as the Mansfield Judgment.

The cargo had been a domestic slave and had been given the name James Somerset by his white owner, a Virginia trader aptly called Charles Stuart. Stuart came over to England and of course, along with a lot of other items of domestic property, brought his slave with him. He was a valuable piece of property worth some £50. Somerset managed to escape and lose himself among the several thousand blacks who already lived in London. Slave catchers, however, were put on his track and he was captured, shackled and put on board the Ann and Mary to be taken to Jamaica and sold into plantation work. This was not done in secret, the law was not being evaded. An owner had lost his property, given a reward for it being found, and now wanted to dispose of it at his will, as he would have done of a lost ring or a pig that had escaped its enclosure.

Enter the veteran anti-slavery activist and autodidact, Granville Sharp. Sharp may have been a lowly ordnance clerk at the Tower, living modestly in Old Jewry, but he was no ordinary one. He had taught himself, among other things, Hebrew, and was an accomplished polemicist against what he considered the outrageous, unchristian commerce in slaves. Many years before he had first got involved in anti-slavery activities when he was asked by his brother William, to bring a ‘nearly blind and doubly lame’ escaped slave called Jonathan Strong to St Bartholomew’s Hospital. Strong had been hit so hard around the head with a pistol that the butt had separated from the stock. Sharp was outraged that any man could be so treated with legal impunity. Over the subsequent years he had taken on several cases involving slaves, but none proved quite the one to challenge their legal status in England. This matter of Somerset might just fit the bill and answer the question: though Britons might never be slaves, could slaves exist in Britain?

Sharp knew he had no time to lose. He secured a writ of habeas corpus from the King’s Bench and rushed it aboard the Ann and Mary. The captain, confronted by the writ, could not disobey and Somerset, at least temporarily, was handed over to the court. The matter came before William Murray, Lord Mansfield himself, the premier judge of England. Mansfield was more than that. He is, alongside Coke, the most important and transformative jurist in English legal history. He was, of course, Scottish. Sharp, however, had reservations about this pillar of the establishment and seriously underestimated the man he thought ‘deplorable of heart’. Mansfield had been Attorney-General in the Commons and Speaker in the Lords, disapproved of Wilkes and his liberties, and, despite coming from a Jacobite family, was an ardent unionist.1 He was also the founder of modern English commercial law and a prime advocate of free trade. Was he the judge to endanger this, the very life blood of England?

Mansfield, however, had an extraordinary and independent mind. He had courage, was fair, had an instinct for justice and also a staunch Enlightenment belief that positive laws should derive from natural law and be based on common sense, morality and reason. He had a high regard for equitable principles, which he had imbibed from observing Lord Hardwicke, and in his own judgments he had introduced them into the common law. Precedents should be signposts, not manacles. Convenience, neither personal nor national, should ever be the sole determinative of judicial findings. He had previously declared on the issue of Wilkes’s outlawry that the Constitution did not permit reasons of state to influence the judgment of the courts:

God forbid it should! We must not regard political consequences, howsoever formidable they might be: if rebellion was the certain consequence, we are bound to say ‘fiat justicia, ruat coelum’ [let justice be done though the heavens fall].2

He also had a most unusual domestic set up. His nephew John Lindsay, a naval captain, had had an affair with a woman, probably a slave, found aboard a Spanish vessel he had captured. The product of this liaison was an illegitimate daughter, Dido Belle. She became like a daughter to her great-uncle, Lord Mansfield. He adored her. She lived with him, was a beneficiary of his will, and is seen in a portrait alongside his legitimate grand-niece. This was surprising enough in eighteenth-century England, but what was even more surprising was that Dido was black. To what extent this personal circumstance affected the great man’s thinking we can never know, but it must have had some impact.

Both sides were well represented. Serjeant Glynn, the learned libertarian and Wilkes’s old champion, was one of those chosen by Sharp. Somerset’s barristers argued that as there was no law legalising slavery in this country, it must be illegal. The slaver’s counsel countered by submitting that as contracts for the sale of slaves were valid under English law, that must validate slavery in England.

Somerset’s case was not the first on the question of whether slaves were property, and as such could be bought and sold and conveyed anywhere the owner wished, just as cattle could, or whether blacks in England had the same legal rights as the native born. There was another argument based not on contracts for sale but on confession of faith. In 1609 Edward Coke himself had said that as perpetual enemies of Christians, infidels could be perpetually imprisoned. But what if the infidel converted? No longer an alien infidel, but a fellow Christian?

The first recorded slavery case was that of Butts v. Penny heard in the Court of the King’s Bench in 1677.3 The judges allowed a master to sue in trover for the loss of a black slave. Trover was a common law form of action to recover the value of goods or chattels by reason of an alleged unlawful interference with possessory rights. Consequently the judges thought a black slave was his master’s property. The reason for this was that commercial custom permitted the buying and selling of blacks as ‘merchandise’. However, the Attorney-General asked the court to postpone final judgment to the following term. It was never resurrected. There the issue rested until 1694, when in Gelly v. Cleve compensation was granted for the loss of a slave. It was ‘adjudged that trover will lie for a negro boy; for they are heathens, and therefore a man may have property in them’.

Three years later Chamberline v. Harvey4 came before Chief Justice Holt. A black litigant argued that slavery could not exist in England because it violated the law of nature, the common law had a presumption in favour of liberty, and a slave ‘being baptised according to the rite of the Church, is thereby made Christian, and Christianity is inconsistent with slavery’. His master, citing Butts v. Penny, argued that it could not be denied that ‘trover would lie for the negro’, Christian or no. ‘Who would squeeze the sugar from the cane once all slaves had been sprinkled with holy water?’ Holt, however, denied that trover would lie for ‘the taking of a negro’, no matter what Butts said, nor would an action for trespass, because both actions were available only to owners of chattels and blacks were not ownable. The black was not a slave but a ‘slavish servant’, akin to an apprentice. The master might recover the servant’s lost services but not the servant himself.

The matter came before Holt again in 1701 in the case of Smith v. Brown and Cooper.5 Smith sued for non-payment for a slave sold in Cheapside, but the Chief Justice held that ‘As soon as a negro comes into England, he becomes free. One may be a villein in England but not a slave.’ Under the law of Virginia blacks may be saleable, but not in English law. His fellow judge, Mr Justice Powell, went further in distinguishing a negro from a villein: ‘the law takes no notice of a negro’ and ‘a black was to be treated as an Englishman’.

Tags:  Law, Liberty and the Constitution