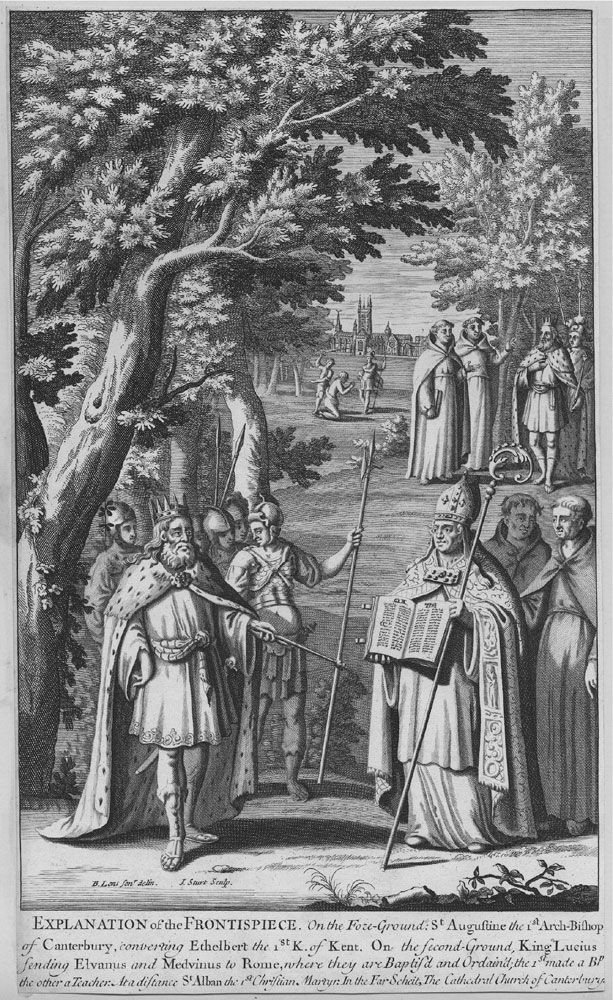 The Promulgation of the Law in Anglo-Saxon England

Christian men are not to be condemned to death for altogether too little; but otherwise one is to devise lenient punishments for the people’s benefit, and not ruin for little God’s handiwork, and his own merchandise, that he so dearly bought.

Revenge is a kind of wild justice, which, the more Man’s nature runs to, the more ought law to weed it out.

THE Angles and Saxons were invaders of the land later called England who fought, conquered and stayed, as the Romans had done before, and the Vikings and the Normans would do after. They migrated from Germany in the fifth and sixth centuries and established a number of kingdoms, most notably Kent, Wessex, East Anglia and Mercia. Anglo-Saxon law, which took root in England, has often been portrayed as part of the history of this receding Germanic past almost unchanging in the five hundred years from the code of Aethelbert to the laws of Henry I, and as the province not of royal power but of popular liberties.1 This is fallacious in at least two respects.

Certainly the law that prevailed in England immediately before the Norman Conquest owed little if anything to the Celts or Romans. Older Anglo-Saxon codes, especially those of Kent and Wessex, owed much to their Germanic inheritance. From their inception, however, they did not stagnate but began to grow, and other influences – notably Scandinavian – began to impinge on, or infiltrate, the legal landscape.

Secondly, royal involvement was crucial in the development of Anglo-Saxon codes. English law and its universality sprang not primarily from the field and the hearth, but largely from the power and reach of its early Christian kings. Its vitality survived their deposition; it did not succumb to the so-called ‘Norman Yoke’. It was instead nurtured by the successors of the Anglo-Saxons. The common law was eventually hammered into shape and erected into a national structure by an Angevin king, but the components he used had been forged by his pre-Norman predecessors. They were made to last.

Over the centuries, the Anglo-Saxon kings produced numerous bodies of laws – or ‘dooms’ as they were called – almost exclusively to do with criminal law and procedure. In the early codes tariffs of fines are predominant, while in the later ones, with royal influence in the ascendancy, this compensation culture is superseded by dispossession, outlawry, and corporal and capital punishment. As the centuries pass the penalties become ever more severe.

The earliest extant code comes from the reign of King Aethelbert of Kent and was issued probably between 597 and 602.2 Traditional laws stemming back to Germanic roots already existed but were transmitted orally. This was no problem in a small fledgling kingdom. Aethelbert, however, had ambitions. He likely attained the status of Bretwalda (overlord), and his influence extended beyond his own kingdom, as far north as the Humber. He had imperial ambitions ‘over the southern territories’.3 The maintenance of law and order was a predominant duty of any king, and fixed money payments could undermine the prime source of disorder: the feud. There was another incentive for regal involvement however: the enforcement of the law was a major source of royal revenue.

It is no coincidence that Aethelbert set down his code shortly after Augustine arrived in Canterbury, and converted him to Christianity. The missionaries brought ‘law with them in a stronger form than the Anglo-Saxons recognised’.4Augustine was an emissary of Latin Christianity. He came from Rome where lawmaking and law codes had a long and distinguished history, and he brought the Bible which begins with the Mosaic laws, extols the forensic wisdom of Solomon and the advocacy of Jesus, and ends with the Last Judgment. Conversion brought Aethelbert within this double tradition. As the first Christian Anglo-Saxon monarch he may have wanted to symbolise his acceptance into this world, and immortalise his renown, by aping the legislative endeavours of his most eminent European predecessors, Clovis and Justinian.5 According to the Venerable Bede, Aethelbert created a written code of laws iuxta exempla Romanorum – ‘after the examples of the Romans’. It may be that the use of the plural – exempla – implies that Bede had in mind contemporary Frankish ‘exemplars, the actual law-codes of still more or less recognisably “Roman” regimes’.6 Whatever the precise meaning of Bede’s elliptic phrase it is clear that Aethelbert’s contact with the traditions of Rome and its heirs inspired emulation, and the code was the result. It was a joint act of Church and state. Augustine, indeed, may well have had the dominant hand in drafting it, which would explain why the first seven clauses deal with compensating the Church. 1. Aethelbert and Augustine: Church and state at one in the creation of the first English law code.

Law-giving as well as law enforcement was a royal function for a Christian king. In Aethelbert’s reign, and thereafter, the Church sought to infuse royal legislation with Christian principles. Since archbishops drafted much of it, this infusion was secured. Lawmaking had royal and divine imprimatur: ‘these are the dooms which King Aethelbert set in Augustine’s time’ is how the code begins, and, although this rubric is later than the code itself, it rightly encapsulates the congruence of Church and state. The code probably did not innovate, but encased old laws ‘in a new legislative frame’. By causing them to be written down the king made them his own.7

The medium in which Aethelbert had his code promulgated was distinctive, even eccentric. Unlike his continental precursors, he did so not in the lingua franca and the traditional language of law – Latin – but in the local tongue: the Anglo-Saxon, the Old English, of his subjects. Why he did so is not obvious.8 Aethelbert’s is not merely the first law code in English, but is the oldest extant English document written in the vernacular. There is something rather appropriate that the earliest English law was accessible to everyone, for the role of laypeople, most importantly as jurors, has been a defining characteristic of the English legal system.

Emulation of the Roman way of creating law codes was a major inspiration for Aethelbert’s creation, but the actual text is singularly free from the influence of Roman legislation. Instead, the influence was German. Nor were the contents of the code innovative. It looked back to traditional customs, did not constitute general legislation, and was concerned almost entirely with safeguarding the Church and establishing stability within the realm by the setting of pecuniary penalties for criminal offences. This emphasis may again reflect the influence of the Church. Establishing a legitimate alternative to feud and reprisal was ‘one of the goals of the Church at the time’.9 Pope Gregory, who had dispatched Augustine in the first place, had a far more charitable approach to crimes such as theft from churches than Roman law had, or later Anglo-Saxon laws would come to have. He distinguished between those who stole from greed and those who took from need, and believed that different penalties should reflect different circumstances and different intent. Charity was to monitor correction. Restitution should be the hallmark of justice, rather than retribution or reprisal.10 This is an early expression of what we would call ‘restorative justice’. It is no coincidence that in Aethelbert’s code it is bote – compensation paid, or restitution made, for injuries – that predominates.

Not only did every person have financial worth which varied according to status – from king to slave – but every part of them did too, from big toes to testicles. The loss of a big toe cost ten shillings, while severing a foot cost fifty, no mean sum as a shilling was the price of an ox in Kent.11 The penalty for ‘damaging the kindling limb’ – the genital organ or penis – was set at three ‘person prices’ or 300 shillings, much more than for any other injury.12 A person price – leodgeld – was a price paid for a life; killing a royal official, for instance, merited merely one person price.13 The fact that in this instance the injured party got thrice that amount was to compensate not merely for the injury and insult to his manhood but for the children he would not be able to sire, the generation he could not ‘kindle’. For a snip to the scrotum, falling short of emasculation, a mere six shillings would suffice. Even the least disfigurement merited three shillings.14 Pulling someone’s hair was cheapest of all, costing only fifty sceattas in restitution.15 The layout of the code, with the injuries listed from the crown of the head to the toes of the feet, making them easier to remember, suggests an oral precursor. Aethelbert was putting in writing the ancient custom of his people, so that from then on there could be no dispute as to the amount to be paid, either in full, or by barter.

The victim and his family were the enforcers, not yet the king. Disputes could be sorted out ‘by the book’. A culture of compensation had much to commend it: in a society where everyone carried staves, knives, or just farming implements, quarrels could easily lead to blows, and blows to death. Killing the killer could merely make matters worse, causing feuds to proliferate. Being able to settle a dispute, or draw a line under a grievance, was therefore crucial in the early Anglo-Saxon era when the greatest threat to the social fabric came not from external enemies but from internal feuding. The king – and the Church – had no prospect of banning blood feuds, but also no desire to stir them up. Regulation with compensation was the appropriate way to limit and constrain this routine means of restoring the status quo. Nor did Aethelbert wish to deprive the community of the labour or military service of able young men by hanging large numbers of them. He had few enough subjects as it was. Fines, in addition to compensating the loser or the family of the victim and helping maintain the peace of the realm, also benefited the royal coffers. A law code such as this was thus invaluable to an ambitious Christian king.

Later in the seventh century, Kings Hlothhere, Eadric and Wihtred in Kent, and, in the eighth, Offa in Mercia, enacted their own codes, suffused with Christianity, which protected the Church and enforced its precepts, and also punished crime.16 To the Anglo-Saxon mind, as to many others, neglect of God and the commission of crime were linked. Lawlessness was to be restrained, and self-help in the form of feuds discouraged. This was royal fiat. It was the king who laid down the law: ‘the demand for due process came initially not from the subject but the ruler. It is the voice of organised authority.’17

From the first, however, the king did not act alone, nor did he act arbitrarily. Aethelbert, Bede relates, sought ‘the consent of his councillors’.18 Wihtred specifically convened a ‘consiliary assembly of great men’, including Brihtwold, ‘archbishop of Britain’, and Gefmund, bishop of Rochester. At this assembly, ‘with the consent of all, the leading men devised these decrees and added them to the lawful usages of the Kentish people’.19 In lawmaking, therefore, the kings were consulting counsellors, consolidating customs, and at most adding ‘to the law which their forefathers had made’.20 They were improving on the past, rather than imposing novelties on their people; amending rather than innovating. This was conservation and adaptation. It was not revolution.

Increasing royal involvement in the administration of justice resulted in an increasing severity of punishments. Serious crimes could be deemed boteless

Tags:  Law, Liberty and the Constitution