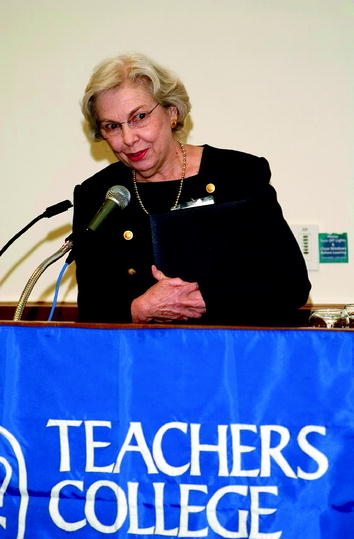 With Janet Gerson and Tony Jenkins in the DMZ-Korea, during IIPE 2003. Source Personal photo collection of the author

Considering the distinctions I perceive between the largely content-based general practice of human rights education and human rights learning that puts equal emphasis on an engaged pedagogy, provides an arena of discourse on the purposes and processes of social education in general and peace education in particular. We need to enter this arena to grapple with the limits to learning inherent in the information transfer form of education as an obstacle to the ultimate social purpose of peace education, transformation toward a culture of peace through the de-legitimization of violence as a political tool and the development of a social commitment to nonviolent societies, striving to realize universal human dignity in institutions, relationships, and customs. The separations and limits of traditional pedagogies imposed by the fragmentation and reductionism of divided subject matter are characteristic of the “political realism” that still dominates current politics-including issues of human rights and peace. The rationalization and tolerance of various forms of economic and political violence as unavoidable in the face of concerns deemed more significant to order and stability is a given in public discourse. In the names of more urgent public priorities such as national security, human rights fall by the policy wayside. Issues continue to be discussed and decisions made without regard to the essential interrelationships among them. So, too, the ethical and normative dimensions and consequences of public policies are screened out in favor of what is argued to be pragmatism and practicality. Neither do ethical dimensions play much of a role in standard information based education…

This proposition is… not necessarily new, but I believe it has renewed currency in 2009, the International Year of Human Rights Learning. The basic argument is a call for the fulfillment of the Freirean promise of education as a means to the realization of human rights through that form of human rights learning defined as conscientization-awakening to awareness of the realities of our lives and societies and the interrelationship between these two realms of human experience. It is exactly Freire’s focus on the capacity of the inner dynamic of the learning process to illuminate the outer social and political structures that forms the essence of human rights learning as advocated by… the communally based approaches to learning… [that acknowledge] the political nature and purpose of peace education. By political I do not mean the politics of existing political systems, nor the contentions among the categories of political positions ossified into political parties, reifying the dualistic thinking that in the American system plays out in a two-party politics. I mean rather politics in a more profound and basic sense of public deliberation on the aims and purposes of society; the decisions about means to achieve those purposes by sustainably producing and fairly expending the fruits of a peoples’ labors, resources and talents. I mean a politics of peace infused with a common commitment to the general public good, a just distribution and equitable enjoyment of benefits and resources; in short a politics of human rights. This is a politics far from the present power contestations of political realism, the win-lose process that obscures and poses obstacles to the learning required to devise and develop a politics of peace. Without an effective politics of peace, peace cannot be achieved. Without an effective political education there can be no politics of peace. I would submit that human rights learning is the most promising vehicle for an effective education for a politics of peace. For it has been devised through such a politics in the places where it has been put into practice as grass roots activism for community change…

11.3 Proposition 3: The Violence and Vulnerabilities of the Global System Frame Ethical Issues for Human Rights Learning and a Politics of Peace

What Freire confronted as oppression of the poor, I would identify as a symptom of a system of social and economic violence, similar to, but not synonymous with what peace research refers to as structural violence. It seems to me that the concept of structural violence is a general abstraction that can obscure the ethical and moral dimension and the individual personal responsibility at play in of this category of violence.
Granted, it is accepted that social and economic structures restrict the opportunities for human fulfillment and access to social benefits available to the poor, and the concept of structural violence enables us to discern the institutional and political causes of, and possible alternatives to, these unjust conditions. However, the degree to which personal behaviors and choices conditioned by social values determine the actual processes of deprivation within the structures call for normative reflection that makes ethics and values a significant factor in peace learning and peace politics. Justice and injustice may be mediated through structures but they are not synonymous with nor necessarily determined by structures. Indeed, I would argue that peace and human rights learning and action are not only often inspired by unjust structures, but that they can take place within them. It is this fact that makes peace education possible within our present politics and education systems. It also makes it incumbent upon peace education, especially when it takes the form of human rights learning to pose issues and develop skills for the exercise and application of ethics and morality.
Both ethics and morality may have a place in peace learning and peace politics, but their respective places are distinct and different. They are not synonymous and cannot substitute one for the other. It is not the role of peace education or human rights learning to moralize, that is to teach by moral precept. But they have a responsibility to guide learners in discerning when moralizing is introduced into political discourse as it was so frequently in the last American administration-most lamentably in the case of depicting the war against Iraq as a crusade and the shocking and frightening habit of the then Secretary of Defense of introducing strategic directives with Biblical quotations. In addition to being an egregious violation of the constitutional requirement of separation of church (meaning for legal and political purposes all religions) and state, the habit was a prejudgment on public matters of national security that denied the citizens the right to form and argue for their own positions. Ethical reflection and analysis, on the other hand should be an integral component of peace learning and peace politics. The development of ethical skills can derive from applying global society’s agreed principles of justice and equity-such as those that are enshrined in law, pertaining to all no matter what moral system they may live by—to the assessment of political issues and choices. The development and application of ethical principles is a process of engagement similar to my sculpting in clay metaphor. It is a peace education and human rights learning process consistent with Freirean pedagogy…

Tags:  A Pioneer in Education for Peace and Human Rights