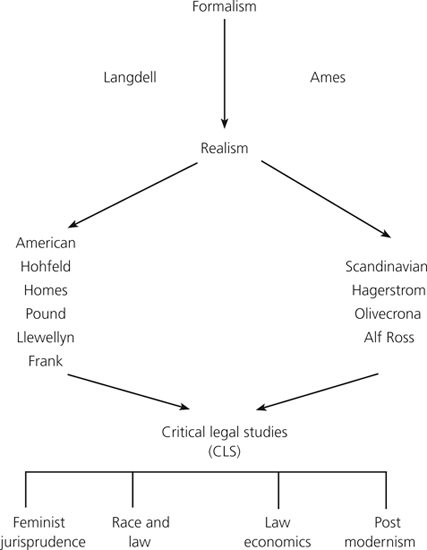 1.  Christopher Columbus Langdell (1826–1906) was initially a law practitioner and later appointed as first Dean of the Harvard Law School.

2.  He was the author of the first student casebook selection Cases on the Law of Contracts (1870), the main bases of his approach to the theory of law teaching being that:

(a)  law should be accorded the same approach and have a similar status to science (bearing in mind the importance of science in the 19th century), the law library becoming the law student’s laboratory

(b)  the purpose of studying legal theory is to identify the basic organising structure of the law, whether conceptually or in the form of principles

(c)  the case study method of law teaching and learning is more useful than reading numerous cases or compiling notes of rules from lectures and text books, but case studies were combined with the question and answer Socratic teaching method, rigorously applied to ensure adequate student preparation

(d)  legal principles could be derived from concentrated attention to relevant appellate case law, the equivalent of studying scientific specimens in the laboratory.

1.  James Barr Ames (1846–1910) succeeded Langdell as Dean of Harvard Law School in 1895 and further developed the American case study method, which replaced the previous American Columbia University (Professor) Dwight method, which had entailed a combination of:

2.  That system was supplemented by students reading texts followed by oral testing for memory in class.

3.  Case methodology expanded from its 1870 introduction in law studies and is now used in other fields such as business and medicine:

(a)  it involves reading the original (case) source materials (for law) and extracting conclusions from them;

(b)  by this approach students master legal principles and doctrines, the important point being that students who are going to practise law need to learn diagnosis, decision-making and judgement to put themselves in a position to be able to implement consequential practical action.

4.  Formalism was an important and perhaps dominant legal study methodology in the late 19th and early 20th centuries, although other influences (realism and sociological) came into fashion at about the same time or shortly thereafter.

5.  The formalist methodology was a kind of inductive empiricism, knowledge and understanding being learnt by detailed study of original sources, developing the ability to apply that knowledge in a practical way; and in its contemporary form remains the dominant American approach to legal learning.

6.  Modern versions emphasise difficult and contradictory cases, which might appear to bring into question aspects of Langdell’s theory, but the essential methodology remains the same, the current view being not that conflicting decisions were wrongly decided, but that they require more concentrated analysis.

1.  Legal realism, taking on board some of these pragmatic ideas, challenged a number of previously held beliefs, especially of American common law, including the ability of ordinary people to choose the laws by which they would be governed.

2.  Legal realists wanted to replace the existing system of legal thought in the United States, (formalism section 9.1) and mechanical jurisprudence), the general thrust of which had been to give power to business corporations at the expense of workers and consumers.

3.  There were several things that needed to be addressed in order to clear the ground and apply the realistic approach:

(a)  removal of muddled ideas that grew out of natural law theory (e.g. the ‘right to life or liberty’ is readily sacrificed by states the moment their more pressing interests come into question, as by threats of terrorism or war)

(b)  making a clear distinction between law and morality (in researching legal problems the likely result is what is being sought, not the rights or wrongs attributable to the consequences)

(c)  understanding the relationship of law and logic (Holmes says in The Common Law (1881) that the life of the law has not been logic, but has been made and influenced by current morals, politics and public policy).

4.  Some of the characteristics of legal realism include:

(a)  the need for legal language to be clear and unambiguous

(b)  necessity for social reform

(d)  concern with the psychological and ideological motivations of judges

(e)  preoccupation with the validity and methodology of judicial process

(f)  the idea that law is the prophecy of what the courts will do in fact, rather than a consideration of naturalist concerns with principles and morality, i.e. realism means practical predictive jurisprudence.

5.  It therefore involves acceptance of several fundamental notions as to the nature of law, i.e. that it is:

(b)  interdisciplinary, as realists argue that other elements or disciplines need to be drawn into the practice of law, such as sociology (Pound section 8.2) or psychology (Frank section 9.2.6)

(c)  instrumental because it should be used as a means of attaining social purposes and achieving social engineering.

9.2.2 Relationship to other Theories

2.  By ‘empirical’ it is meant that realists seek to describe how judges actually decide cases, as opposed to attempting to construct a theoretical conceptual framework of how the law might be construed.

4.  Legal realism thus by implication denies some of the previously held beliefs both of natural law and legal positivism.

5.  The local indeterminacy thesis is the proposition that for appellate decisions to be reached there is often insufficient existing law available.

6.  The discretion thesis allows judges to make new law when adjudicating upon cases, the ruling factor in reaching such decisions being political and moral opinion more than law (but with the whole process resulting in new law).

7.  Realism relies on and does not contradict legal positivism, but places emphasis on the social and psychological attitudes of the judiciary.