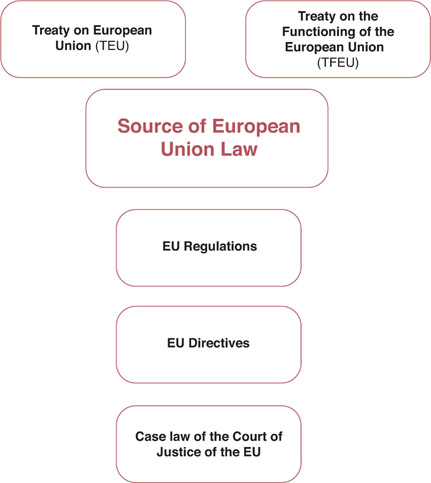 6.1 The origins and development of EU law

6.1.1 The European Economic Community came into being with the Treaty of Rome (1957), which established the foundations for a new level of European co-operation on issues of economic and social development. Initially there were six Member States. The UK joined in 1973 and at present there are 28 Member States.

6.1.2 As the European Union itself has noted, the ‘EU was not always as big as it is today. When European countries started to cooperate economically in 1951, only Belgium, Germany, France, Italy, Luxembourg and The Netherlands participated… The union reached its current size of 28 member countries with the accession of Croatia on 1 July 2013.’

6.2.1 The Single European Act, the Treaty on European Union (Maastricht Treaty, TEU), the Treaty of Amsterdam and the Treaty of Nice provided for further integration in relation to economic, monetary and social policy.

6.2.2 The Treaty Establishing a Constitution for Europe was signed in Rome in 2004. However, to come into effect, each Treaty requires ratification in each of the Member States under their constitutional requirements. In some States this requires a positive vote in a national referendum – the French and Dutch ‘No’ votes in 2005 suspended this treaty.

6.2.3 The revised Treaty of Lisbon (ToL) was signed in December 2007. The Treaty was due to be ratified by the summer of 2008 but a ‘No’ vote in the Irish referendum delayed this. In Ireland the referendum was held again in 2009 – a compromise reached between the Council and the Irish Government, part of which was agreement not to reduce the size of the Commission. The result was a ‘Yes’ vote.

6.2.5 The primary changes introduced by the coming into force of the ToL were designed to:

6.2.6 The objectives of the European Union include (Article 3 TEU):

6.3 Institutions within the European Union

6.3.1 The European Council was created in 1974 with the intention of establishing an informal forum for discussion between Heads of State or Government. It rapidly developed into the body which fixed goals for the Union and set the course for achieving them, in all fields of EU activity, for example, introduction of the euro.

6.3.2 The European Council acquired some formal status in the 1992 TEU, which defined its function as providing the impetus and general political guidelines for the Union’s development. On 1 December 2009, with the entry into force of the ToL, it became a formally recognised institution of the European Union.

6.3.3 It consists of the Heads of State or Government of the Member States, together with its President (a new post created by the ToL that is elected for a two-and-a-half-year term) and the President of the Commission.

The Council of the European Union

6.3.4 The Council is attended by a Government representative of each Member State, who must be ‘at ministerial level’ and authorised to commit the Government of that Member State (Article 263 TFEU).

6.3.5 The Council is the principal decision-making body of the Union, where on most matters a decision is made by qualified majority voting on a weighted basis. Each State has a set number of votes based on its population size.

6.3.7 The Commission is the driving force behind Union policy and proposes policies and presents drafts of legislation to the Council.

6.3.8 The Commission is also the ‘guardian’ or ‘watchdog’ of the Treaties and ensures that the law is enforced and measures are implemented by the Member States. To this end it has the ability to enforce the law against a Member State in the European Court of Justice under Article 258 TFEU.

6.3.9 Members of the European Parliament (MEPs) are elected by the citizens of the Member States every five years. The Parliament is therefore the only directly elected institution within the European Union.

6.3.10 Over the years, the Parliament has seen a greater role in the decision-making process, with the introduction of new methods of creating legislation, such as co-decision and co-operation.

6.3.11 The Parliament also has the authority to dismiss the Commission; has some control over the EU’s budget; and appoints an Ombudsman to receive complaints of maladministration by Union institutions (this does not extend to national institutions).

6.4 The Court of Justice of the European Union

6.4.1 The function of the Court (often referred to as the European Court of Justice, or ECJ, as well as the ‘CJEU’) is to ensure that in the interpretation and application of the Treaty the law is observed.

6.4.2 It hears cases brought by the institutions, Member States and individuals through the preliminary reference procedure under Article 267 TFEU.

6.4.3 Article 267 provides that domestic courts must refer questions of EU law to the Court where the national court is the final court of appeal in the case at hand. A lower court may refer such a question for a preliminary ruling/reference.

6.4.4 A preliminary ruling should be sought where the court cannot otherwise reach a decision on the issue, which itself must be central to the case (Bulmer v Bollinger (1974));

6.4.5 The purpose of Article 267 is to ensure uniform interpretation of EU law across all Member States (CILFIT S & I v Ministro della Sanita (1982)), a necessary prerequisite for the supremacy of EU law over national law.

6.4.6 The Court is assisted by the General Court, created by the Single European Act 1986 (and previously known as the Court of First Instance). It currently has limited jurisdiction and hence does not hear preliminary references.

6.5.1 Treaties form the primary source of EU law. The Treaties are directly applicable in that they are automatically incorporated into national law. In the United Kingdom this is achieved under section 2(1) of the European Communities Act 1972, which states that all Treaties are ‘without further enactment to be given legal effect or used in the United Kingdom’.

6.5.2 In addition, the Treaties may have direct effect. This means that they are capable of creating rights that an individual may enforce in their own national courts.

6.5.3 In order to have direct effect, a provision must be clear and precise, unconditional and non-dependent, according to the case of Van Gend en Loos (1963).

6.5.5 Regulations are a form of secondary legislation. They are also binding without further enactment, known as direct applicability, which gives Regulations the effect of being ‘binding in every respect’ and automatically part of the legal system of every Member State (Article 288 TFEU). Member States must therefore enforce Regulations (Commission v UK: Re Tachographs (1979)).

6.5.6 Regulations, by their very nature, are capable of having both vertical and horizontal direct effect (Leonesio v Ministero dell’Agricoltura (1972)).

6.5.7 Directives are binding as to the result to be achieved by the implementing Member State. However, they require the State to choose the ‘form and means’ by which they will be implemented: Article 288 TFEU.

6.5.8 Directives are issued to Member States with a time limit for such implementation to occur.

6.5.9 If the Directive has not been implemented by the deadline, as long as it is clear and unconditional, it may acquire vertical direct effect, according to the case of Marshall v Southampton and South West Hampshire Area Health Authority (1986).

6.5.10 However, unimplemented Directives are not capable of having horizontal direct effect, which means that they cannot be relied on against a private body or an individual (Marshall and Dori v Recreb Srl (1994)). This is unless the unimplemented Directive, and the specific provision at issue, is tantamount to some manifestation of a general principle of EU law, stemming from an EU Treaty, Regulation etc. See Mangold v Helm (2005).

6.5.11 Where a Directive has not been implemented by its deadline, an individual who can satisfy the following multi-part test may be able to sue the State for damages suffered as a result of the non-implementation:

6.5.12 If damage is caused by a Directive that has been incorrectly implemented, the breach must be ‘manifest and serious’ (R v HM Treasury, ex parte BT plc (1996)). This latter principle applies to all other breaches of Community law (Brasserie du Pêcheur v Federal Republic of Germany; joined with R v Secretary of State for Transport, ex parte Factortame (1996)).