Increasing energy demand has been identified as one of the key contributors to global warming (UNEP, 2003). Energy efficiency in buildings is emerging as one of the mitigating factors of climate change. In the context of buildings, energy efficiency is defined as the ability to provide the required internal environment and services with minimum energy use in a cost-effective and environmental friendly manner (CIBSE, 2004). While defining energy efficiency, it is imperative that it must be distinguished from energy intensity. It must be remembered that energy intensity is the ratio of energy consumption to some measure of demand for energy services and remains preferable as an indicator for energy efficiency (EIA, 2000).The key attributes considered as a prerequisite to energy efficiency are reduction in energy output, maximization of work output and overall cost reduction. 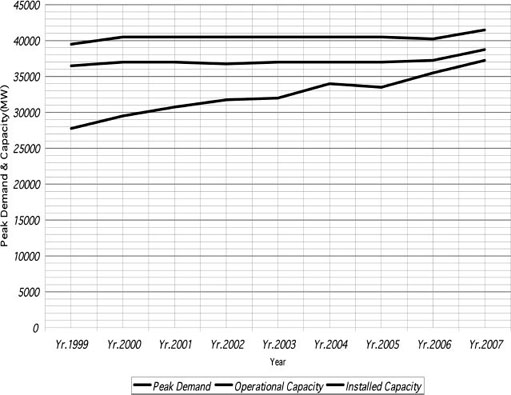 The end result is unscheduled load shedding as well as planned load shedding. This underscores the energy poverty issue in South Africa, where there is significant expansion in demand and supply coupled with a lack of reliable access. In order to effectively solve this problem South Africa must improve on energy efficiency, introduce demand scheduling and undertake to use alternative energies as well as strategically increase its supply of energy.

All these methods are significant though the strategic demand reduction, especially via the practice of energy efficiency, seems the most effective and cost-efficient method. This is because it involves the use of the same amount of electricity input to undertake greater amount of tasks/work. It may encompass the use of design, operation and management principles that are more efficient in energy utilization. As a result the idea of green building and energy conservation are set to feature prominently in the path to increase reliable energy access.

It should be noted that electricity demand reduction is made difficult by the perceived low price of power, lack of knowledge and understanding of the concepts, institutional barriers and resistance to change as well as lack of investors’ confidence due to the lengthy payback period which compounds the problem. The South African Energy Efficiency Strategy remains focused on the overall electricity demand reduction of 12 per cent by the year 2015 as a means of alleviating energy poverty (Department of Minerals and Energy (DME), 2005). The promise of increased access to electricity through demand reduction makes a convincing argument for energy efficiency studies.

While looking at capacities and demand for energy one should not lose focus of the fact that South Africa’s energy sector is reputed for its high carbon dioxide intensity. This is evident in recent reports on global warming outlined in the 2007/2008 United Nations Development Programme (UNDP) human development report entitled ‘Energy development and climate change; decarbonising growth in South Africa’, which observed that by international standards, South Africa’s economy is extremely high energy intensive in terms of energy consumption in relation to its Gross National Product. The UNDP’s report (2007) further stated that despite its relatively low GDP (52nd in the world) and low human development index (121st in the world), South Africa had relatively high green house gas emissions (37th in overall carbon dioxide gas emissions according to the 1999 data supplied by the department of tourism and environment).

This is mainly due to the fact that coal remains the dominant energy supply source at 70 per cent of the country’s primary energy followed by electricity and natural gas at 28 per cent and 2 per cent respectively; in addition, coal fuels 93 per cent of electricity production (DME, 2005). Available data indicate that South Africa’s energy sector remains the highest contributor to carbon dioxide gas emissions to the atmosphere at approximately 70 per cent (UNDP, 2007). This implies that any demand reduction as a result of energy efficiency would greatly contribute to a reduction in green house gas emissions, especially carbon dioxide (CO2).

UNEP (2007) observes that buildings account for between 30 and 40 per cent of all primary energy worldwide. In South Africa, the building industry accounts for 27 per cent of electricity use and 12 per cent of the final energy use (DME et al., 2002). Figures 8.2 and 8.3 illustrate details of energy use in South Africa. 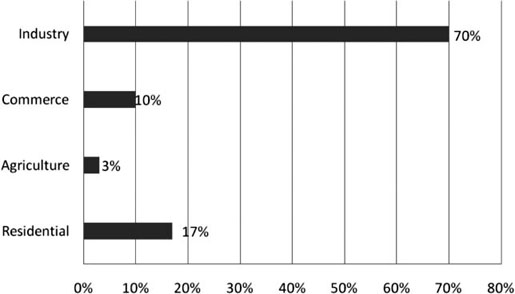 Building energy can be categorized according to the phase of energy use. Jones (1998) and later Sartori and Hestness (2007) explain that building energy can be of embodied, grey, induced, operation or demolition-recycling type (Jones, 1998; Sartori and Hestnes, 2007). In a study done for office buildings in the United States, Japan and Finland, Jumilla (2004) summarizes various energy phases for buildings in Figure 8.4. 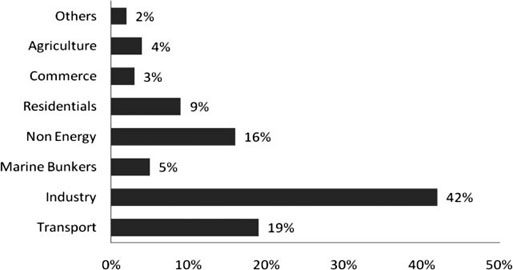 Figure 8.4 Energy use by life cycle for selected cases 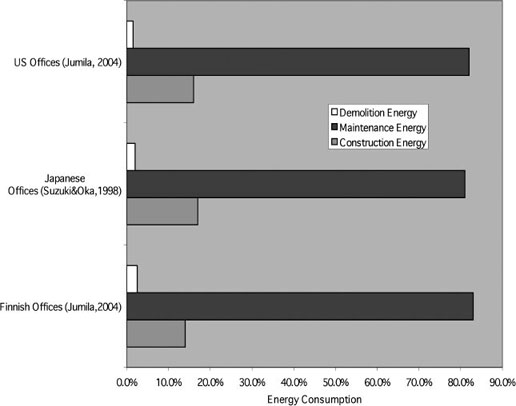 It can be seen that the bulk of energy use in buildings is operation energy (Jumilla, 2004). As such it is the energy that makes the building habitable and includes consumptions on heating, ventilation, lighting and air conditioning (Sartori and Hestnes, 2007; Jones, 1998). Comparatively, demolition/recycling energy and construction energy contribute negligibly to the final energy use in the life cycle of a building (refer to Figure 8.4). As such, energy efficiency becomes an automatic choice for energy management in buildings. The main drivers for energy efficiency are the twin issues of economic returns due to savings in energy use and reduction in the emissions of CO2 gas in the atmosphere as explained earlier. In South Africa, the Energy Efficiency Strategy paper asserts that a 25 per cent saving is possible in the commercial and public building sector (DME, 2005). Liang et al. (2007) report that improving energy efficiency in buildings is one of the most cost-effective ways of reducing greenhouse gas emissions, particularly CO2. However, it must be remembered that energy efficiency programmes in buildings must be properly focused on both new and existing buildings alike.

Several instruments or options are available towards the promotion of energy efficiency in buildings. Van Egmond (2001), OECD (2003), Kuijsters (2004) and Reinink (2007) separately affirm these options as regulatory, fiscal, economic, or communications instruments; these instruments may take the form of regulatory instruments, indirect regulation or information instruments (see Figure 8.5). It is worth noting that the choice of these instruments by governments is determined by the level of success that is achievable when applied. This is, however, variant to the socio-economic and political context of the locality. It is noted, as an example, that implementation of the building codes have reduced energy consumption of new dwellings in the USA by about 30 per cent. The Chinese government have established an energy consumption target in buildings which is 65 per cent less than the current practice in existing buildings, via an ‘energy consumption standard’ for the construction sector whose compliance is encouraged by tax and fees rebate systems for low-energy buildings to encourage their construction (UNEP, 2007). On the other hand, energy regulations in buildings in the Netherlands reduced consumption rates by 15 per cent on introduction in 1995 and later by 27 per cent on tightening of requirements (Ecofys, 2004). Other countries where the introduction of energy regulations have been successful are Denmark (Act to Promote Energy and Water Savings in Buildings)1; and India where the Energy Conservation Act was enacted in 2001.2 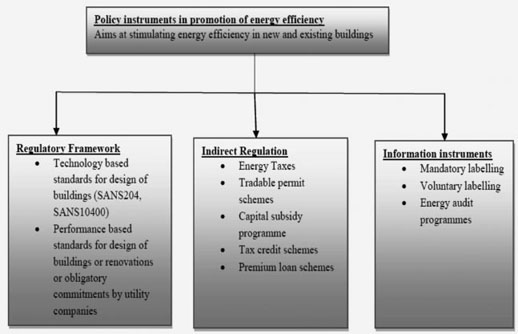 Regulation governing energy efficiency in buildings in South Africa is still in infancy. It is currently to be found primarily under the Electricity Regulation Act,3 which stipulates that the regulator shall take into account the energy efficiency measures undertaken by the client while deciding on tariff structure and the electricity regulations for compulsory norms and standards for reticulation services.4 It must be noted, however, that building controls and regulations with regards to energy efficiency may be through voluntary implementation or mandatory implementation or may entail a mixed approach (see Figure 8.5).

The regulatory framework for buildings in South Africa is defined by the National Building Regulations and Building Standards Act 103 of 1977. Section 4 of this Act and the subsequent amendments clearly vest the power of approval of buildings with the local authorities. The approval process revolves around administrative matters, such as protecting property, public health and safety and convenience for users and occupiers of the building. In addition, a daily fine of ZAR100 is prescribed by the Act as payable for any day that an illegal structure remains erected. Further, section 15 of the Act authorizes the building control officers from the local authorities to enter facilities and make assessments in relation to applications for approval.

Most importantly, the Minister is empowered to make additional regulatory sections to this Act in consultation with the local authorities. This could include the following, among others:

1  Preparation, submission and approvals of plans and specifications or alterations

2  Inspections and tests on all buildings

4  Provision of ventilation, artificial lighting, heating and other building services

Indirect regulation is not overtly noticeable in South Africa except via the programmes of Demand Side Management (DSM) run by the electricity supply commission, Eskom. In these programmes subsidies are provided for installation of energy efficient motors and solar geysers.

8.4 Promotion of energy efficiency in buildings in South Africa

The initial phase of energy efficiency programmes by the South African government was the publishing of two white papers which culminated in the energy efficiency strategy (DME, 2004). In addition, in response to the worrying electricity supply problem, Eskom introduced a DSM measure which aimed at load reduction (Harris and Krueger, 2005). Harris and Krueger (2005) further observe that the DSM was accompanied by the imposition of electricity tariffs to bolster cash reserves for the electricity generating company and in the process provide capital for investments in future power plants.

Winkler et al. (2006), Winkler (2007) and Talukhaba and Aduda (2008) have observed that policies focusing on greater efficiency lead not only to energy savings, but also to cost savings. All policy interventions have upfront costs, but energy efficiency saves money over the life of the intervention. Such savings do not only have an economic benefit, they make a contribution to social development by benefiting poor households. Bennett (2001) outlines five reasons for resistance to the implementation of energy efficiency opportunities in South Africa as related to attitude (I know my business best), resistance to change (everything is going along just fine), low cost of energy (many users see energy as a minor input cost, relative to raw material and labour, and tend to concentrate on these), lack of capital and uncertainty regarding the future.

In the building sector, energy efficiency programmes additionally concentrated on the development of a star rating system in the proposed energy efficiency standards. This standard prescribed the energy efficiency levels per square metres of the floor area for specific tasks and different climatic areas (Harris and Krueger, 2005; Standards South Africa, 2008).

Tags:  Green Buildings and the Law