Empowered or disempowered? The role of national parliaments during the reform of European economic governance

This chapter investigates how the intergovernmental reform process of European economic governance affected national parliaments’ oversight of that policy area. The chapter addresses the following questions: which parliaments became disempowered and which managed to secure their formal powers? What domestic and international factors contributed to the (dis)empowerment of national parliaments? What consequences do the observed practices have on the quality of democratic control in European economic governance?

The chapter examines how national parliaments in all eurozone states were involved in approving the following measures: the European Financial Stability Facility (EFSF), both its establishment and the increase of its budgetary capacity; the European Stability Mechanism (ESM); and the Treaty on Stability, Coordination and Governance in the Economic and Monetary Union. The dependent variable of the study is operationalized as the presence or absence of so-called ‘emergency legislation’ or ‘fast-track procedures’ that allow governments to accelerate the legislative process and minimize the risk of a default by constraining national parliaments’ powers. Fast-track procedures are applied in exceptional situations requiring rapid legal output. They shorten the legislative process and limit the involvement of national parliaments (for instance, it is a common practice in many states to accelerate the approval process by limiting the number of parliamentary readings from three to one). Another manifestation of emergency legislation is a legislative merger. Mergers constitute legal packages comprising two or more bills submitted to a national parliament for discussion and vote. Parliaments have only one vote at their disposal in order to approve or reject the whole legal package.

In the empirical dimension, this chapter systematically maps patterns of national parliaments’ (dis)empowerment during the reform process of economic governance and demonstrates what domestic and international factors explain the variation. The findings demonstrate that whereas northern European parliaments’ powers were secured (or in some cases even fostered), southern European parliaments became disempowered due to the following factors: (1) domestic constitutional set-up allowing implementation of fast-track measures, (2) national supreme or constitutional courts’ consent to extensive application of emergency legislation and (3) international economic and political pressure on governments in southern European states to prevent default in the approval process. Due to significant power asymmetries national parliaments remained de jure but not de facto equal in the exercise of their control powers at the EU level. As a consequence, both the disempowerment of particular parliaments and the asymmetry of powers in the collective dimension had a negative effect on the legitimacy of European economic governance.

This chapter begins by presenting shortly the empirical database developed for this study and the anti-crisis measures analyzed. In the next section the chapter presents the analytical framework, which concentrates on the role of national parliamentary oversight of European policy-making. Having defined emergency legislation, the chapter proceeds by presenting the empirical evidence on the dominant patterns of national parliaments’ (dis)empowerment and the impact of domestic and international factors. In the concluding section the chapter discusses the empirical findings from a normative perspective.

The empirical enquiry in this chapter is based on a database covering various patterns of approval/ratification procedures of major anti-crisis measures introduced in the eurozone between 2009 and 2013 (see Table 3.1 for a summary). The database provides information on how specific anti-crisis measures were approved in all eurozone member states. The measures under examination here are: the European Financial Stability Facility (EFSF), both its establishment and the increase of its budgetary capacity; the European Stability Mechanism (ESM); and the Treaty on Stability, Coordination and Governance in the Economic and Monetary Union. The database mapped the presence or absence of the following procedures accompanying the approval process of each anti-crisis measure: vote, plenary debate, merger and fast-track procedure. The database also provides further information on the number of plenary debates, as well as legislative acts that were merged either for the debate or a vote. The information was obtained directly from national parliaments.1 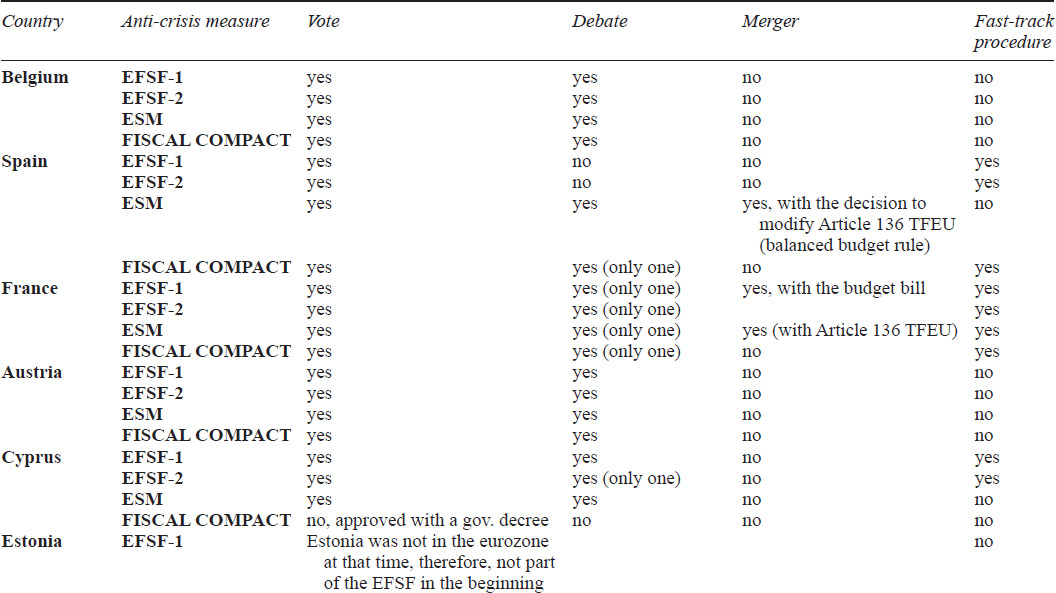 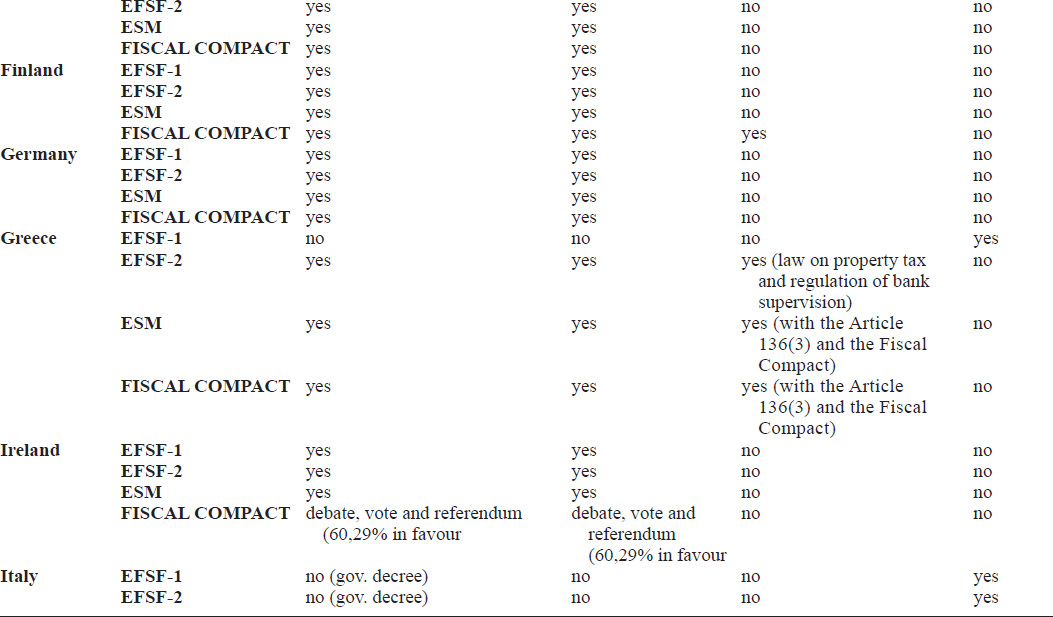 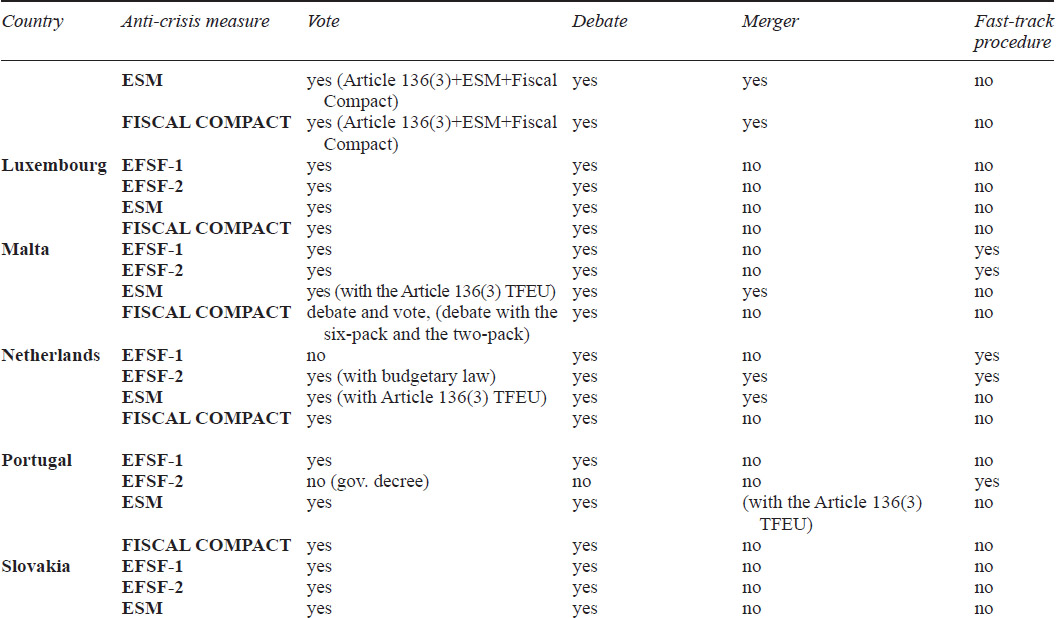 The dependent variable of this study is defined as the application of emergency legislation in a given eurozone member state during the European financial crisis. This study aims to contribute to the literature with a systematic analysis of approvals of all major anti-crisis tools in all national parliaments of eurozone states. Although all the abovementioned measures belonged to the so-called ‘reform package’, their content and legal status differ substantially. The EFSF and ESM established a bailout fund to provide financial support to eurozone member states that could no longer finance themselves on the markets (due to liquidity or solvency problems). While the EFSF was established as a temporary solution, the ESM became a permanent bailout fund. The Fiscal Compact is a stricter version of the previous Stability and Growth Pact. Member states bound by the treaty are required to introduce into domestic law a self-correcting mechanism that is supposed to guarantee that their national budgets are balanced. In particular, the general budget deficit shall not exceed 3 percent of GDP, the structural deficit shall be less than 1 percent of GDP and the debt-to-GDP ratio shall remain below 60 percent. In general, while the EFSF and the ESM deepened financial solidarity in European economic governance, the Fiscal Compact strengthened budgetary surveillance.

The role of parliamentary oversight in European policy-making

This study aims at establishing in which states national parliaments’ formal oversight powers have been restricted and why. In this study oversight is broadly defined as ‘the review, monitoring and supervision of government and public agencies, including the implementation of policy and legislation’ (Born et al., 2007: 9–10). Adaptation of a broader definition of oversight allows us to capture better how the period of European financial crisis affected parliamentary oversight practices beyond scrutiny of governments’ work. According to Born the key functions of parliamentary oversight are:

to detect and prevent abuse (…) or unconstitutional conduct of government and public agencies, to hold government to account in respect of how taxpayers’ money is used, to ensure that policies announced by the government and authorised by parliament are actually delivered and to improve the transparency of government operations.

Forms of parliamentary oversight concern institutionalized activities through which national parliaments exercise their control, in particular: vote, plenary debate, written or oral questions and reports. We can differentiate between strictly and weakly formalized tools of oversight. The level of formalization can refer either to the very entitlement to use a given procedure or the frequency of its application. Voting and plenary debates are the two most powerful and most strictly formalized forms of parliamentary oversight. Both entitlement and the frequency with which these tools can be applied are strictly regulated by national secondary law. If national law requires a debate and a vote on a given measure, national parliaments are obliged to provide them. Plenary debates and voting are also procedurally formalized. For instance, the law specifies whether a given bill can be approved with a simple or a special majority. Furthermore, the law also stipulates the required number of plenary debates (usually distinguished as the first, second or third reading). If a national parliament is composed of two chambers, the order of plenary debates and voting is also strictly regulated.

During the European financial crisis national and supranational executive institutions experienced an increase of power in European economic governance: the Council and national governments became the locus of decision-making (Hefftler et al., 2013, 2015). At the same time, the increase of power on the executive side was not accompanied with a corresponding increase of control powers by the European and national parliaments (Lord, 2012). On the contrary, parliaments were hardly represented in that process: the European Parliament was basically excluded while national parliaments played only a consultative role (Fasone, 2014a).

The distancing of parliaments from the reform process has been attributed to a considerable time pressure requiring prompt entry into force of the new legislation. Governments wanted to ensure that the measures agreed by them were also approved successfully at the domestic level. As a consequence, some governments turned to special fast-track procedures or merged the debated EU draft legislative acts in order to accelerate the legislative process but also to minimize the risk of a default. To what extent were national parliaments disempowered in the course of that process? There is no agreement in the literature. Whereas some studies maintain that parliaments’ powers suffered (Lord, 2012; Crum, 2013) others contradict – to some extent – the disempowerment thesis (Benz, 2013; Auel and Hoeing, 2014; Fasone, 2014b; Rittberger, 2014). For instance, Fasone (2014b) and Benz (2013) observed that rulings of national or supreme courts have actually fostered selected national parliaments’ control functions. We can explain the lack of consensus by the following factors: first, most studies focus on a limited number of cases or analyze the impact of one institution (for example, courts) on parliamentary oversight practice. Second, other studies analyze how effective parliaments were in making use of their already formally limited competences.

In contrast to the existing studies, this analysis covers all member states of the eurozone. Furthermore, the analysis does not focus selectively on the impact of one institution but rather considers the impact of both domestic and international factors. For the sake of coherence, the study concentrates on parliaments’ formal powers in the approval (ratification) of these legislative measures but not their execution or management.2

Second, constitutional and supreme courts decide whether a given application of emergency legislation is constitutional. However, as courts are embedded in a socio-political environment, their rulings can display different levels of independence. In particular, courts may be inclined to issue rulings supporting governments’ preferences. Under these circumstances their interpretation of constitutional principles may not be entirely impartial. One indicator of courts’ partiality can be a lack of coherence in their rulings over a short period of time. Third, due to international political or economic pressure governments may be more likely to limit parliaments’ powers. In particular, external pressure can mobilize governments to pursue measures to ensure successful ratification.

Emergency legislation is codified in all European states. The common feature of all special procedures is that they shorten the usual period required for approval/ratification of legislation and limit the role of national legislatures in the process. These procedures constitute a deviation from standard procedure as they allow governments to pass laws without or with only limited involvement of national parliaments. Furthermore, national legislation does not always explicitly label emergency legislation as a fast-track procedure. In many states decree-laws fulfil the function of a fast-track procedure (see, for instance, Article 86 of the Spanish Constitution and Article 77 of the Italian Constitution). However, as these practices are exempted from any form of harmonization, there is a lot of variation among European states (for more details on practices regarding fast-track procedures see Cartabia et al., 2011).

Tags:  Parliaments and the Economic Governance of the European Union