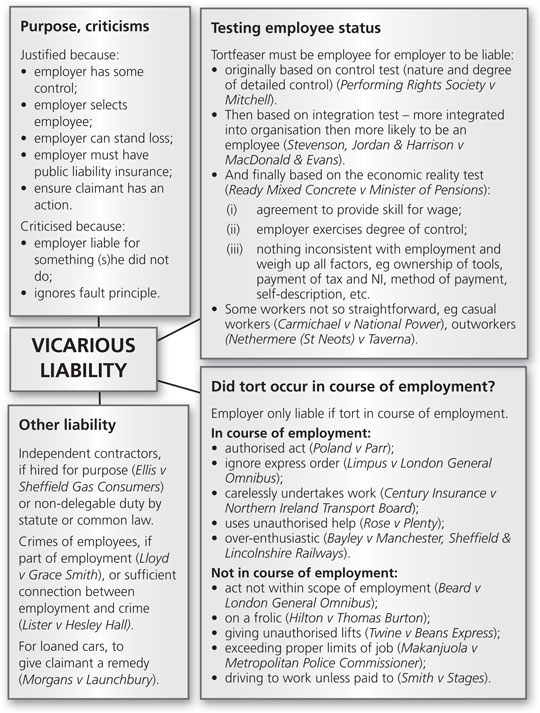 1.  Not a tort, but imposing liability on someone other than tortfeaser.

2.  Originally based on the idea of control, which was appropriate to the 19th century master and servant laws.

3.  Rarely appropriate now other than to employment.

4.  Sometimes criticised for being unfair because:

employer is made liable for something (s)he has not done; and

it directly contradicts the fault principle.

5.  But there are a number of justifications:

traditionally an employer did have control;

the employer is responsible for choice of staff;

the employer is better able to stand any loss, e.g. from profit;

employers must in any case insure for public liability;

it may be impossible to trace the person actually responsible (which may be appropriate, e.g. in medical cases).

6.  While vicarious liability has been accepted in sexual harassment (Brace-bridge Engineering Ltd v Derby (1990)) and racial harassment (Jones v Tower Boot Co Ltd (1997)), it has been rejected in claims against councils for physical abuse by carers (Trotman v North Yorkshire County Council (1998)), but accepted in claims against education authorities where staff fail to diagnose and make effective provision for special needs such as dyslexia (Phelps v Hillingdon LBC (2000)).

7.  Liability is only for a tort by an employee acting in the course of employment, so there are three key questions:

a)   Was the person committing the tort an employee?

b)   Was the tort committed in the course of employment?

1.  There have been numerous methods of testing employment.

2.  The original test was the control test from master/servant law:

c)   it is sometimes almost impossible to apply, e.g. medicine;

d)   but it may be appropriate to borrowed workers (Mersey Docks & Harbour Board v Coggins & Griffiths (1947)) or where hirer rather than employer gives detailed instructions (Hawley v Luminar Leisure plc (2005)).

3.  Lord Denning introduced the ‘integration’ or ‘organisation test’ in Stevenson, Jordan & Harrison v MacDonald & Evans (1952) (the more the worker is integrated into the organisation the more likely (s)he is employed) (Whittaker v Minister of Pensions and National Assistance (1967)).

4.  The modern test is that of Mackenna J in Ready Mixed Concrete Ltd v Minister of Pensions (1968) (the ‘economic reality’ or ‘multiple test’):

(i)   employee agrees to provide skill in return for a wage;

there are many factors to take into account, but are not definitive: ownership of tools, tax and NI liability, method of payment, self-description, etc.

5.  Certain types of worker do not conform easily to any test:

1.  Generally a question of fact, but based on policy so inconsistent.

2.  If the employee commits the tort in the course of employment then the employer can be vicariously liable.

3.  If the tort happens outside of the course of employment or the employee is on a ‘frolic of his own’ the employer is not liable.

4.  There is generally said to be liability for:

(i)   authorised wrongful acts; and

(ii)  authorised acts carried out in a wrongful way.

5.  Employer is obviously liable for (i) when instructing the employee to act wrongfully, but can also be liable if the employee has implied authority to commit the tort (Poland v Parr (1927)).

6.  Authorised acts carried out wrongfully include situations where the employee is engaged in his/her own work, but:

acts carelessly (Century Insurance v Northern Ireland Road Transport Board (1942), where an explosion was caused while delivering petrol after lighting a cigarette);

uses unauthorised help (Rose v Plenty (1976), where liability arose because the employer was seen to gain a benefit);

7.  Acts that are outside of employment or ‘frolics’ include:

carrying out an act not within the scope of the employee’s work (Beard v London General Omnibus Co (1900));

diverting away from the proper work on ‘a frolic’ (Hilton v Thomas Burton (Rhodes) Ltd (1961));

acting in excess of the proper bounds of the work (Makanjuola v Metropolitan Police Commissioner (1992)).

8.  The tests are confusing because cases with apparently similar facts will differ in whether liability is imposed.

9.  An employer can be liable purely because (s)he derives a benefit from the employee’s wrongful act (Rose v Plenty (1976)).

10.  Whether an employer is liable for torts of employees travelling to and from work depends on whether the travel is part of the work or paid for (Smith v Stages (1989)).

10.1.4 Liability for the Torts of Independent Contractors

1.  Hirer generally not liable, because of the absence of control.

2.  However, there are possible exceptions:

b)   if there is a non-delegable duty by statute, e.g. to provide and ensure wearing of safety equipment;

10.1.5 Liability for the Crimes of Employees

1.  There is not usually liability for crimes which give rise to civil liability also (Warren v Henleys (1948)).

2.  Liability is possible where the crime is part of the employment:

3.  The House of Lords in Lister v Hesley Hall Ltd