Empiricists, rationalists and the Enlightenment

Empiricists, Rationalists and the Enlightenment 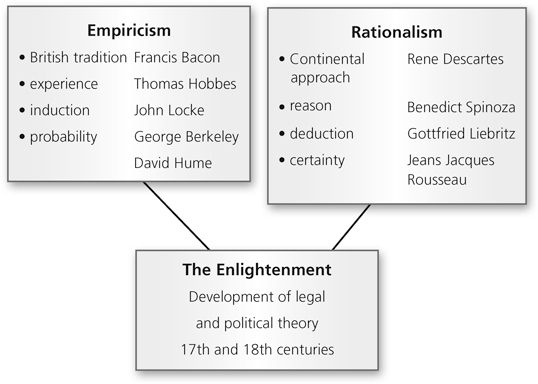 1.  Influenced by the Renaissance, philosophers tended to focus on human nature and the law of nature, but not in the same ways that classical and medieval thinkers had done.

3.  Interest grew in discoveries and the advancement of material science, with increased knowledge of physics, astronomy and mathematics, a seminal English influence being Sir Isaac Newton (1642–1727).

4.  The resulting scientific advances had a considerable methodological effect on legal philosophy, with much of the emphasis being redirected to collection of empirical data on the premise that, if it produced such exciting results for pure science, it could also be adapted to develop the social philosophical science of jurisprudence.

5.  The idea was that it is not the soul that provides the explanation of how mankind functions, but a constantly changing and developing collection of perceptions flashing across the brain, linked to some kind of association with the mind, an early anticipation of psychology.

6.  These were all influences that took strong root in Britain, the methodology to be used being empiricist, and its main characteristics and key words being:

Francis Bacon (1561–1626), whose Novum Organum Scientiarum (1620) is an exposition of the inductive method of interpreting nature

John Locke (1632–1704), whose best-known work is entitled An Essay Concerning Human Understanding (1690) but who also wrote influentially on government and rights

George Berkeley (1685–1753), whose views changed considerably during his lifetime, but who ended up believing that the only realities were God, the soul and ideas in the human mind

David Hume (1711–76), who wrote A Treatise of Human Nature (1739–40) explaining that all ideas are derived from sense impression, which he called the phenomena or appearances of things reflected in the senses (section 3.1.4).

8.  Of these and many others, perhaps the three most influential were Hobbes, Locke and Hume, an interesting comparison being that whilst the three rationalists dealt with in section 3.2 influenced English jurisprudence, those English philosophers in turn heavily influenced Europe and America.

1.  Thomas Hobbes (1588–1679) was a philosopher whose view of life as a pessimistic writer was coloured by a number of things as he:

lived through mostly depressing times, including the English Civil War

2.  Influenced by Galileo’s ideas on perpetual motion, he originally intended to write a comprehensive account of science, men and citizens, but was obliged to flee to the continent because of his political views.

3.  Eventually he published his important work Leviathan (1651), expanding on an earlier work De Cive (Concerning the Citizen) (1642), in which he argued that:

(a)  Man is selfish, self-interested and pursues his own good at the expense of others

(d)  given these characteristics of human existence, Man’s life would inevitably be ‘solitary, poor, nasty, brutish and short’, and a ‘war of every man against every man’.

4.  However, there are some positive counter-balances, including the fact that:

(a)  people possess a right of nature, i.e. a wish to survive

(b)  they have a degree of rationality, or law of nature

(d)  this leads to a rough state of uncomfortable balance in society.

5.  What is needed, therefore, to guarantee stability is a ‘Leviathan’ (in this context a person or body of formidable ability, power or wealth) who must provide the basis for a social contract, which may be either:

(a)  an absolute monarch, or

(b)  a democratic parliament.

6.  The Leviathan is given absolute power in return for securing peace and stability for its citizens, so if power is the sole element that legitimates the law:

(b)  values such as justice, morality, freedom and property have no universal or eternal meaning, being dependent upon the policy of Leviathan

(c)  the state is always right as long as it is achieving its primary objectives of stability and maintenance of peace.

7.  His discussion of what he identifies as the 19 laws of nature can be distilled to the following basic rules:

(a)  men should strive to keep the peace

(c)  generally they should follow the golden rule of ‘do as you would be done by’.

some of the ideas of legal positivism, in a disregard of the need for morality, freedom, justice etc.

perhaps most of all, and explanatory of the others, pragmatic responses to contemporary difficulties, or an early form of realism

a counter-balance to more optimistic traditions of legal thinking

an argumentative inclination to enter into philosophical disputes, reminiscent of HLA Hart in the 20th century.

1.  John Locke (1632–1704) led a varied earlier life, mixing the occasional practice of medicine and involvement in political intrigues with experimental science and travel, obtaining extensive political experience working for the Earl of Shaftesbury followed by high administrative offices, and so developing his interest in government.

2.  Major key points in his natural rights philosophy are:

(a)  the existence of a benign state of nature, but without organisation