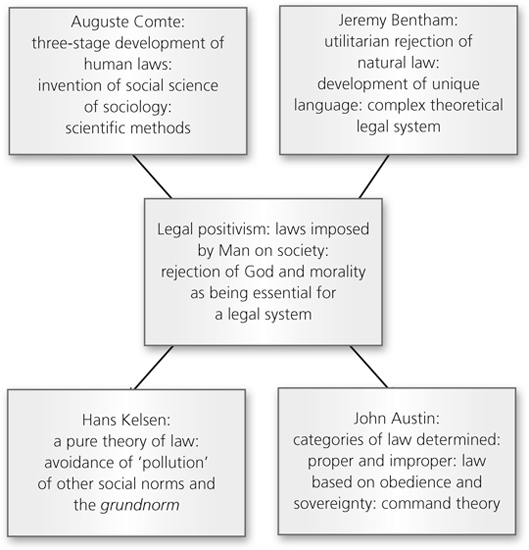 1.  As a general guide, the natural law school of philosophy judges the validity of law by:

(a)  reference to religious or moral criteria

(b)  ideas derived from subjective beliefs rather than objective data

(c)  requiring extraneous factors and considerations to be brought into the discussion.

2.  In its purest form, legal positivism takes the opposite view so that it:

(a)  examines and assesses a legal system on the basis of the law applicable to a particular society, i.e. within a defined jurisdiction

(b)  only considers laws imposed and operated by valid human machinery

(d)  is only incidentally concerned with justice

(e)  assesses the particular municipal law under consideration by reference to sanctions, rules, principles and conventions

(f)  is legally posited or imposed (this is where ‘positivism’ comes from, rather than implying the opposite of negative).

3.  However, in practice, much legal positivistic thinking does implicitly accept an element of moral influence in the imposition of law, whilst still maintaining that law and morals are two different and distinct concepts, on the practical basis that law would barely work if it was contrary to the generally accepted morality of the society in question.

4.  Legal positivism is therefore based on an express or implied acceptance of the principle of moral relativism, which:

(a)  does not acknowledge absolute human moral and behavioural standards

(b)  does recognise cultural, religious, social and other differences.

(b)  changes are bound to occur in the way that people understand and justify beliefs and behaviour, resulting from (amongst other things):

the passage of time

their stage of social and political development

their religious viewpoint, or absence of such beliefs

(c)  this reflects the views of the Greek Sophists, who believed that Man is the measure of all things, and were doubtful of being able to discover anything that was really objectively true.

6.  So two broad and different views of human life lie behind the traditional natural law and legal positivist theories, with natural law:

(b)  reaching conclusions from this to arrive at a definite explanation of that nature.

7.  Problems with natural law are that the initial hypothesis may be inappropriate, or affected consciously or subconsciously by the ideological beliefs of the person who believes in that theory.

8.  On the other hand, legal positivism does not concern itself with extraneous moral or religious considerations, but concentrates on the legitimacy of the man-made laws that apply to the particular society under consideration.

9.  Problems with legal positivism are that it can lead to simplistic conclusions about the legitimacy of law within a particular society that have no bearing on the non-legal outcomes that people expect from their laws, which (depending on the society and amongst other possible criteria) may include:

democracy (of which there are many variations)

10. Positivism has a number of variants of which the most popular current version is normative legal positivism, the main later-20th-century proponents of which were Kelsen and Hart.

11. This theory attempts to steer a course between theological approaches to jurisprudence, such as those of Aquinas and Blackstone, and the strict Austinian command theory.

12. The result is primarily positivist but able to take into consideration to some extent the law’s practical normativity – hence law and morality do not have to be welded together, giving us the separability thesis.

13. Hart summarised this by saying that if a rule violates standards of morality it can still be law, but conversely that although a rule might be morally desirable it does not mean that it is law (see 5.1).

1.  Auguste Comte (1798–1857) was one of the main philosophers whose ideas led to the rapid growth of legal positivism in the 19th century, and he is also credited with the invention of sociology, encompassing the scientific investigation and analysis of society.

2.  He believed that the highest form of human knowledge relates to the simple description of sensory phenomena, basing his ideas on a three-stage evolutionary law in which the following steps are identified:

(a)  Stage 1 is theological, where human beings explain the natural events with which they are confronted by reference to anthropomorphic wills:

‘anthropomorphism’ means attributing human form or behaviour to animals or deities, and so would equate to chthonic (pronounced ‘thonick’) systems of law

‘chthonic’ means laws as perceived by aboriginal, native or indigenous peoples, the origins of which are lost in the mists of time, and still relevant in some parts of the world, e.g. Australia and New Zealand in a Western context, and the Amazon Basin in a primitive context.

(b)  Stage 2 is metaphysical, during which these wills are depersonalised, and essences or forces (such as the force of nature) are used to explain phenomena:

‘metaphysical’ means in a general sense the system of first principles and assumptions underlying an inquiry of a philosophical nature.

(c)  Stage 3 is positive or scientific, and is the final development:

in a sense this combines the methodology of the empiricists and rationalists (chapter 3).

3.  Legal positivists are so described because, through an observation of legal phenomena, they arrive at a definition of law based on actual experience, rather than attributing it to an unseen God or deities, human nature, morality or other imponderables.

1.  Jeremy Bentham (1748–1832) pursued philosophical interests such as utilitarianism (chapter 6) that were very much wider than the conventional limits of jurisprudence, but nevertheless his influence on legal positivism was considerable, principally through his disciple John Austin, so it is important briefly to consider that input.

2.  His writings are enormously complex, so much so that at one point HLA Hart, who was editing some of his work, doubted that he had the technical expertise to unravel much of its meaning.

3.  Bentham rejected ideas of natural law and claims that it had any internal qualities, famously referring to the French revolutionaries’ constitution as ‘nonsense on stilts and bawling on paper’.

4.  He did not accept notions of God’s will in the sense that Augustine (section 2.3.1) and Aquinas (section 2.3.2) believed in it, but replaced them with the idea that law is an assemblage or collection of signs expressive of the sovereign’s subjective will.

5.  The sovereign is the person or body who is obeyed in a given political community, whose members have the habit of obedience to a person or body above them.

(a)  in its first strict and proper sense, a traditional monarch