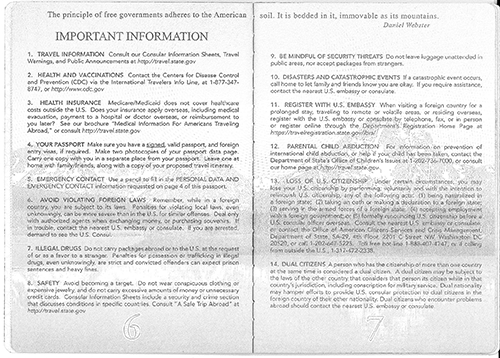 13. LOSS OF U.S. CITIZENSHIP Under certain circumstances, you may lose your U.S. citizenship by performing, voluntarily and with the intention to relinquish U.S. citizenship, any of the following acts . . .

Citizenship in the United States emerged in the eighteenth century in response to British treatment of national allegiance as singular and perpetual. While the United States advocated for transferable loyalty, it, too, was suspicious of divided national loyalty. Thus, the United States enacted grounds for expatriation in order to regulate the exclusive nature of nationality. Transnational immigration, changes in national and international norms, and new interpretations of dual citizenship domestically gradually led the United States to adopt a lenient and pragmatic policy regarding dual citizenship. However, the War on Terror brought back some of the exclusive notions of citizenship (even if they were not put into practice). Judicial interpretations of the Constitution that prohibit the use of expatriation policies do have an effect on our conception of the world. However, it is immediate (political and practical) concerns that shape the stance toward dual national allegiance. Socially, dual citizenship is still considered by many politicians to be objectionable, implying a will not to be American—a will that can, in turn, be seen as un-American.

In this book I have analyzed revocation of citizenship laws in the United States. In the initial chapters I showed that there is an overarching principle that has played a role in the perception of citizenship and its revocation, both in the past and present. Forced expatriation as a policy became legitimate and widespread with the institutionalization of a world order that did not tolerate multiple national allegiances.

Figure 9.1. Grounds for Expatriation from the United States, 1949–1985. Data compiled from the Immigration and Naturalization Service Statistical Yearbooks, between the years 1949 and 1985.

The twentieth century brought numerous changes to our society, including the crystallization of the national world order (and some would say the beginning of its demise). The thesis of this book is based on a comparative analysis of one of the less-acknowledged phenomena in the Western democratic world—that of stripping away citizenship. It is less known because there is an assumption that the status of citizenship in democratic countries is secure and that the revocation of citizenship is associated only with totalitarian or oppressive regimes.1 In democracies, new (and not only illegal) immigrants are sometimes suspected of dual loyalty, but native-born nationals are usually automatically perceived as loyal. For example, it is said that having been born in the United States makes you 100 percent American. But this is not borne out by the facts. Between 1949 and 1985, more than 100,000 Americans lost their citizenship on various grounds (Figure 9.1). Since the Supreme Court had already removed many of the grounds for forced expatriation during this period, it is reasonable to presume that even more Americans lost their citizenship in between the American Civil War and the Second World War, though such revocations were not recorded by any official American agency. The United States is not unique. Most countries in the world have some variation on statutes that specify grounds for forced expatriation.

The national logic as an ideal organizing principle for the world cannot accommodate multiple allegiances to different states. During the debates on citizenship laws, politicians and diplomats did not take this possibility lightly. After the Civil War, the United States was concerned about the loyalty of its citizens and took different measures, including forced expatriation, in order to limit multiple national loyalties. From the 1950s onward, however, the three branches of the United States government gradually adopted a more lenient position toward split or divided national allegiances. This transformation was not linear or inevitable. In the nineteenth century, it was the diplomatic and consular officers who established the norms regarding exclusive citizenship. Since the Civil War, Congress’ role has been to step in by codifying the existing norms and by enacting new regulations regarding expatriation. Until the Cold War, both the executive and judicial branches followed the lead of the legislators who were in favor of revoking citizenship. Only in 1958 did the United States Supreme Court begin to rule against the constitutionality of forced expatriation. Gradually, the two other branches of government began to recognize the shift in attitude toward dual citizenship. This process culminated in 1990 with the new standard of the State Department that acknowledged that expatriating acts without intent to relinquish American citizenship would no longer result in the loss of American citizenship. Today, the United States tolerates dual citizenship, and it is impossible to lose American citizenship without the individual deliberately intending to abandon his citizenship. However, although diminishing in its influence, the national world order is still hegemonic, and even received some reinforcement after the events of 9/11. Moreover, while the United States tolerates dual citizenship, it has still not formally accepted it. A comparison between Canada and the United States can help show the difference between partial toleration of dual citizenship in the United States and wholehearted embrace of multiple national identities in Canada.

Between Tolerating and Embracing Dual Citizenship

Bloemraad2 analyzed immigration and naturalization patterns in the United States and Canada and concluded that the public embrace of dual citizenship in Canada has promoted immigration to that country. In contrast to the United States, which does not explicitly allow dual national allegiances, Canada explicitly affirmed its acceptance of dual citizenship in 1977. Bloemraad suggests that acceptance of dual citizenship is associated with limited military conflict. The particular security concerns and histories of nation-building in each country gave rise to greater tolerance for dual citizenship in Canada. The United States was created out of an armed revolution and has since participated in many wars. Under the circumstances, citizenship is perceived as an issue of national security. U.S. expatriation polices have usually been presented (and justified) as the means to prevent dual loyalty of its citizens. Although this law has not been enforced in the past three decades, dual nationality is still officially prohibited in the United States. Until the 1990s, most grounds for taking away citizenship were based on a direct or indirect presumption that the citizen had transferred his or her nationality or desired to do so. This guiding principle can explain why expatriation was common in the United States, while Canada has involuntarily expatriated only thirty-seven people since 1977.

In 1946, the Canadian Citizenship Act of 1946 made Canada the first member of the British Commonwealth to establish a citizenship status distinct from that of the “Mother Country.” Until then, both native-born and naturalized citizens were considered British subjects. The current regulations regarding citizenship came into force thirty years later with the Citizenship Act of 1977.

The difference between the two laws regarding the loss of citizenship is a significant one. The Citizenship Act of 1977 is a benchmark for the perception of Canadian citizenship and its loss. Until then, citizenship was associated with fidelity to a single nation and thus could be revoked on many grounds. Subsequent to the 1977 legislation, citizenship was perceived as a natural right that the government could not revoke. That is, prior to 1977, citizenship could be lost on the grounds of acquiring another nationality (other than by marriage), serving in the armed forces of another country, taking an oath or other declaration of allegiance to a foreign county, renouncing Canadian citizenship, or obtaining that citizenship by false representation, fraud, or concealment of material circumstances. In contrast, after 1977, most of these provisions were lifted, and the Canadian government publicly and proudly asserted its embrace of dual citizenship and removed the exclusivity clause from its oath of allegiance. This transformation in Canadian politics can be attributed to the emerging multicultural perspective and to the need to accommodate the duality of its national identity as both Francophone and Anglophone.

According to the 1977 legislation, citizenship can be revoked for only two reasons. One is if it was obtained by false representation, fraud, or knowingly concealing material circumstances. The other concerns second-generation Canadians born abroad, who lose their citizenship when they turn twenty-eight unless they make an application to retain it and produce evidence of living in Canada or having a substantial connection with it. It is important to repeat that between 1977 and 2002, only thirty-seven Canadians lost their citizenship as a result of the first provision. Furthermore, it can be argued that those thirty-seven cases did not constitute revocation of citizenship because the individuals concerned should not have received it in the first place. Thus, the 1977 Citizenship Act in effect articulates the principle that Canadian-born citizens can never forcefully lose their citizenship.3