As a rough rule, the functions of contractual language can be summarised using the acronym COAL (conditions, obligations, authorisations, limitations). These functions require different words and phrases, as set out below.

1  When something must be done before something else may be done (condition precedent). For example:

The consent of X bank must be obtained before the terms of this agreement may be implemented.

This agreement may be renewed for a further period of two years subject to X having carried out the duties specified in section 7 to the satisfaction of Y.

3  When certain criteria must be fulfilled in order to qualify for a particular benefit, position, bonus, etc. In such circumstances, words such as fulfil, satisfy and meet are used in conjunction with words like criteria and conditions. For example:

X must meet the criteria set out in Schedule II in order to qualify for the bonus.

Therefore, in legal documents drafted in the third person, obligations which will come up in the future are often expressed using shall. For example:

At the time of writing 5 March 2012 is in the future and X is obliged to deliver the Goods (a defined term, hence the capital ‘G’) to Y on that date.

Shall is not required when there is no element of futurity in the agreed obligation. Here is an example:

A hereby grants B an exclusive licence to manufacture, use and sell the Licensed Products in the Territory.

In this clause, the word hereby tells us that there is no element of futurity in A’s obligation to grant the licence to B – it becomes an obligation at the point the document is executed.

Must is a good replacement for shall when expressing the imperative. For example:

If X becomes a party to this agreement, he shall [must] immediately pay to Y …

However, some take the view that must has an unnecessarily bossy feel to it, and accordingly prefer to use shall in its place.

Undertake is sometimes used as a straightforward synonym for shall but is more commonly used to indicate a more complex situation involving agreement to do something and acceptance of the associated legal consequences (usually of failure to do it). For example:

Endeavour is used to express an obligation to attempt something without being committed to achieving it – as in the example above.

Authorisations refer to those situations in which a party is allowed to do something but is not obliged to do that thing.

The word may is very commonly used in such circumstances, but should be treated with care since it has a number of meanings:

•   to express a possibility that something may be done (‘the Company may purchase further products in the future’);

•   to indicate that one has a discretion to do that thing (‘either party may assign the benefits under this contract on three months’ written notice to the other party’); or

•   to indicate a wish (‘the parties intend that the signature of this contract may signal the beginning of a mutually beneficial cooperation between them’).

The following words are generally used in the contexts suggested:

•   ‘may’ indicates a party’s discretion to do something (‘X may use the office premises’);

•   ‘may not’ indicates that a party does not have discretion to do something (‘X may not use the office premises’).

Limitations may of course take a number of forms – temporal, geographical, as to scope of activities, applications and responsibilities – though time limitations are perhaps the most frequently encountered of these. Words and phrases typically found in this context include:

The table below offers an at-a-glance guide to operative language for contractual purposes, with examples of usage: 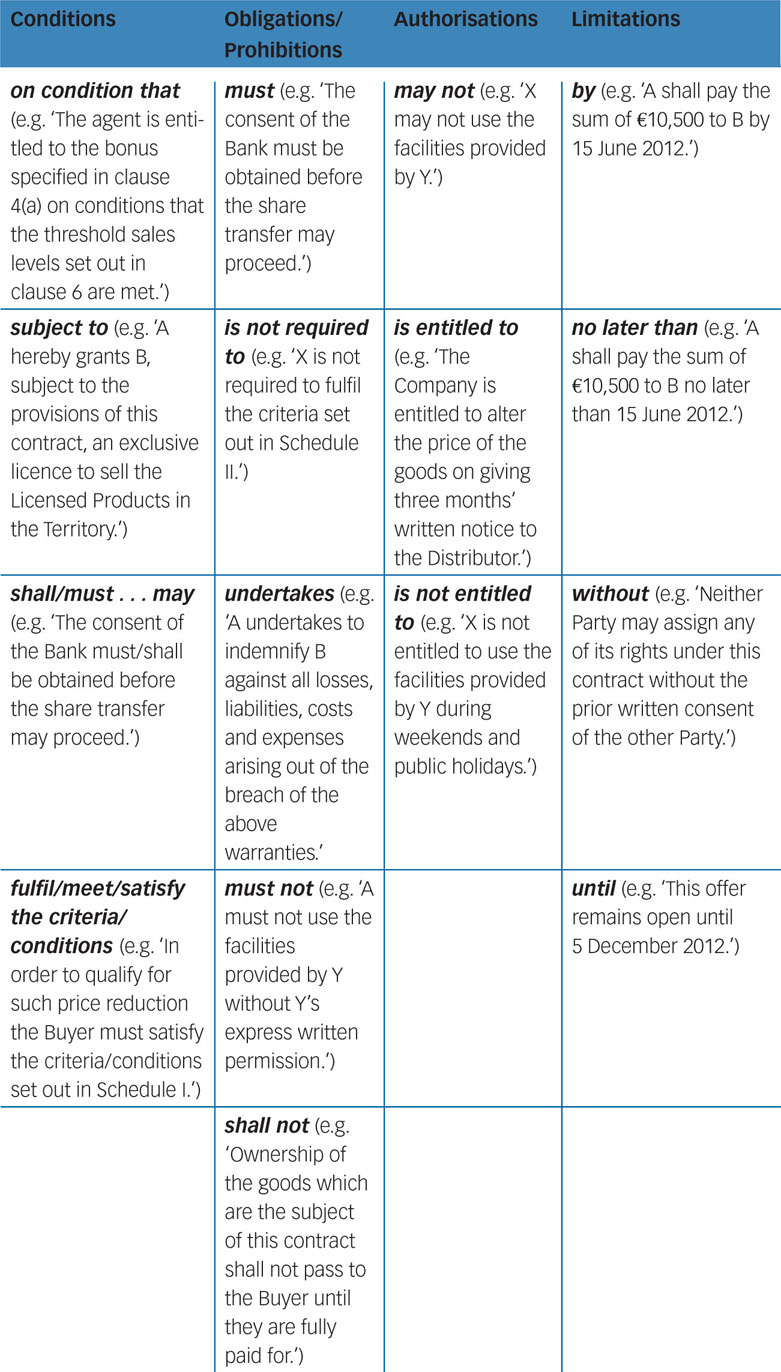 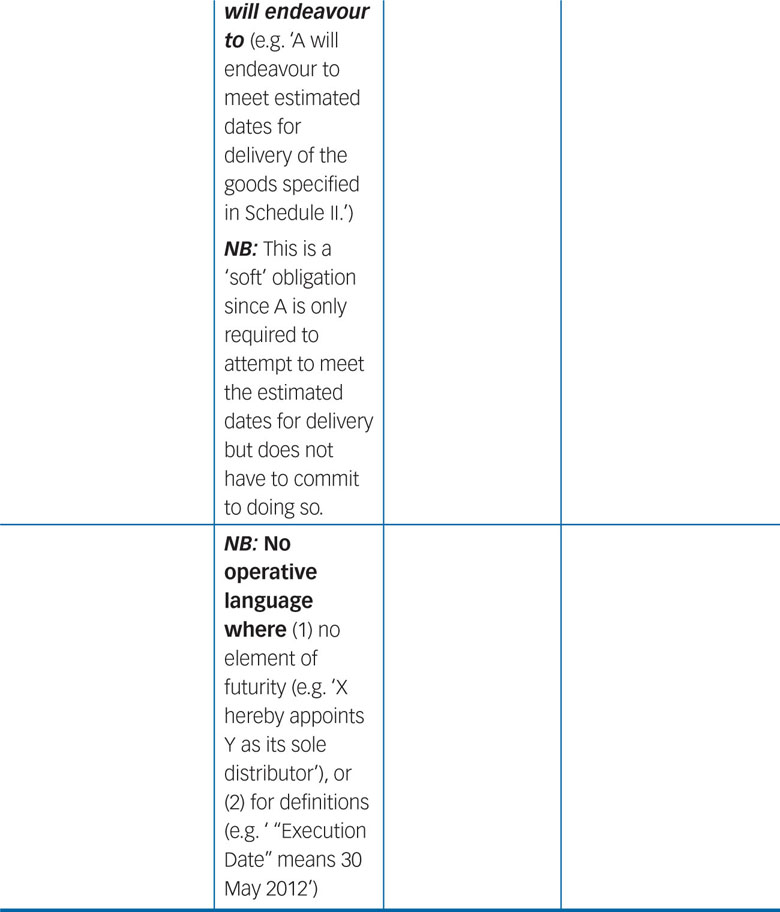 The notes set out below should be read in the context of the general notes on drafting contained in Chapter 7.

When drafting definitions, care should be taken that the definition given merely declares what a particular word or phrase is to be understood to mean, and does not contain any obligations.

Here is an example of a definition which has become merged with an obligation:

‘Completion Date’ means 13 August 2007, on which date Party A must pay the purchase price in respect of the Property to Party B and relieve Party B of liability for all rates and taxes payable on the Property.

This is bad drafting, because it results in hiding the obligation in a part of the document where the reader does not expect to find it. The contract will remain legally valid, but time will be wasted trying to locate the obligation.