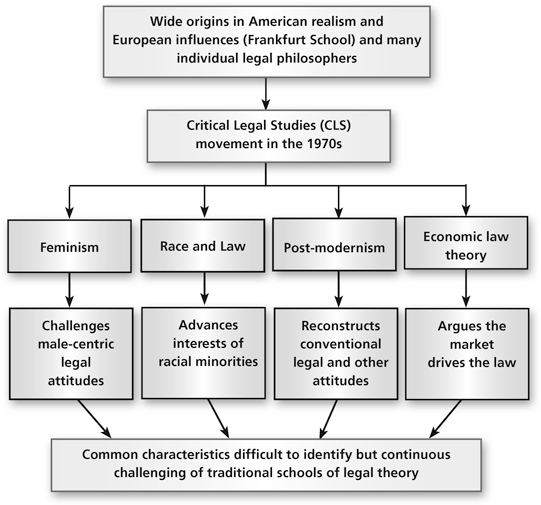 1.  In a broad context, critical legal studies (CLS) or theory can be traced back as far as the origins of natural law, in that many generations of scholars have sought to challenge the wisdom of their predecessors.

2.  In a narrow and more usual modern sense, CLS grew out of realism roots into a critique of existing attitudes within the (mainly American) common law system, expanding the indeterminacy thesis into other fields.

3.  The modern movement originates from the 1960s although it was only formally recognised in the late 1970s.

4.  Influenced by a variety of earlier European writers such as Marx and Engels, Weber and Marcuse, Gramsci, Foucault and Derrida, the focus is on:

(b)  consideration of the nature and extent of injustices, how they managed to become legitimated in the first place, and how once that has happened the position might be rectified

5.  Legal realism has also either formed the subject-matter of or influenced recent legal theory such as:

(a)  be referred to by other descriptions, such as ‘outsider jurisprudence’

(b)  often better be characterised by differences between writers than similarities or consistency, even within the same subject areas

(c)  encompass other elements of modernity such as globalisation and questions about the current or new world order in which we live.

7.  Examples of the varied writers within the broad band of critical legal studies include: