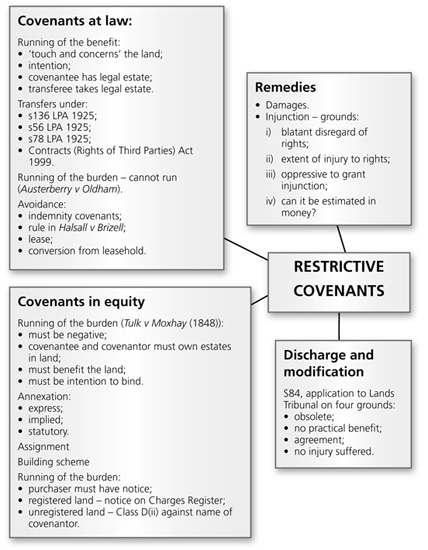 11.1 The Nature of Covenants

1.  A covenant is an obligation entered into by deed which affects the use of land for the benefit of another, e.g. someone’s land is not to be used for business purposes.

2.  It is an agreement made between the covenantee (who takes the benefit) and the covenantor (who carries the burden).

the contract is enforceable between the original parties, but under the rule of privity of contract a covenant at common law cannot impose burdens upon a third party;

the original parties continue to be bound even after they have left the property.

4.  Equity has intervened to allow the burden of covenants to run in limited circumstances.

1.  Covenants at law can be traced back to the 14th century (Prior‘s Case (1368)). A positive covenant that a prior and his convent would sing all week in the covenantee’s chapel was upheld, notwithstanding the fact that there was no servient tenement to carry the burden.

2.  There must have been an intention that the benefit should run with the estate owned by the covenantee at the date of the covenant (Smith and Snipes Hall Farm Ltd v River Douglas Catchment Board (1939), presumed under s78 LPA 1925).

11.2.2 Transferring the Benefit of Covenants at Law

1.  A covenant can be expressly assigned under s136 LPA 1925 as a chose in action, but it must be in writing. This is rare as there are other ways of assigning the benefit that are more convenient.

3.  S56 does not allow a benefit to be passed to future purchasers.

4.  S78 LPA 1925 has been interpreted to be effective to pass the benefit of a covenant to a third party if:

the covenant was entered into after 1925;

it is only for the benefit of owners for the time being.

5.  The Contracts (Rights of Third Parties) Act 1999 has made extensions to the rights of any third party to covenants entered into after May 2000:

it cannot be enforced if, on the proper construction of the contract, it appears that the parties did not intend the benefit to be enforceable;

the third party must either be named or be referred to generically, e.g. to X (owner of No. 2) and her successors, and the owners of No. 3 and No. 4 (the neighbouring properties). As there is no contrary intention shown then the contract will confer a benefit on the owners of Nos 3 and 4.

11.2.3 Transmission of the Burden at Law

1.  Under common law the burden of a covenant cannot run with the freehold land of the covenantor (Austerberry v Oldham Corp (1885)).

2.  The rule has been criticised, but was confirmed in Rhone v Stephens (1994): Nourse LJ – ‘the rule is hard to justify’ (Court of Appeal), but Lord Templeman held it to be ‘inappropriate for the courts to overrule the Austerberry case, which has provided the basis for transactions relating to the rights and liabilities of landowners for over 100 years …’ (House of Lords).

11.2.4 Avoiding the Rule in Austerberry 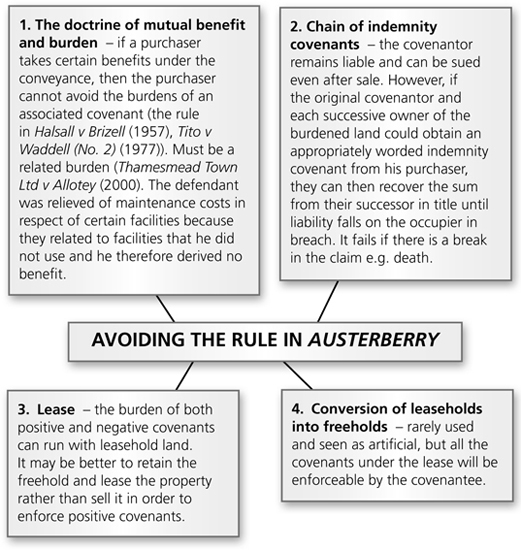 1.  The claimant sold a vacant piece of land in Leicester Square to a purchaser who had notice of a covenant restricting the use of the land (the covenantor agreed to maintain the square as a garden). The purchaser tried to build on the property.

2.  It was held that the owners of the neighbouring benefited land had a right in equity to enforce the covenant against the purchaser, because he knew of the covenant when he bought the land and was therefore bound by the covenant.

1.  The covenant must be negative.

A restrictive covenant is a covenant that does not require the expenditure of money.

Some covenants appear to be negative but are positive, e.g. not to let the property fall into disrepair is a positive covenant. Maintenance of the property would require expenditure of money.

3.  At law, a covenant can pass even where the covenantor has no estate in land, but the right would not pass in equity.

4.  The covenant must benefit or accommodate the dominant tenement. This means that it must affect the value of the land and must not be a personal benefit to the owner of the land.