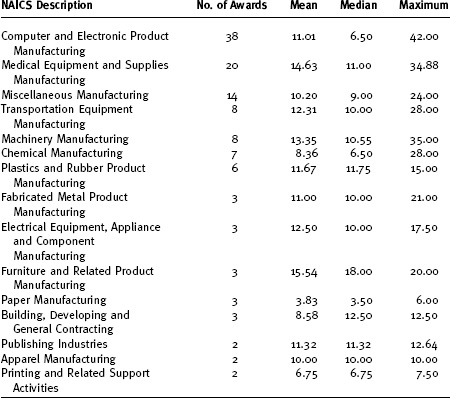 This chapter provides a review of court-awarded royalty rates in patent infringement cases, from 1990 through 2006. Patent licensing agreements are time-consuming to negotiate and difficult to administer. What happens when parties just can’t come to an agreement, and the patent holder decides to take the other party to court? How much time and effort should patent holders spend trying to enforce their patent rights? This chapter will address the royalty rates awarded at the district court level, by examining statistics relating to these rates, the considerations given by the courts to varying factors when determining those rates, and comments made by the Court of Appeals when reviewing lower court decisions.

A glance at the top ten royalty rate awards, shown in Exhibit 11.1, would convince even the faintest of heart that it is worth it to go to court. As the exhibit shows, the highest rate awarded at the district court level, in any patent case, was in 2001, when a Nevada court awarded Acres Gaming a royalty on Mikohn’s sales of progressive jackpot gaming machines (Mikohn Gaming v. Acres Gaming, Inc. (D. Nev. 2001)). In its order pertaining to an additional accounting of damages, the district court noted that evidence of damages presented to the jury was based on a royalty rate of forty-two percent for products without slot machines, and twenty-eight percent for products with slot machines. Since the jury awarded more than Acres’ damages expert calculated as a reasonable royalty, the court noted that “the jury exceeded the rates proposed by Acres’ expert.” 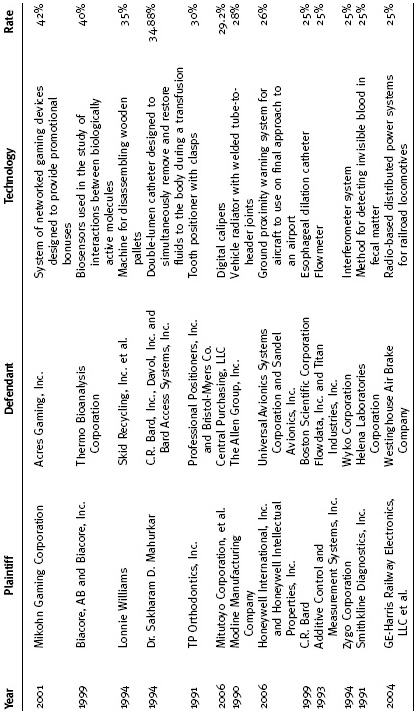 In the Mitutoyo case, the plaintiff was seeking damages based on lost profits, but failed to show that the infringing calipers and its own calipers competed in the same market. Accordingly, the court found that any claim from the plaintiff for lost profits would be entirely speculative, and instead awarded a reasonable royalty.

In the Honeywell case, the court entered the jury’s award of a twenty-six percent royalty, after finding that the award was supported by the weight of the evidence presented. It was deemed that the parties to the suit were direct competitors, and the jury’s award was within the range of royalties typically agreed to by participants in that field.

As Exhibit 11.2 shows, most rates awarded were in the six to ten percent range, with forty-nine awards made during the period covered by our survey. The most commonly awarded rate was ten percent, awarded twenty times during the relevant time period. As for the rest of the distribution, there are twenty-nine awards of five percent or less, thirteen awards of rates between sixteen and twenty percent, and only nine awards with rates higher than twenty-five percent. 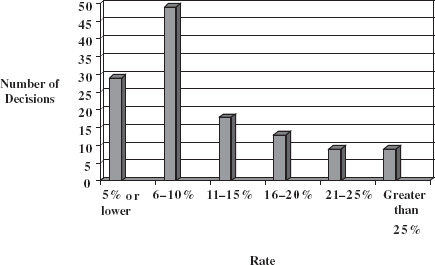 The royalty rates in this study have been categorized according to the U.S. Census Bureau’s North American Industry Classification System (NAICS). As Exhibit 11.3 shows, the industry with the most rates awarded was computer and electronic products manufacturing, which had thirty-eight rates awarded during the relevant period, with an average rate awarded equal to 11.01 percent.

CONSIDERATIONS CITED BY THE COURTS IN DETERMINING A REASONABLE ROYALTY

The Court of Appeals found that a royalty may be awarded based on an established royalty, if there is one, or if none exists, upon the result of a hypothetical negotiation between plaintiff and defendant (Rite-Hite Corporation et al. v. Kelley Corporation (Fed. Cir. 1995)). Because of this finding, existing licenses are often introduced as evidence at trial. In Mickowski v. Visi-Trak Corporation et al. (S.D.N.Y. 1999), the court awarded plaintiff a royalty rate of twenty percent of sales, because the plaintiff introduced evidence of other license agreements, for which he had received royalties of fifteen to twenty percent of sales, on products covered by his patent on computer software for monitoring die casting or injection molding manufacturing processes. The court chose the high end of this range, because the parties to the suit were direct competitors in the manufacturing and sale of die casting monitoring systems in the United States.