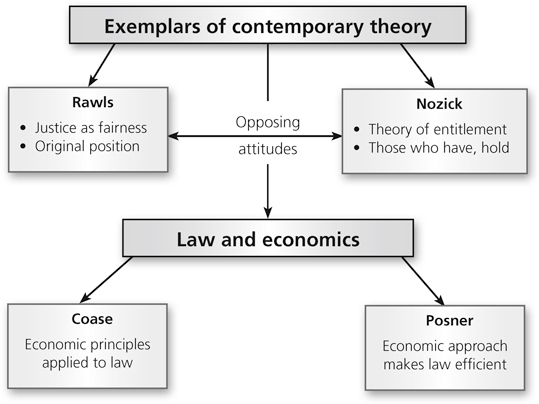 (b)  developed them in a series of subsequent papers and articles

2.  The structure of the revised edition of A Theory of Justice deals with theory in the first part, institutions in the second, and ends of justice in part three.

3.  His central aims and ideas formed the basis for a constitutional democracy, as an alternative to the utilitarianism pervading the Anglo-Saxon legal tradition (chapter 6), because the greatest good may not always produce the desired effect for a variety of reasons:

(b)  legal philosophy taking the natural law approach should be able to produce theory which overcomes that kind of inequity.

4.  Justice as fairness is a theoretical social contractarian and libertarian approach and relies on two principles of fair equality of opportunity and the difference principle:

(b)  the difference principle states that social and economic inequalities are to be arranged so that they are both:

to the greatest benefit of the least advantaged, consistent with the just savings principle, and

attached to offices and positions open to all under the conditions of fair equality of opportunity.

1.  It is necessary to apply Rawls’ first and second principles in conjunction with his two priority rules, The Priority of Liberty and The Priority of Justice over Efficiency and Welfare.

2.  Under the first priority rule justice principles are ranked in lexical order (i.e. the order which requires us to satisfy the first principle before moving on to the second and third etc.) so that:

(b)  decreasing equal liberty can only be done if people with less liberty are prepared to accept it.

3.  Under the second priority rule:

(a)  the principle of justice is prior to that of efficiency

(b)  fair opportunity comes before the difference principle

(d)  overall excessive saving rates must mitigate on balance the burden of those who have to bear that hardship.

4.  Distribution of all social primary goods must be equal unless advantage would accrue to the worst off people by unequal distribution.

5.  His notion of lexical distribution means that even if a suggested system of distribution is more economically efficient than another, it cannot be utilised if it would result in injustice to some of the potential recipients.

1.  Rawls suggests an ‘original position’ under which there would exist a ‘veil of ignorance’, an ideal theoretical system where justice principles are made from scratch by moral and rational people to whom a number of considerations would apply, i.e. they:

(a)  do not know who they would be under the new order (e.g. their age, sex, physical strength)

(b)  do not know what role they would fulfil (e.g. social or economic status)

(d)  would act with the general benefit of society at heart, bearing in mind the above considerations

(f)  would have the same rules applied to all members of the group at all times, for the same reason.

2.  Rawls believes that a social system should be designed and chosen carefully in order to ensure that distributive justice operates fairly, however things turn out, and this requires a just constitution securing:

(a)  liberty to enjoy equal citizenship

(b)  fair equality of opportunity

(d)  four branches of government, in order to deal with:

1.  Perhaps somewhat surprisingly, people operating the system need not be altruistic, sacrificing themselves for the common good, because under Rawls’ scheme they have to take measured decisions based on the fact that they might end up disadvantaged, and it would thus be in their interests (and everyone else’s) to ensure that overall fair provision was made for everybody:

(b)  whether or not people are actually being selfish, the circumstances of justice bring about conflicting individual claims.