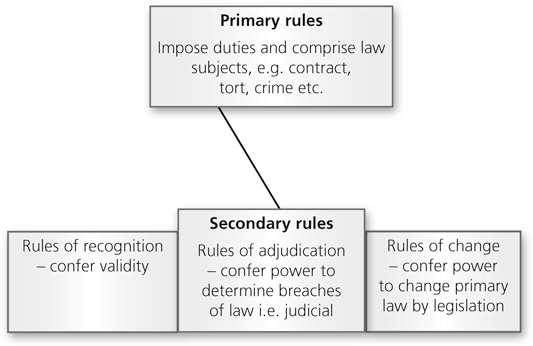 1.  HLA Hart (1907–92) addresses deficiencies in legal positivism that he sees (amongst others) in the approaches of his predecessors Bentham and Austin, and his contemporary Kelsen.

2.  In The Concept of Law (1961) he puts forward ideas that attempt to provide a more complete answer to the question of what constitutes law, going beyond the narrow command and purity interpretations and restrictions imposed on themselves by Austin and Kelsen respectively.

3.  If legal philosophers consciously confine their discussion to particular considerations such as sovereignty, sanctions or morality, they are not going to be able to explain law with universal values in relation to what Hart sees as the different rules that make up its constituent parts.

4.  He is also concerned with:

(a)  the nature of language;

(b)  how its use affects understanding of law.

5.  In dealing with the law it is impossible to take everything into consideration, which limits the ability of legal philosophers to address the constantly arising new situations that operating the legal system entails.

6.  The previous emphasis on the command theory of law, by which it is argued that the legal system forces people into obedience by sanctions, is:

(a)  correct in some particulars and so far as it goes

(b)  incomplete, as many citizens obey law not out of fear but out of a sense of obligation to do what they consider to be right

(c)  and what that is perceived to be will vary from one time and place to another.

7.  So there are internal and external influences that are brought to bear:

(a)  externally the citizen is obliged, by orders or commands reinforced by fear of sanctions, to be obedient

(b)  internally the citizen may be regarded as being under an obligation to obey legal rules setting acceptable standards because compliance is accepted by him under a sense of duty, rather than being imposed upon him from above by a political sovereign (body).

8.  The internal element is Hart’s development of the concept of law:

(b)  which advances to one that posits rules as a means of amplifying existing theories into a more cohesive and comprehensive whole that could also (like Kelsen) be applied on a wider basis than simply one given legal system.

9.  Hart does not restrict himself in this way but explains the operation of law in a wider context by looking at the nature of the rules that are always and universally likely to apply.

1.  This is achieved by developing a theory of the union of primary and secondary rules, which has a number of characteristics:

(c)  sociological, to an extent.

(a)  impose duties, setting out what people should or should not do

(b)  comprise specific categories of law, such as the rules governing contract, tort or crime.

3.  Secondary rules are of three types, being in effect rules about rules, concerned with what primary rules allow or prevent individuals from doing, and comprising:

(a)  rules of recognition

(b)  rules of adjudication

1.  These confer legal validity and are used to determine the validity of primary rules, e.g.:

this approach would perhaps require further consideration in light of current European Union law (Factortame Ltd v Secretary of State for Transport (No. 2) [1991] 1 All ER 70).

2.  The secondary rule of recognition is the fundamental rule justifying the validity of the legal system, so in the United Kingdom it would be the rule that establishes that legislation is valid if it is made by the properly constituted parliamentary procedure and confirmed by the Crown (c.f. Kelsen’s grundnorm section 4.5.2).

3.  These in themselves are not always adequate explanation, however, as there are other recognised ways of making law, e.g.:

4.  They are rules about rules, concerned with what primary rules allow or prevent individuals from doing.