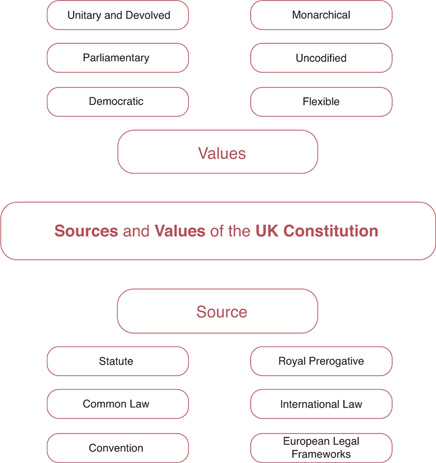 1.1 What is a constitution?

The constitution of a State would be expected to:

1.1.3 In a narrow sense, a constitution could be defined as a particular document (or series of documents) setting out the framework and principal functions of the organs of government in a particular State. Such a constitution will have, as Wade describes, ‘special legal sanctity’, meaning that it is the highest form of law in the State.

1.1.4 The majority of States have such a constitution, against which all other laws are measured. Should such laws fail to conform to the constitution, they may be declared unconstitutional by the courts.

1.1.5 The United Kingdom does not have a constitution that is the highest form of law since its constitutional principles can be amended by the passing of ordinary legislation – a consequence of the principle known as parliamentary supremacy, or parliamentary sovereignty (discussed in Chapter 3).

1.2.1 Constitutions can be classified in a number of different ways. We often talk of ‘written’ (codified) or ‘unwritten’ (uncodified) constitutions.

1.2.2 This has been the traditional way of classifying a constitution. In many examples, constitutions are described as being written or unwritten. This is too simplistic an explanation. It is more accurate to describe constitutions as codified or uncodified.

1.2.4 An uncodified constitution is one where the constitutional rules exist, and indeed may be written down in legislation, but there is no one source that can be identified.

1.2.5 The United Kingdom is one of the few major countries in the world not to have a codified constitution. Consequently, the sources of the UK constitution are varied and include, for example, statute, common law and conventions.

1.2.6 In modern constitutional terms the desire to create a codified constitution will often be the result of some significant event, such as, for example:

1.2.7 The United Kingdom has suffered no major historical or political event that has necessitated the creation of a codified constitution. There have nevertheless been significant constitutional events such as, for example:

1.2.8 However, all of these events were responded to or anticipated through parliamentary means; by the passing of ordinary legislation such as, for example:

Hence the United Kingdom’s constitution has evolved over time and remains uncodified.

1.2.9 Constitutions can also be classified as ‘rigid’ or ‘flexible’ constitutions. This way of classifying a constitution was first suggested by Lord Bryce in the late 19th century.

1.2.10 F or example, the United States has a rigid constitution that cannot be amended by the passing of an ordinary piece of legislation (an Act of Congress). A special procedure has to be followed, which requires there to be:

A further example: In the Republic of Ireland, a Bill passed by both Houses of Parliament, a majority of votes in a referendum and the assent of the President are required to change the constitution.

1.2.11 A constitution can also be described as a ‘unitary’ or a ‘federal’ constitution. This description rests on the way that law-making bodies or institutions (sometimes known as ‘organs of the state’, ‘state organs’ or simply ‘organs’) are distributed throughout the country as a whole.

1.3 Essential elements of the UK constitution

The key aspects of the UK’s constitution can be classified as:

1.3.1 Uncodified (or unwritten) – The United Kingdom does not have a codified constitution since there is no single document or series of documents that contain the constitution.

1.3.2 Unitary – The United Kingdom is a union of once separate countries but operates a unitary rather than federal system. The Parliament, sitting at Westminster, has full legislative supremacy but has granted considerable self-government through the process of devolution to:

However, the arrangements preserve the unlimited power of Parliament to legislate for the devolved regions and to override laws made by any of the devolved bodies:

1.3.3 Flexible – The constitution is flexible because technically all laws relating to it can be enacted, repealed and/or amended by Parliament using the same procedure, i.e. the passing of an ordinary Act of Parliament.

However, relatively recent modification to this traditional doctrine in the UK constitution with changes to parliamentary supremacy (also known as ‘parliamentary sovereignty’) should be noted.

1.3.4 Monarchical – The Queen is the Head of State and succession to the throne is based on the hereditary principle. However, by convention (see Chapter 4) the Queen exercises her constitutional powers only on the advice of her Ministers and, in many cases, the powers are in fact exercised by Ministers in her name.

1.3.5 P arliamentary supremacy or ‘sovereignty’ – Parliament is supreme (or ‘sovereign’) and can make or unmake any law and legislate on anything it wishes. In theory, no Parliament can be bound by its predecessors or bind its successors. (This principle and the limitations now imposed on it by, e.g., membership of the European Union and the European human rights law system are discussed in detail in Chapter 6 and Chapter 7 respectively.)

1.3.6 Bicameralist – The United Kingdom has a legislative body known as Parliament, which is composed of two chambers. These two chambers are known as the House of Commons (the lower House) and the House of Lords (the upper House).

1.3.7 Democratic – The House of Commons has a membership that is directly elected at least every five years. The political Party that wins the majority of seats in the House makes up the Government.

The leader of that political Party is then appointed by the Queen to be the Prime Minister, who in turn nominates the Ministers of the Government who are responsible for departmental activities and are accountable to Parliament. (The electoral system is discussed in Chapter 9.)

1.4 Should the UK constitution be codified?

1.4.1 The advantages of an uncodified constitution such as that of the United Kingdom include the following:

1.4.2 The disadvantages of an uncodified constitution include the following:

1.4.3 Since 1997 the UK’s constitution has undergone the most far-reaching reform since the 19th century. The reforms, whilst not all necessarily completed, could move the United Kingdom away from a traditional unitary state with an unwritten constitution and a sovereign Parliament.

1.4.4 This is partly because the constitution is increasingly being reduced to writing/codified. For example:

1.4.5 In addition to this, the doctrine of parliamentary supremacy has been modified by the supremacy of European Community law (see Chapter 6) and the incorporation of the European Convention on Human Rights by the Human Rights Act 1998 (see Chapter 7). In the context of the effect of membership of the European Union on the supremacy of Parliament, we can see a distinct modification of the traditional doctrine in that implied repeal no longer operates for certain important statutes. These have been called ‘constitutional statutes’ (see 1.6 for further discussion).

1.4.6 The Constitutional Reform Act 2005 provides for moves towards a more formal separation of executive, legislative and judicial powers (see Chapter 2 for the ‘separation of powers’).

1.4.7 Also, the process of devolution for Scotland, Wales and Northern Ireland, whilst not formally affecting the unitary character of the constitution, has created a system that the sovereign Westminster Parliament is unable to undo in practice (see Chapter 3 on parliamentary sovereignty).

1.4.10 Finally, the actual effectiveness of a constitution against abuse of power depends on the willingness of the organs of the State to comply with it, the ability of the courts to enforce it and the people to abide by it, regardless of whether it is codified or uncodified.

1.4.11 In 2007 the Government published a Green Paper entitled ‘The Governance of Britain’. The proposals in the Green Paper included discussion of ideas to:

1.4.12 The idea of a British Bill of Rights was explored further by the Joint Committee on Human Rights and was contained within a Green Paper, ‘Rights and responsibilities: developing our constitutional framework’ published in March 2009. However, no legislation was produced prior to the May 2010 General Election.

1.4.14 Some of the statutes introduced by the Coalition Government between 2010 and 2015 are addressed at 1.6, on the issue of the concept of constitutional statutes.