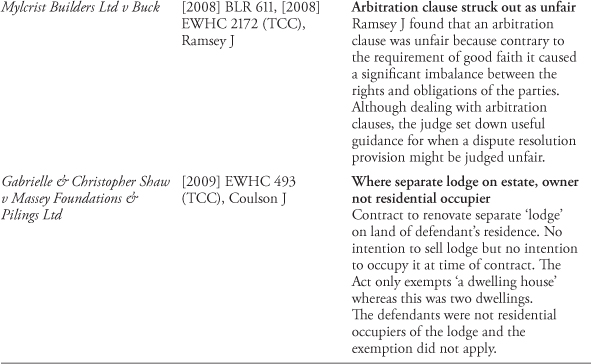 1.02 The Local Democracy, Economic Development and Construction Act 2009 (‘the 2009 Act’) makes certain amendments to the 1996 Act but makes no changes to ss. 104 and 105 and retains the exemption for contracts made with residential occupiers at s. 106. The only change introduced to these provisions by the 2009 Act concerns the ability of the Secretary of State to make an order excluding any description of construction contract from the operation of the Act. The original provision at s. 106(2) has been deleted and replaced with a new s. 106A whereby the power is now divided between the Secretary of State, the Welsh Minister, and the Scottish Ministers in relation to their own territories.1

(2)What Is a Construction Contract?

1.04 Section 104(2) broadens the categories of construction contract to include professional service contracts. Construction contracts thus also include an agreement to do architectural, design, or surveying work3 or to provide advice on building, engineering, interior or exterior decoration, or on the laying-out of landscape, subject to the overriding caveat that activities described in s. 104(2) must be ‘in relation to construction operations’4

Contracts Affected by the 1996 Act

1.07 It was decided in Christiani & Nielsen Ltd v Lowry Centre Development Company Ltd (2000)’10 that a contract entered into after the commencement of the Act but taking effect from an earlier date before the commencement of the Act was nevertheless governed by the provisions of the Act. The date a contract is executed is not necessarily the date it is entered into. In Atlas Ceiling & Partition Co. Ltd v Crowngate Estates (Cheltenham) Ltd (2002)11 a contract was signed in April 1998 but was not entered into until certain outstanding matters were resolved at a later date, thus bringing the agreement within the scope of the Act.

Contracts Affected by the 2009 Act

1.08 The amendments will apply to construction contracts entered into after the 2009 Act came into force in the respective territories.12 The new provisions apply from 1 October 2011 in England13 and Wales14 and, from 1 November 2011, in Scotland.15 The location of the construction operations determines which commencement order applies. The 1996 Act continues to apply to contracts made after 1 May 1998 and before the commencement of the new Act.

Changes to Existing Contracts after Commencement of the Act

1.09 After the 1996 Act was passed there were a number of cases about whether the Act applied to contracts made before the Act came into effect but varied afterwards. The same principles will apply to the application of the 2009 Act and so are considered here. In Earl’s Terrace Properties Ltd v Waterloo Investments Ltd (2002) (Key Case)16 it was decided that where parties entered into a construction contract prior to 1 May 1998 but varied the contract after that date, the variation would usually not bring the contract within the scope of the Act. However, where the variation is capable of being construed as a construction contract in its own right, then the variation itself could attract the provisions of the Act. Judge Seymour in Earls Terrace left open the question as to whether a variation made to a contract outside the provisions of the Act can ever have the effect of bringing the whole contract within the statutory scheme. In contrast, a novated contract is a new agreement so that a contract made before 1 May 1998 could fall within the scheme of the Act by virtue of a novation agreement made after 1 May 1998; Yarm Road Ltd v Costain Ltd (2001).17

1.11 The 1996 Act applies to construction contracts entered into by the Crown, save for where the contract is made by Her Majesty in a private capacity, and to contracts made by the Duchy of Cornwall. Special provisions are made regarding how the Crown or Duchy is to be represented in any adjudication proceedings.19

Contracts for the Carrying Out of Construction Operations

1.14 The common ingredient in the three subsections of s. 104(1) is the ‘carrying out of construction operations’ which suggests that only those individuals who have a direct connection with the work itself are intended to be caught. It is submitted that contracts which have a more indirect role in arranging for the performance of construction operations, such as certain funding agreements, are not intended to be covered by this provision. This is consistent with the fact that finance agreements and development agreements are expressly excluded from the ambit of the Act pursuant to S1 1998 648.

1.15 Professional services contracts are brought within the ambit of the Act by s. 104(2). There are two limbs to s. 104(2). First the contract must be one to perform work of the character described in sub-ss (a) or (b) and secondly that work must be work ‘in relation to construction operations’. Consequently a construction contract includes an agreement (a) to do architectural, design, or surveying work, or (b) to provide advice on building, engineering, interior or exterior decoration or on the laying-out of landscape, where such agreements are ‘in relation to construction operations’.

1.17 Pursuant to s. 104(2) a professional may seek adjudication for outstanding fees,25 and professional negligence allegations can be submitted to adjudication, as was the case in Gillies Ramsay Diamond v PJW Enterprises Ltd (2002).26

Agreement Relating to Construction Operations and Other Matters

1.19 This means an adjudicator may have jurisdiction in a statutory adjudication to determine disputes over part of a contract but not over other issues. It is not difficult to see how this could give rise to difficulties if, for instance, an adjudicator was asked to decide a dispute about payment which concerned both construction operations and other matters and the issues could not be severed. In North Midland Construction plc v AE&E Lentjes UK Ltd (2009)28 Ramsey J suggested that in such a situation it might be impossible to apply the adjudication provisions of the Act to only part of a dispute so that ultimately the Act could not be applied at all.29 In Cleveland Bridge (UK) Ltd v Whessoe-Volker Stevin Joint Venture (2010)30 the adjudicator’s decision concerned matters covered by the Act and matters exempt under s. 105(2). On the facts the decision could not be severed with the result that the entire decision was unenforceable.

1.20 In many cases however contracts will contain a written agreement to adjudicate disputes under that contract, such as is to be found in many standard forms. These agreements rarely differentiate between the type of dispute that may or may not be adjudicated, and the problem identified above will not arise. In particular cases this may mean the contractual adjudication provisions are wider than required by statute but this will not undermine their efficacy as the parties are entitled to agree to adjudicate whatever matters they choose. As a consequence an adjudicator acting in an adjudication brought under a contractual adjudication provision is unlikely to have to consider the difficulties raised by s. 104(5) of the Act.

1.21 A contract of employment (within the meaning of the Employment Rights Act 1996) is not a construction contract for the purposes of the Act.31

Agreements to Vary, Supplement, or Settle a Construction Contract

1.23 In general terms, if an agreement is a variation to the original construction contract a dispute arising thereunder will fall within the scope of the dispute resolution provisions of the construction contract. Consequently it will attract the adjudication provisions of the Act or any express adjudication clause that is contained in the contract.

1.27 An adjudicator is entitled to consider whether the dispute referred has been compromised by a stand-alone settlement agreement but as that issue goes to his jurisdiction he cannot make a binding decision on this point unless given power to do so by the parties (this topic is discussed in more detail in Chapters 5 and 9). The court can consider the question ofjurisdiction afresh: Quarmby Construction Co. Ltd v Larraby Land Ltd (2003).36 In the circumstances of that case the claim referred to adjudication had not been compromised by the settlement, the adjudicator had jurisdiction and his decision was valid.

1.28 It is a question of construction whether a collateral warranty is a construction contract within the meaning of the Act. It is thought that where such an agreement simply warrants compliance with a building contract, as is commonly the case in standard-form warranties between employer and subcontractor, that is not an agreement for the carrying out of construction operations. It would be odd if the Act operated to imply the payment provisions of ss. 109-11 into such a warranty, where the original agreement has no obligations as to payment.

1.30 Held: The Deed of Variation concerned payment issues alone and was not itself a construction contract within the meaning of the Act. In those circumstances Parliament would not have intended that its effect would have been to bring the entire contract within the scope of the Act when it was not covered by the Act when entered into by the parties (at paragraphs 26 and 28).

1.31 Facts: Fence Gate engaged J. R. Knowles to carry out architectural and surveying works in relation to a dispute between Fence Gate and its building contractor. The contract contemplated that litigation support services might be required. J. R. Knowles prepared a report on a defective kitchen floor and subsequently were called to provide witness-of-fact evidence in the arbitration between Fence Gate and its building contractor. An adjudicator awarded J. R. Knowles fees for both services. Fence Gate then applied to the court to challenge the decision on the ground that the adjudicator lacked jurisdiction on the basis that the giving of factual evidence in an arbitration was not a service ‘in relation to construction operations’ and so was not covered by the 1996 Act.

1.32 Held: The judge accepted that reporting back to the client of what was discovered during a survey was an essential part of the service he was asked to provide to the client, that it should be regarded as part of the survey work, and thus included in the ‘doing’ of the work. However the judge found that giving of factual evidence was a significantly different activity from actually surveying the property or reporting back to the client and was not incidental thereto. Likewise assisting at an arbitration was not advice in relation to construction operations but rather was advice in relation to the legal proceedings. The judge rejected the argument that giving of factual evidence fell within the words of s. 104(2)(a) of the Act because it was the ‘doing’ of architectural or surveying work itself that was encompassed by that provision.