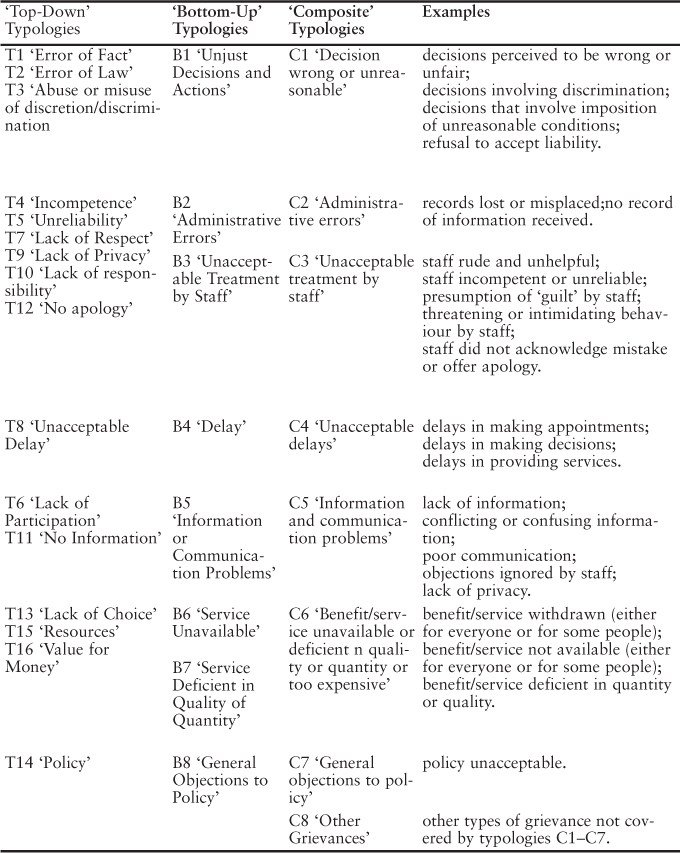 tribunals etc, which can be invoked when these experiences are experienced as problematic and people wish to challenge them.2 However, there have, as far as I am aware, been no empirical studies which have taken an overview of the entire spectrum of people’s administrative experiences.

One consequence of this is that there is an absence of any comparative data on administrative problems that people experience in dealing with ‘government’ in its many manifestations, or on administrative grievances, ie, on those experiences that are felt to be unjust or unfair. We do not, for example, know which government departments are experienced as most problematic and by whom. Likewise, we lack any systematic understanding of the nature of the problems that people experience and whether, and if so how, these problems vary from one administrative agency to another. Similarly, we do not know whether the mechanisms for challenging experiences and correcting decisions that are felt to be unjust or unfair are accessible or effective.

This chapter focuses on the first stage of a programme of research that is attempting to fill this gap in our understanding. The long-term aims of this research are, by means of a survey of the adult population, to

— determine which government departments are experienced as most problematic and by whom;

— demonstrate how these problems vary from one government administrative agency to another; and

— assess how accessible and how effective the mechanisms for pursuing administrative grievances are for those who need to use them.

The vocabulary used above, in particular the references to ‘problems’ and ‘grievances’, is consistent with the usage developed by Felstiner, Abel and Sarat in their ‘naming, blaming, claiming’ model of disputes.3 In their sequential or processual model of disputing behaviour, ‘injurious experiences’—which we refer to as ‘problems’—precede ‘grievances’, ‘grievances’ precede ‘complaints’, and ‘complaints’ precede ‘legal remedies’. The logical steps along the path involve the recognition of particular kinds of experience as injurious (‘naming’), the identification of the problem as a grievance for which some individual or institution is held to be responsible (‘blaming’); the confrontation of the responsible individual or institution with the grievance (‘complaining’); and finally, if the response is deemed to be unsatisfactory, the pursuit of a legal remedy. People may seek information or advice at several points, eg when they recognise that they have a problem, when they blame someone else for it and it has become a ‘grievance’, when they take up the matter with body in question and it becomes a ‘complaint’, and/or when they seek redress.4 At the outset, seeking information or advice may be instrumental in persuading people that they have a grievance; later on, it may help them to decide whether to pursue it and, if so, whether to complain to the body in question and/or to pursue a legal remedy. If the outcome of the complaint or appeal is successful, or if it is unsuccessful but the person concerned is prepared to accept it, the grievance will have been resolved. However, if the outcome is unsuccessful and the person concerned does not accept it, he or she may continue to have a grievance.

The programme of research outlined above was prompted by the publication of Hazel Genn’s two ‘Paths to Justice’ studies—one in England5 and the other in Scotland6—which set out to investigate how people use the legal system to deal with their problems. In both these studies, ‘justiciable problems’ were defined as problems that raise legal issues, whether or not they are recognised as such and whether or not any action is taken to deal with them. The range of justiciable problems was confined to civil (as distinct from criminal law) and was drawn up on the basis of focus group discussions with solicitors, advice agencies and members of the public. They comprised 16 broad categories, which included employment, divorce, money issues, health, injury, immigration, property, discrimination issues etc, and over 60 sub-categories which, taking employment problems as an example, referred to losing a job, problems associated with getting paid or receiving an occupational pension, other rights at work, changes to terms and conditions of employment, harassment at work and other disciplinary procedures.

Both studies were based on large-scale survey research. In a screening interview, respondents were asked to report all the justiciable problems that they had experienced, irrespective of their seriousness, over the last five years. Respondents were deemed eligible for the main interview if they had experienced one or more of these problems and had either taken some action to deal with it or had not taken any action for one of a number of ‘good’ reasons. Those who had not regarded the problem as important enough to justify taking action and those who were not in dispute with another party were excluded. However, respondents were automatically included if they had been involved in divorce proceedings, had had legal action taken against them, had been threatened with legal action over a disagreement about something, or had started or considered starting legal proceedings.

In total, about 40% of the 4125 individuals who answered the screening survey in England and 26% of the 2684 adults who did so in Scotland, reported having experienced one or more ‘justiciable problems’ during the past five years. Follow-up interviews with 1134 individuals who had experienced one or more ‘non-trivial justiciable problems’ during the past five years in England and with 472 individuals in Scotland who had done so in Scotland were then carried out and, for each type of problem, the action that was taken or the reasons for taking no action were recorded. The problems people encountered are set out in Table 1 below. It is clear from the table that the pattern of problem types about which respondents were interviewed in the main survey broadly reflects the pattern reported in the screening survey, and that the pattern of problem types encountered in Scotland is very similar to that found in England.

Although these two studies have undoubtedly enhanced our understanding of the ways in which people deal with legal problems when they encounter them, it is striking how few of the problems involved public law disputes, ie disputes between the citizen and the state. They dealt primarily with private law disputes, ie disputes between two private parties, such as disputes between husband and wife, employer and employee, landlord and tenant, and contractor and consumer. This preponderance of private law disputes is clearly at odds with the experiences of many advice agencies whose caseloads are heavily weighted towards public law disputes in the fields of taxation, social security, housing, immigration control etc. It is not clear why this should be the case but it may well have resulted from the fact that people are more likely to think of the problems that they experience in dealing with government departments and other public bodies as ‘administrative problems’ rather than ‘legal problems’. This is not all that surprising since lawyers have little expertise in dealing with such problems, and few people would think of consulting a lawyer about them.

Table 1: Distribution of ‘Justiciable Problems’ in England and Scotland 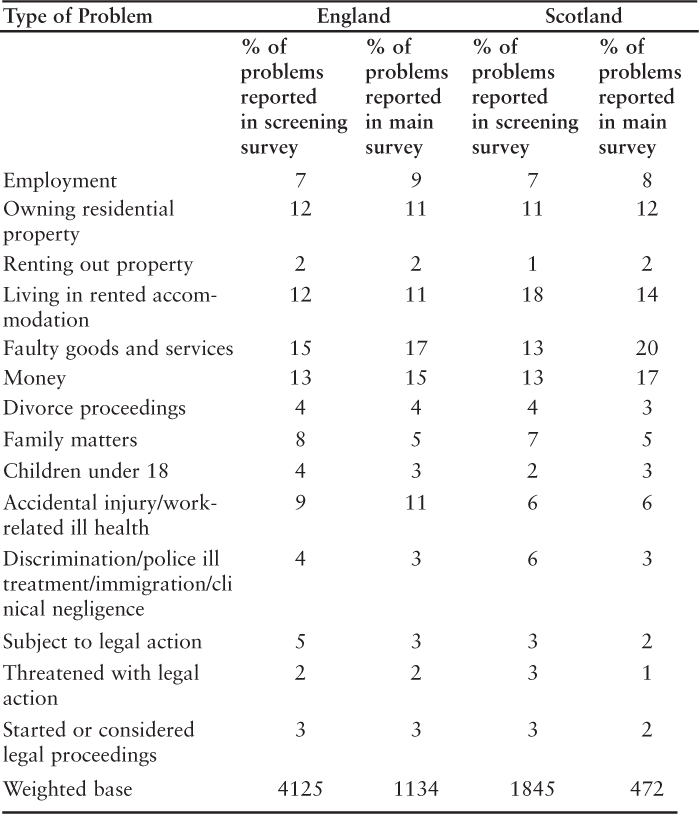 The research described in this chapter was designed to remedy the fact that more is known about disputes between private parties than about disputes between the citizen and the state. Adopting the model used in the Paths to Justice studies,7 our original idea was to conduct a large-scale national survey of people who had experienced one or more ‘non-trivial administrative problems’ in their dealings with ‘government’ over the last five years, and then to question them about how they had dealt with them. However, survey research on this scale is extremely expensive. The Nuffield Foundation, to which an application for funding had been made, took the view that, before committing itself to a major outlay of expenditure, some development work needed to be undertaken. In particular, it took the view that a typology of grievances, which could be used to classify the problems that people experience in their dealings with government and to distinguish those problems that are justiciable from those problems that are not, with a view to excluding the latter from a survey of administrative grievances, needed to be developed. Because we were unable to locate any well-established typologies of grievances that we could take off the shelf and adapt for use in our own study, we had to develop a typology from scratch.

C. CONSTRUCTING A TYPOLOGY OF GRIEVANCES

Instead of choosing between a ‘top-down’ and a ‘bottom-up’ approach, an attempt was made to combine them and, by so doing, to produce a robust typology that maximises the strengths and minimises the weaknesses of the two approaches. Whether the ‘top-down’ typologies with which administrative lawyers and experts in public administration are familiar can be combined with the ‘bottom up’ typologies that members of the public use or whether this constitutes an attempt to ‘reconcile the irreconcilable’ is really the nub of the issue.8 We thought that the attempt was worth making but whether it has been successful is quite another matter. An advisory committee of experts in the field9 helped to develop and refine a ‘top down’ typology constructed from a review of the literature in administrative law and public administration, and the National Centre for Social Research conducted a programme of fieldwork with the dual aim of testing the ‘top-down’ typology and developing a ‘bottom-up’ typology.