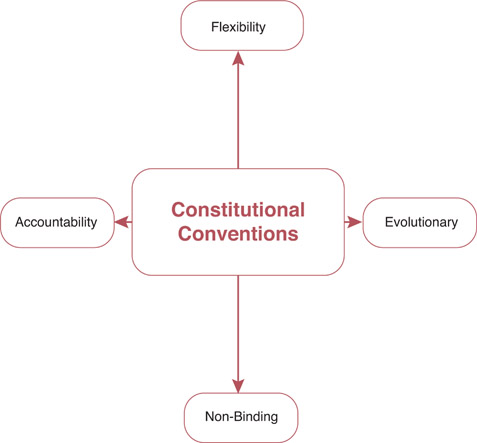 4.1.1 A significant number of important constitutional principles are not found in either statute or common law and are unwritten. They are called conventions.

4.1.2 Many definitions of conventions can be found including, for example:

4.1.3 Perhaps the most readily useable definition of a constitutional convention is that provided by Makintosh – that such conventions are ‘generally accepted descriptive statements of constitutional and political practice’.

4.1.5 Conventions therefore are often evolutionary and develop through usage. There is no prescribed time or duration required to establish the existence of a convention. This, combined with their unwritten nature, means that it can be very difficult to identify whether a particular convention exists.

4.2.1 Two prominent examples of a constitutional convention are about the power exercised by the Monarch:

4.2.2 Two of the most important constitutional conventions, designed to secure executive accountability, are individual and collective ministerial responsibility (see Chapter 10 for details).

4.2.3 Some conventions can be deliberately created, rather than emerging from practice. One example would be the ‘Sewel Convention’, created in 1999, which prevents Parliament from legislating in matters that have been devolved to the Scottish Parliament without obtaining its consent (for detail on devolution see Chapter 8).

4.2.4 Conventions offer the constitution flexibility. The principles provided in the form of conventions often develop because of a desire to avoid formal change through the production of legislation. Hence conventions can be helpful in easing constitutional change in an informal way, for example:

4.3.1 The most significant characteristic of constitutional conventions is that they are not legally binding.

4.3.2 Dicey stated that conventions may regulate conduct but ‘are not in reality laws at all since they are not enforced by the courts’;

4.3.3 Marshall and Moodie describe conventions as ‘rules of constitutional behaviour which are considered to be binding by and upon those who operate the constitution but which are not enforced by the law courts’.

4.3.4 However, the courts may recognise the existence of a convention when coming to judgment. For example:

4.3.5 Convention cannot crystallise into law: Reference Re the Amendment of the Constitution of Canada (1982). Therefore the only way a convention can become legally binding is if it is put into statutory form. Examples of statutes incorporating former conventions include the Statute of Westminster 1931 and the Parliament Act 1911.

4.3.7 Therefore, conventions are generally followed not because of legal consequences but because of political difficulties that may arise otherwise, if they were not followed.