Co-ownership of land after 1996: trusts of land

Co-ownership of Land after 1996; Trusts of Land 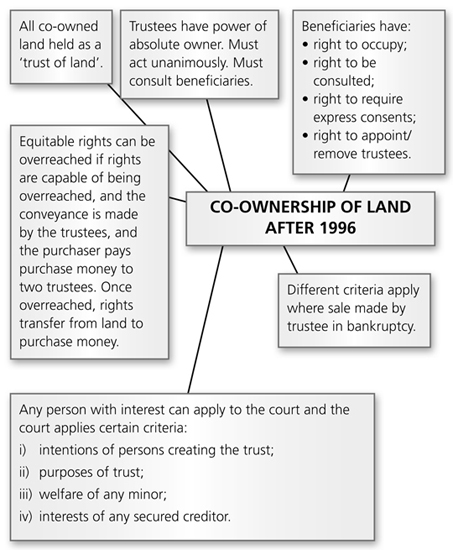 9.1 Characteristics of a Trust of Land

3.  The legal estate can only be held by persons who are over 18. Persons under 18 can only hold an equitable estate in land.

4.  The maximum number of trustees of the legal estate is limited to four (s34 LPA 1925). If there is an attempt to transfer the legal estate to more than four then it will be held by the first four eligible to hold a legal estate named on the conveyance.

5.  The equitable estate can be held either as a joint tenancy or as a tenancy in common.

6.  The equitable estate determines the distribution of the beneficial interests.

7.  There is no limit on the number of persons who can hold an equitable estate.

1.  Prior to the 1996 Act land held in concurrent ownership was either held in a strict settlement or under a trust for sale.

3.  The 1996 Act prevents the creation of any further strict settlements in land and, today, successive interests in land can only be created under a trust of land.

9.3 Powers of the Trustees of Land

1.  The trustees of land have all the powers of absolute owner. Many of the powers can be expressly excluded.

2.  The powers of the trustees must be exercised unanimously or not at all.

3.  The trustees have wide powers to sell, lease and mortgage the legal estate in the trust land.

9.4 Rights of the Beneficiaries Under a Trust of Land

1.  The right to insist that express consents be obtained – under s8 there can be a requirement in the trust instrument for consents to be obtained before sale or other disposition.

2.  The right to be consulted:

Under s11 the trustees have a duty to consult the adult beneficiaries so far as is practicable.

The duty may be restricted by the trust instrument or the court – there is no duty to consult a beneficiary who is also a trustee.

It is only a duty to consult – there is no obligation to comply with their wishes.

The trustees should comply with the wishes of the majority if it is in the general interest of the trust.

any beneficiary entitled to an interest in possession is entitled to occupy the trust property;