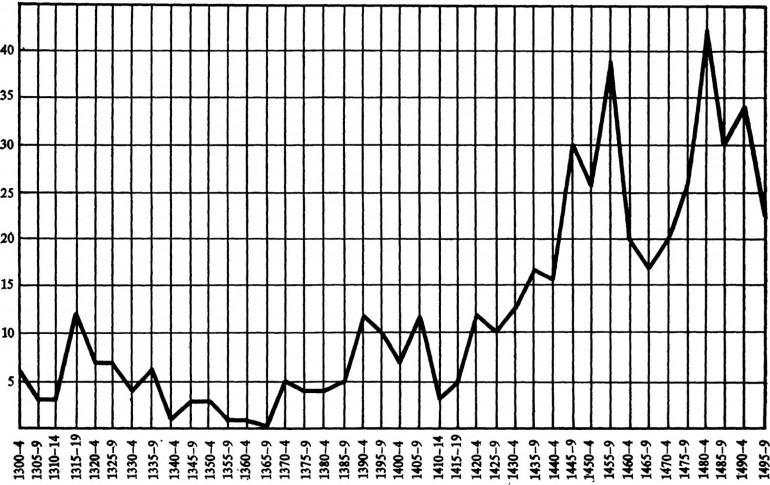 In comparison with the mass persecution of following centuries, the witch trials of the years 1300–1500 were few and sporadic. There was seldom a sustained effort in any one community to exterminate witches, as occurred frequently in the sixteenth and seventeenth centuries. Even in years when there were multiple trials, they generally occurred in widely separate towns. Yet historians have rightly viewed the fourteenth and fifteenth centuries as witnessing the initial stages of the European witch craze. It was during this period that prosecution of witches first gained real momentum—gradually and fitfully, as indicated on the graph. And the intensified hunts of the sixteenth and seventeenth centuries can be explained only as outgrowths of an earlier obsession.

Even during the period 1300–1500, though, one must distinguish various stages of prosecution. On the one hand, the rate of frequency changed sharply; on the other, the nature of the accusations altered significantly. Bearing in mind both the intensity and the form of witch hunting, one can perceive four broad periods during the fourteenth and fifteenth centuries, extending roughly from 1300 to 1330, from 1330 to 1375, from 1375 to 1435, and from 1435 to 1500.

During the first period, the rate of prosecution was low indeed. For all of Europe, the trials occurred on an average of roughly one each year. Slightly more than half of these come from France; among other countries, only England and Germany had significant numbers of witch hunts.1

Probably the most remarkable feature of the trials during this first phase is their political character. Almost two-thirds of them involved prominent ecclesiastical or secular figures, sometimes as suspects but most commonly as sorcerers’ victims. The political climate was ideal for fostering the obsession that leaders everywhere were being attacked through the surreptitious weapons of sorcery. In France, the Capetian dynasty had lost the blessing of longevity which had favored its members for more than three centuries. In the early fourteenth century the last four Capetian kings died, all within a space of twelve years; it was easy to imagine that they had succumbed to bewitchment. Suspicions of this kind had arisen earlier, as when the nephew of the bishop of Bayeux went to his death in 1278 for allegedly attempting sorcery against Philip III.2 In the early years of the fourteenth century, however, the charge became virtually habitual as an explanation for deaths within the royal family, or as a credible excuse for prosecution among political rivals. The trial of the Templars no doubt helped to heighten fear of witchcraft, though the Templars were accused of diabolism rather than sorcery.3 It was during the course of their famous trial, in any event, that the bishop of Troyes stood trial for image magic and invocation of the devil—practices which had supposedly succeeded in bringing the demise of the queen, though they had failed in their further objective of killing other members of the French court.4 A few years later Enguerrand de Marigny was executed along with a female associate for using image magic against Louis X and Charles of Valois.5 And with the rapid succession of monarchs who fell ill and died young, the charge arose seven more times within the next few years.6

For trials extending to more than one year, the year of inception is used. Numbers are based on the Calendar of Witch Trials at the end of the book. 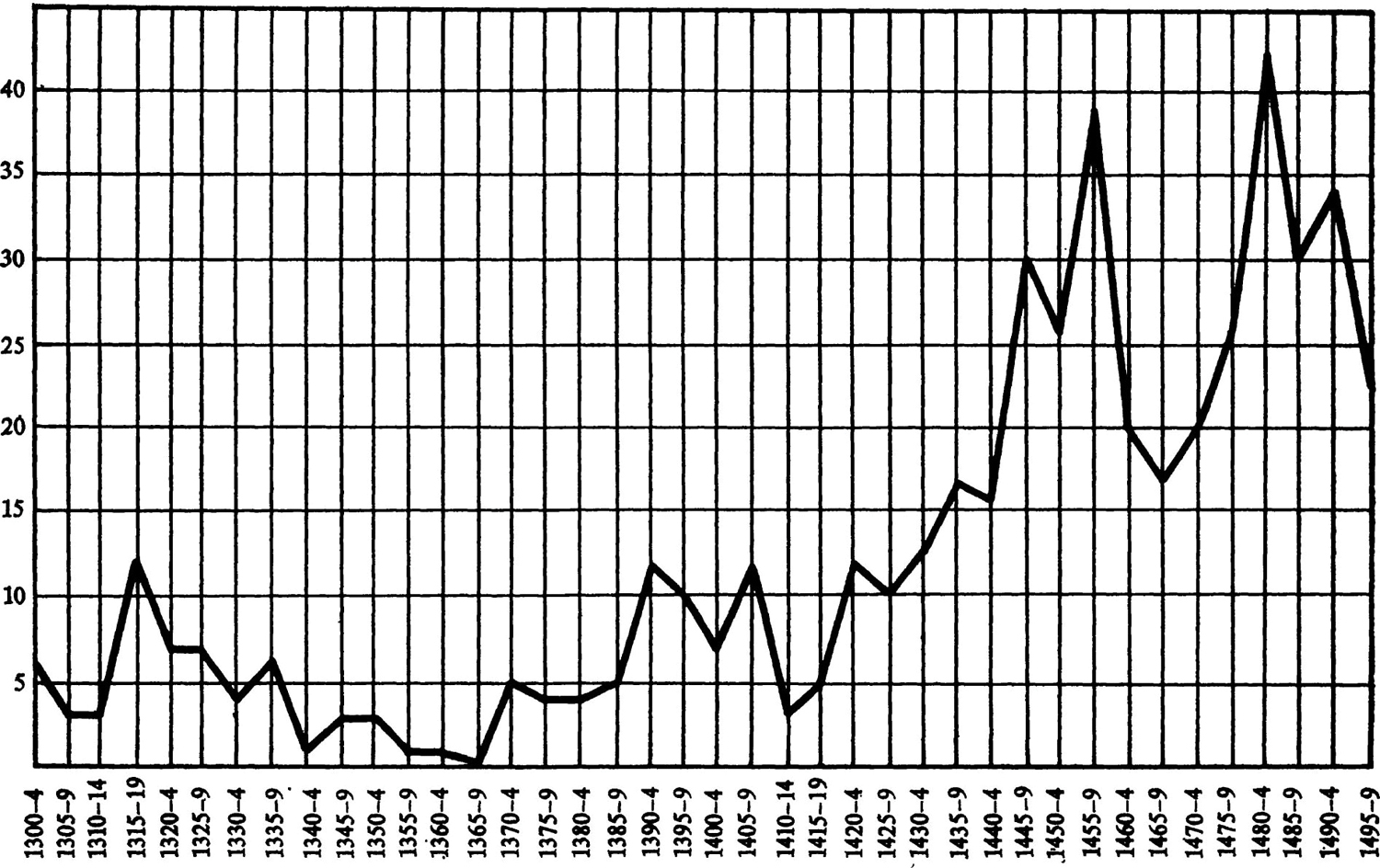 The papacy was not subject to the same difficulties. Pope Clement V was sickly for much of his pontificate, but he reigned from 1305 to 1314, which was a respectable length of time considering that he, like most popes, was elected at an advanced age. And many churchmen would have been gratified if his successor John XXII had lived less than his eighteen years after election to the papacy. Yet the papal court was ridden with factionalism, which generally followed national lines: the Italian cardinals, resentful of French domination in the Avignonese papacy, were openly hostile to the Frenchmen, while the latter group was divided by the formation of a specifically Gascon faction. It was the animosity of theśe groups that led to a two-year vacancy between the death of Clement V and the election of John XXII; no one faction was powerful enough to secure the election of its own candidate. Nor did hostilities between Italians and Frenchmen cease altogether when a French cardinal at last became John XXII. The atmosphere of contention fostered lasting suspicion. In addition, John appears to have been naturally superstitious, and given to such practices as keeping a magical snake-skin to detect poisoned food and drink.7

Through most of his pontificate John was active in prosecution of sorcerers and invokers of demons. The year after his election, Bishop Hugo Géraud of Cahors went to the stake for involvement in a conspiracy against the pope and certain cardinals. The bishop and his accomplices had allegedly employed wax images and other magical objects to bring about the pontiff’s ruin; after the plot was detected, various clerics at the papal court confessed under torture that they had dabbled in sundry forms of witchcraft.8 Two years later, the Franciscan Bernard Délicieux, earlier a harsh critic of inquisitorial procedures, was brought to trial on charges of witchcraft. He was acquitted of one charge, that of attempting to bewitch one of John XXII’s predecessors through drinks and powders. But on the grounds of possession of magical books he was sentenced to life imprisonment.9 On three occasions—in 1318, 1320, and 1326—Pope John took initiative in the investigation of those persons in southern France who were forming pacts with the devil, employing image magic, abusing the sacraments, and committing other such offenses.10 In a trial with clear political implications, the archbishop of Milan and an inquisitor charged that Matteo and Galeazzo Visconti, two of John’s main political adversaries, had entered a pact with the devil, had invoked the devil on numerous occasions, and had used sorcery against the pope.11 Meanwhile the pope issued commands to the bishop of Ancona and an inquisitor, directing them to prosecute other political enemies on the charges of idolatry, heresy, and diabolism.12 And on two occasions, the pope aided in investigation of sorcery directed against the French kings.13

Likewise, the English monarch Edward II, whose weak hold on the throne led to deposition in 1327, found witches among his opponents. Even in the early years of his reign, a rebel was found who had allegedly made a pact with the devil to obtain the crown.14 Less directly affecting the throne was the trial of Edward I’s treasurer and minister, Walter Langton, bishop of Coventry. Charged before the pope of having formed a pact with the devil and kissed him on the posterior, Langton received the king’s support, and ultimately obtained acquittal.15

The best known political trials of the early fourteenth century are those of the Templars and of Dame Alice Kyteler. The Templars, tried on the urging of the French crown, were convicted of charges that were certainly exaggerated, if not wholly fabricated. In addition to sodomy, blasphemy, and other species of immorality, they are supposed to have venerated the devil in the guise of an animal named Baphomet.16 Whereas the motives in many political trials are only vaguely ascertainable, the desire of Philip IV to confiscate the Templars’ abundant wealth is notorious. Almost as apparent were the political motives in the trial of Alice Kyteler, an aristocratic lady of Ireland.17 This woman had family relations with numerous political leaders, and the best accounts of her trial explain it as largely an outgrowth of feuds among these aristocratic families.18 Her accusers charged that she had killed three husbands and reduced a fourth to debility through sorcery; she had furthermore maintained an imp named Robert Artisson, and engaged in diabolical rituals.

The prominence of the sorcerers and victims in these trials is of the utmost importance. Though in some instances the accusers may have raised the charges cynically as ways of undermining their opponents, in the majority of cases the charges were no doubt based on sincere belief in the reality of witchcraft. Yet the fact that these trials reflect concern with sorcery and invocation is less important in the long run than the likelihood that they intensified this concern throughout western Europe. The notoriety and suggestive force of these episodes may have been largely responsible for the gradual increase in witch prosecution through the following generations.19

Apart from the political character of prosecution during the first phase, its most significant feature is the mildness of the allegations. Sorcery was by far the most common charge; invocation was not so frequent, but was known; diabolism, though, was extremely rare, and even when alleged it was usually not described in great detail. Even in the trials of Walter Langton, the Templars, and Alice Kyteler, the depictions of devil-worship are less lurid than in later trials. Pope John XXII routinely spoke of pacts with the devil, yet did not specify whether these agreements led to diabolism or merely to invocation of the devil. One of the more elaborate cases was that of the Carmelite friar Peter Recordi, who was charged with a peculiar mixture of sorcery, invocation, and mild diabolism.20 On various occasions, Recordi had made five wax images and performed conjurations and invocation of demons over them. He had poured over these images poisons and blood extracted ‘in a terrible and horrible manner’ from a toad. He had then placed the figures on a table, covered them with a cloth, and sprinkled them with blood from his own nostrils, mixed with saliva, as an immolation to the devil. After this, he placed the images under the thresholds of women he wished to seduce. Through these means he had succeeded in seducing three women, and had he not been transferred to a new residence by his order he would have ensnared two more. After the images had accomplished their purpose, he cast them into the water, completing the ritual by sacrificing a butterfly to the devil. He had believed that such figures had power not only to constrain women, but to bring afflictions upon them if they refused his advances. To test their magical properties, he had once stuck one of the figures in the stomach, and blood oozed out. Such, in any event, were the charges brought forth. Yet even here the classic elements of diabolism that later became important, the Sabbath and all its attendant ceremonies, are absent.

Long before it appeared independently or in connection with sorcery, the charge of diabolism had been used in trials against heretics. No matter how rigorous their moral codes might be, medieval heretics such as the Cathars and Waldensians were believed to reject moral law entirely—a position known as antinomianism. They allegedly held nocturnal orgies, and in some instances were thought of as paying homage to the devil.21 In a few trials of the early fourteenth century charges of diabolism seem to have been made against heretics, in the specific form of Luciferanism. The basic premise of Luciferanism, if indeed anyone actually subscribed to the doctrine, seems to have been that Lucifer would eventually attain salvation, and would even rule over creation in place of the Christian God. Churchmen accused Luciferans of venerating the devil in underground assemblies. To be sure, in most instances the charge of Luciferanism is related only in chronicles, usually of questionable veracity. Thus it is not even fully certain that the accusation actually arose in the heresy trials, much less that it was accurate.22 In any case, the allegation was set forth a few times in the years 1300–30,23 though its importance was apparently minimal.