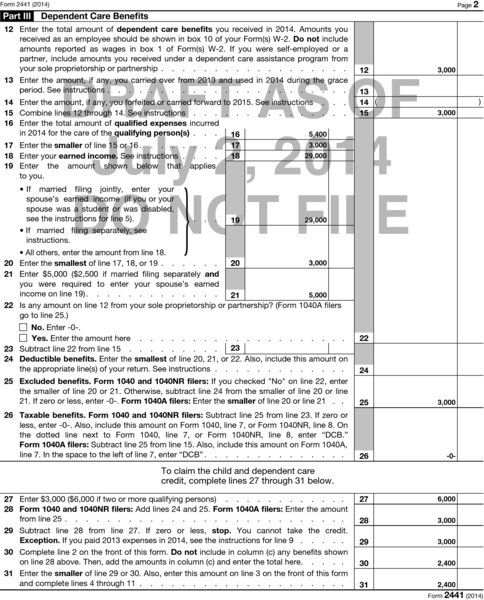 Ernst & Young LLP will update the Ernst & Young Tax Guide 2015 website with relevant taxpayer information as it becomes available. You can also sign up for email alerts to let you know when changes have been made.

A credit that directly reduces your taxes is available for certain child and dependent care expenses that enable you to work. The credit may be as much as $1,050 if you have one qualifying individual or $2,100 if you have more than one qualifying individual. The credit is designed to help ease the tax burden of persons who must work and who also have the responsibility for the care of children or disabled dependents and spouses. The credit is nonrefundable; that is, although it may be used to bring your tax liability to zero, any credit in excess of your liability is not refunded to you.

In general, to claim this credit, you must pay someone (other than a dependent) to care for a qualifying individual so that you can work or look for work. You must also have earned income from your work during the year and must have maintained a home for yourself and the qualifying individual for more than one-half of the year. This chapter spells out all the details.

You may have to pay employment taxes. If you pay someone to come to your home and care for your dependent or spouse, you may be a household employer who has to pay employment taxes. Usually, you are not a household employer if the person who cares for your dependent or spouse does so at his or her home or place of business. See Employment Taxes for Household Employers, later.

See chapter 40, What to do if you employ domestic help, for additional information.

This chapter discusses the credit for child and dependent care expenses and covers the following topics.

This credit should not be confused with the child tax credit discussed in chapter 35.

You may want to see:

Tests To Claim the Credit

These tests are presented in Figure 33-A and are also explained in detail in this chapter.

If a child turned 13 during the year, the child is a qualifying person only for the part of the year he was under age 13.

Your child and dependent care expenses must be for the care of one or more qualifying persons.

A qualifying person is:

Dependent defined. A dependent is a person, other than you or your spouse, for whom you can claim an exemption. To be your dependent, a person must be your qualifying child (or your qualifying relative).

Qualifying child. To be your qualifying child, a child must live with you for more than half the year and meet other requirements.

Person qualifying for part of year. You determine a person’s qualifying status each day.

For example, if the person for whom you pay child and dependent care expenses no longer qualifies on September 16, count only those expenses through September 15. Also see Yearly limit under Dollar Limit, later.

Tax Breaks and Deductions You Can Use Checklist

Child and dependent care credit. The tax law allows you a credit against your tax if you pay child and dependent care expenses under certain circumstances. For an expense to qualify for the credit, it must be an “employment-related” expense, meaning that it must enable you and your spouse to work or look for work, and it must be for the care of your child, stepchild, or foster child, or your brother or sister or stepsibling (or a descendant of any of these) who is under 13, lives in your home for over half the year, and does not provide over half of his or her own support for the year. You may also be eligible for the credit if you pay for the care of your spouse or dependent who is physically or mentally incapable of caring for himself or herself and lives with you for over half the year. To claim the credit, you and your spouse must file a joint return. Further, you must include the social security number of the qualifying individual and the caregiver’s name, address, and social security number (or ID number if it’s a daycare center or nursery school) on the form for Child and Dependent Care expenses (Form 2441). A daycare center must be in compliance with state and local regulations.

Individual taxpayer identification number (ITIN) for aliens. If your qualifying person is a nonresident or resident alien who does not have and cannot get a social security number (SSN), use that person’s ITIN. The ITIN is entered wherever an SSN is requested on a tax return. To apply for an ITIN, see Form W-7.

For additional information, you can also visit the ITIN page at www.irs.gov/Individuals/Individual-Taxpayer-Identification-Number-(ITIN).

An ITIN is for tax use only. It does not entitle the holder to social security benefits or change the holder’s employment or immigration status under U.S. law.

Adoption taxpayer identification number (ATIN). If your qualifying person is a child who was placed in your home for adoption and for whom you do not have an SSN, you must get an ATIN for the child. File Form W-7A, Application for Taxpayer Identification Number for Pending U.S. Adoptions.

Child of divorced or separated parents or parents living apart. Even if you cannot claim your child as a dependent, he or she is treated as your qualifying person if:

The noncustodial parent cannot treat the child as a qualifying person even if that parent is entitled to claim the child as a dependent under the special rules for a child of divorced or separated parents.

To take the credit, you do not necessarily have to claim the child as a dependent. If you have custody of the child even though you have signed a statement that entitles your ex-spouse to the child’s dependency exemption, you may still claim the credit. To receive the credit, however, you must write your child’s name on line 2 of Form 2441. To avoid questions from the IRS, you may want to attach to your tax return a copy of the signed statement authorizing the release of your dependency claim.

Charles and Katherine are divorced and share custody of their 3-year-old son, Dieter. Dieter lives 10 months a year with Katherine and attends a daycare center while his mother works. Charles and Katherine provide all of Dieter’s support. Dieter is a qualifying person, since he is under age 13, is in the custody of his parents for more than half the year, and receives more than half his support from his parents. He is a qualifying person for Katherine and not Charles, because Katherine has custody of him for a longer period of time during the year than Charles. Under these circumstances, Dieter is a qualifying person only for Katherine, even if she has released her right to claim him as a dependent to Charles by providing a signed Form 8332, Release/Revocation of Release of Claim to Exemption for Child by Custodial Parent, to Charles.

To claim the credit, you (and your spouse if filing jointly) must have earned income during the year.

Generally, only taxable compensation is included. However, you can elect to include nontaxable combat pay in earned income. If you are filing a joint return and both you and your spouse received nontaxable combat pay, you can each make your own election. (In other words, if one of you makes the election, the other one can also make it but does not have to.) You should figure your credit both ways and make the election if it gives you a greater tax benefit.

Members of certain religious faiths opposed to social security. Certain income earned by persons who are members of certain religious faiths that are opposed to participation in Social Security Act programs and have an IRS-approved form that exempts certain income from social security and Medicare taxes may not be considered earned income for this purpose. See Earned Income Test in Publication 503.

Rule for student-spouse or spouse not able to care for self. Your spouse is treated as having earned income for any month that he or she is:

If you are filing a joint return, this rule also applies to you. You can be treated as having earned income for any month you are a full-time student or not able to care for yourself.

Figure the earned income of the nonworking spouse described under (1) or (2) above as explained under Earned Income Limit, later.

This rule applies to only one spouse for any one month. If, in the same month, both you and your spouse do not work and are either full-time students or not physically or mentally able to care for yourselves, only one of you can be treated as having earned income in that month.

School. The term “school” includes high schools, colleges, universities, and technical, trade, and mechanical schools. A school does not include an on-the-job training course, correspondence school, or school offering courses only through the Internet.

Assume the same facts, except that both Ben and David were full-time students for 9 months during the year. Only one of them may be considered as having worked during the months they were students. For this reason, they would not be able to claim a credit for child care expenses.

Child and dependent care expenses must be work-related to qualify for the credit. Expenses are considered work-related only if both of the following are true.

Working or Looking for Work

To be work-related, your expenses must allow you to work or look for work. If you are married, generally both you and your spouse must work or look for work. One spouse is treated as working during any month he or she is a full-time student or is not physically or mentally able to care for himself or herself.

Your work can be for others or in your own business or partnership. It can be either full time or part time.

Work also includes actively looking for work. However, if you do not find a job and have no earned income for the year, you cannot take this credit. See Earned Income Test, earlier.

An expense is not considered work-related merely because you had it while you were working. The purpose of the expense must be to allow you to work. Whether your expenses allow you to work or look for work depends on the facts.

Example 1. The cost of a babysitter while you and your spouse go out to eat is not normally a work-related expense.

Susan is single. She began looking for a job in November 2014. Prior to this time, she had not worked. While looking for a job, she paid a sitter to watch her 2-year-old daughter. She finally found a job in February 2015. Her child care expenses during November and December 2014 were $125. Since Susan did not have income from work in 2014, she may not claim a credit for her child care expenses for that year.